Titans in the Desert

On the advice of a friend, I visited the Titan Missile Museum in Sahuarita, AZ, about a half hour south of Tucson, this weekend.  Rather than taking the basic tour, I did the extended 'Beyond the Blast Doors' tour for an extra few bucks.  It was well worth it!  This tour only runs on the 1st and 3rd Saturdays of the month and is supposed to be an hour and a half long.  It turned out to last about two hours and fifteen minutes, and was followed up by a small "class" on the development of missiles from sometime in the past until the present.  This tour takes you through the command center, the crew quarters, down to the bottom of the silo and then up to the top.

Most of the tours have actual former Titan crew members giving them and the amount of information these guys possess - and pass on to you, the tourist - is incredible!  It was a lot of fun, the guides are - as noted - extremely knowledgeable, and extremely personable.  One of our guides was Bob, a former launch commander.  So let's begin out tour: 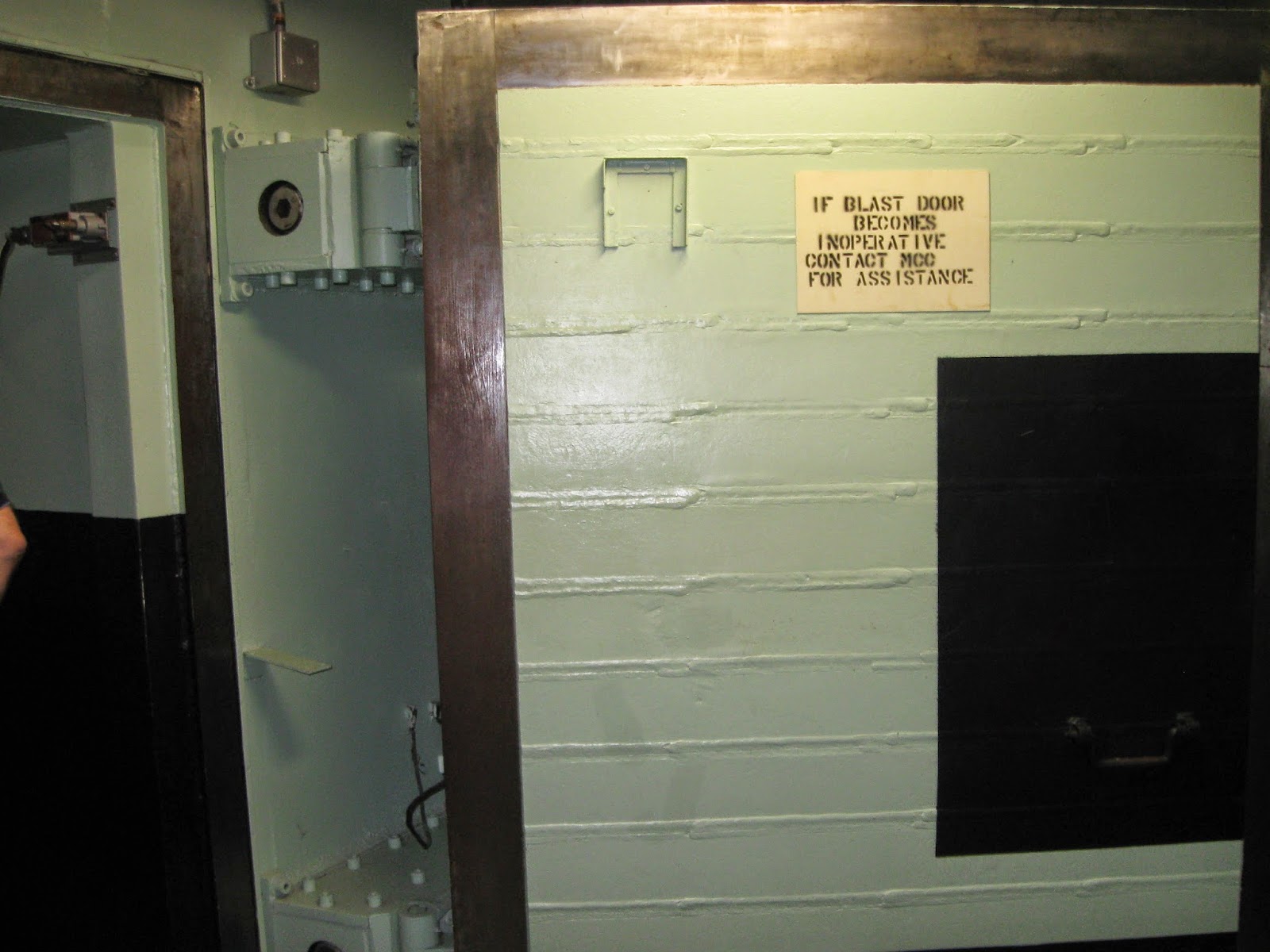 The outer blast door - 35 feet below ground level - weighs
in at three tons and hasn't sagged a millimeter in 50 years. 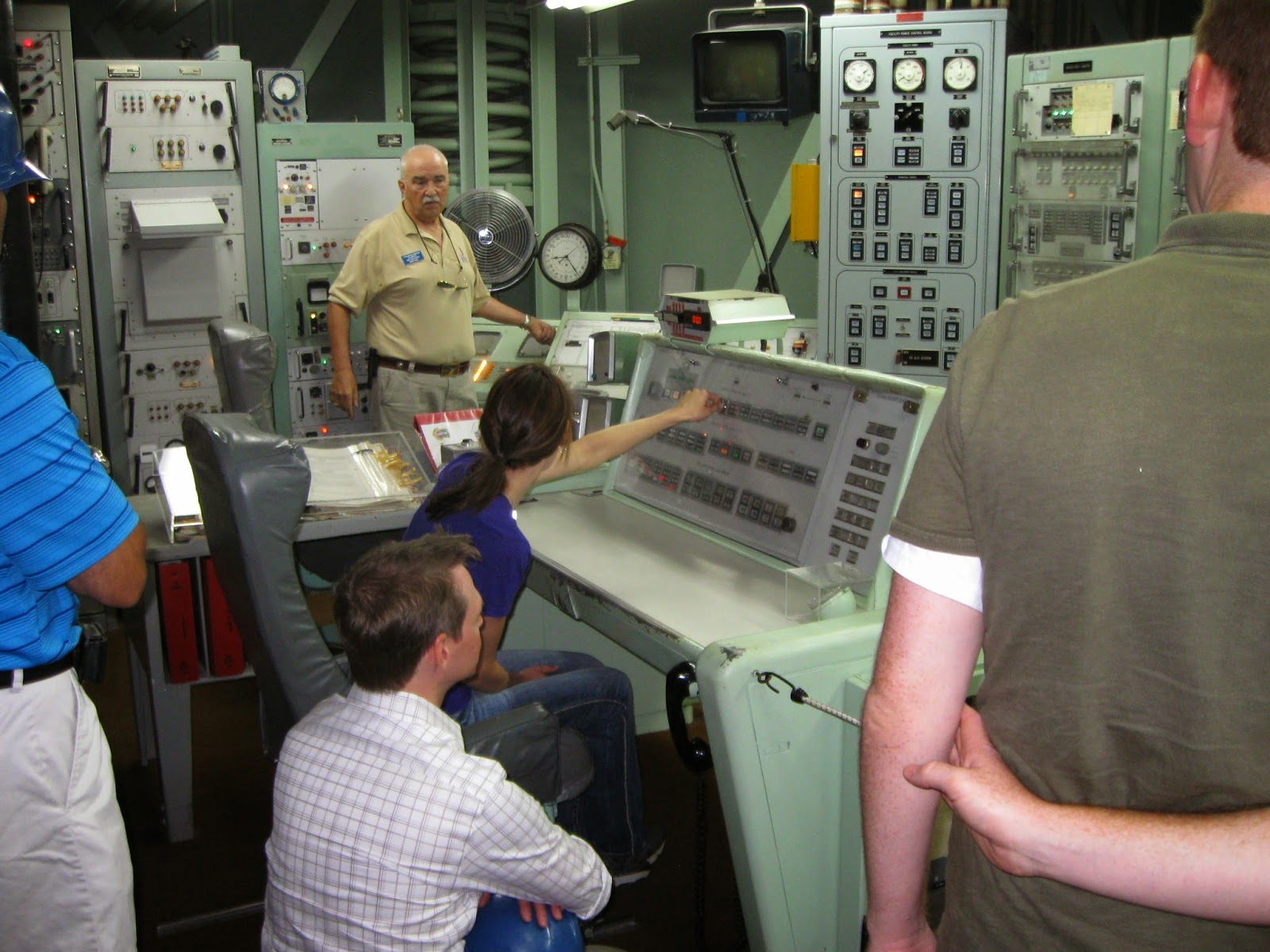 Oops!  ﻿Just launched one in the general direction of Russia!
They talked through the launch process and what it took to
send a missile on its way. 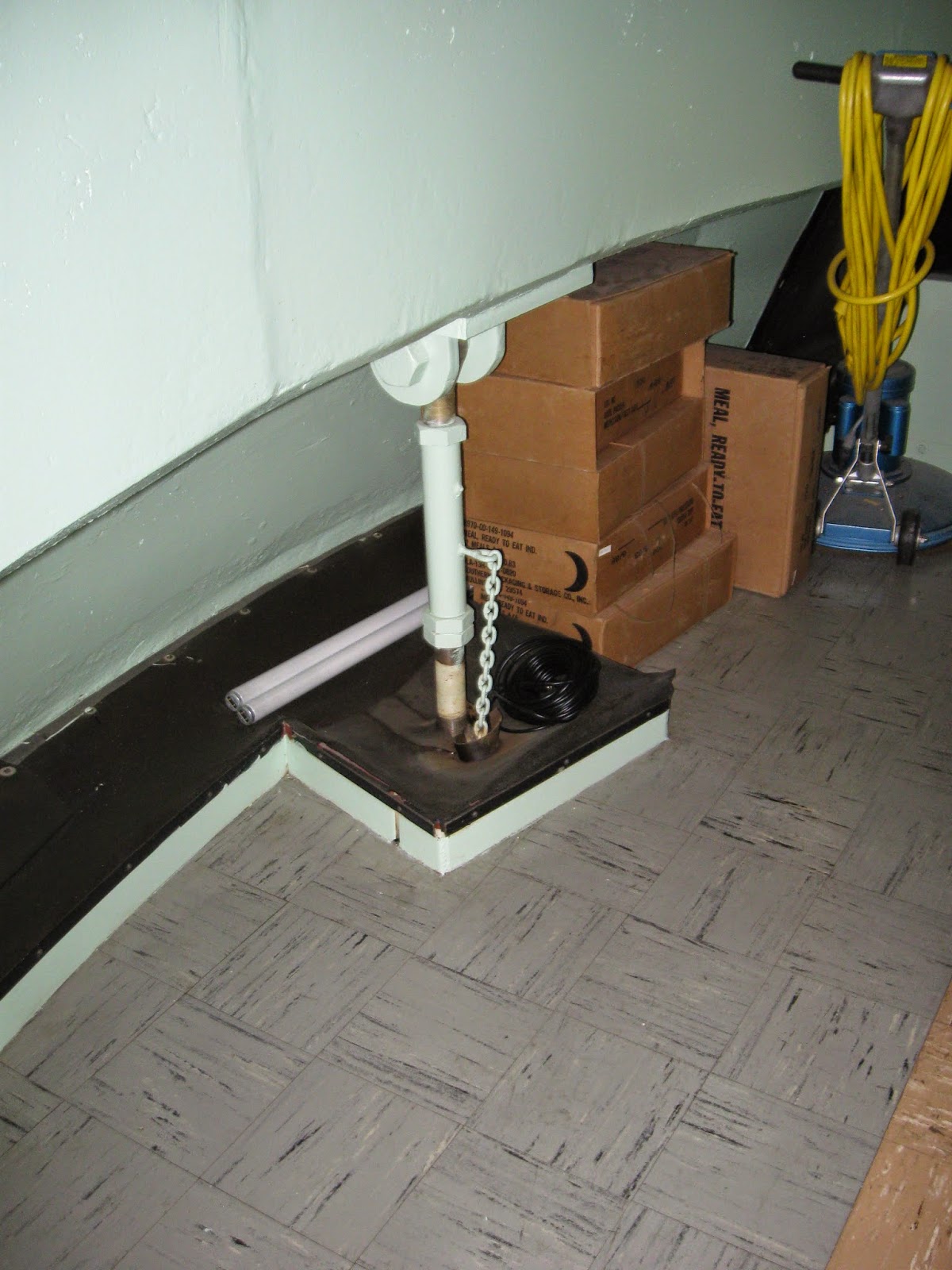 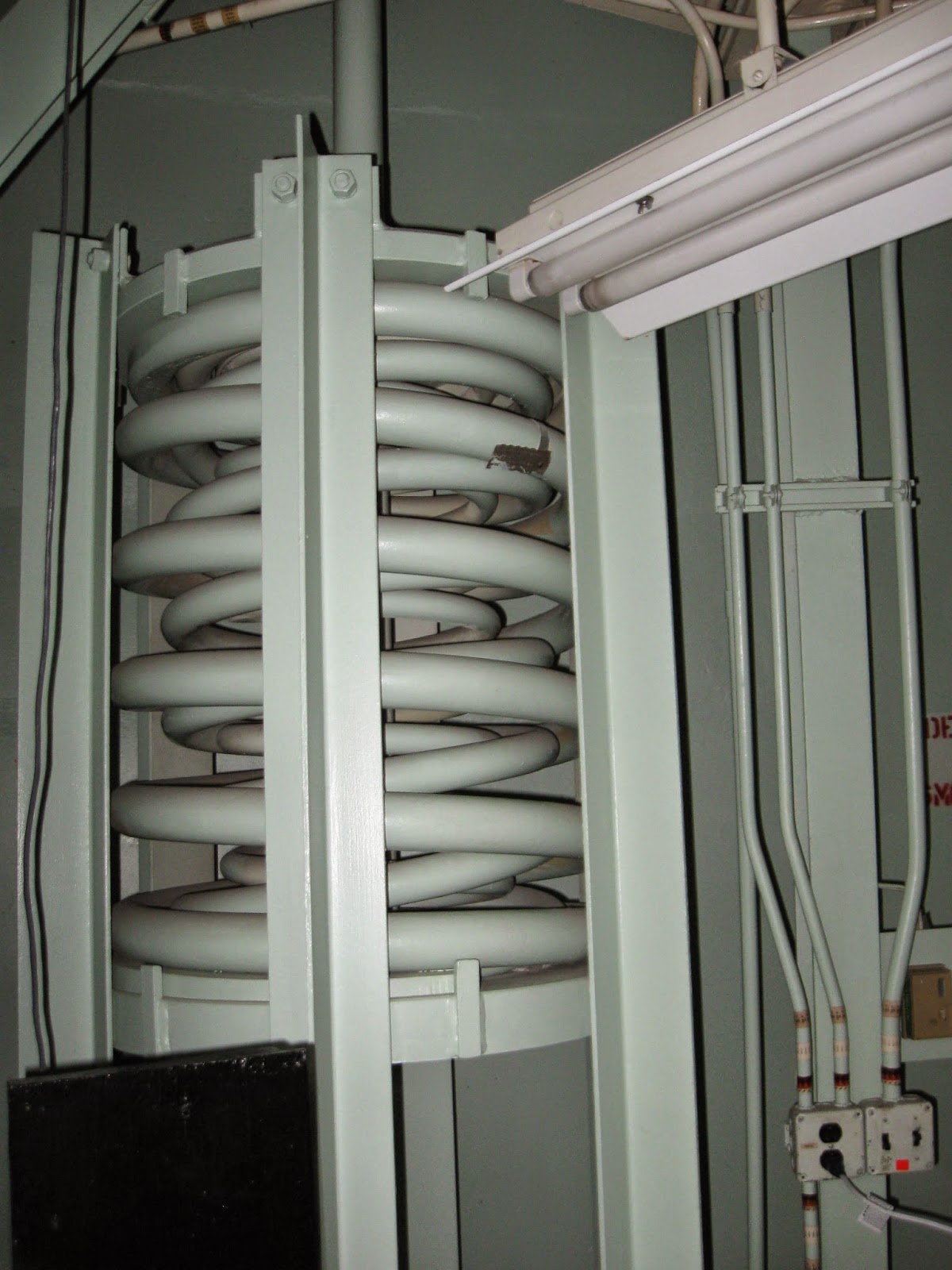 The crew quarters and command suite are actually suspended inside a
concrete dome.  At the top is the 'hook' holding the complex to the
dome and at bottom is one of eight springs that supports it.  In an
earthquake in California, the launch facility at Vandenburgh AFB
didn't feel a thing! 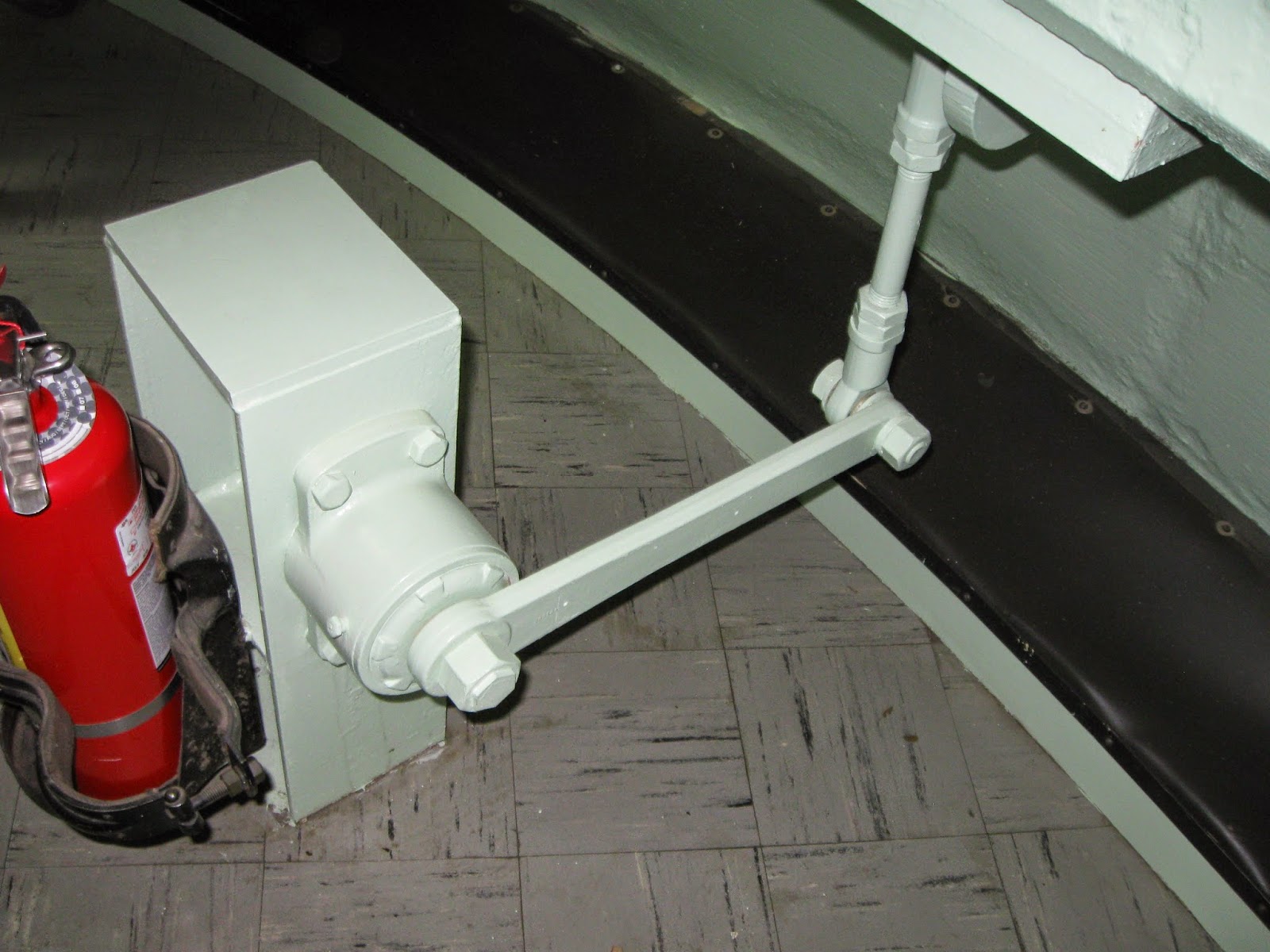 
While the springs support the weight and minimize vertical
movement, this doo-hickey minimizes horizontal movement.﻿ 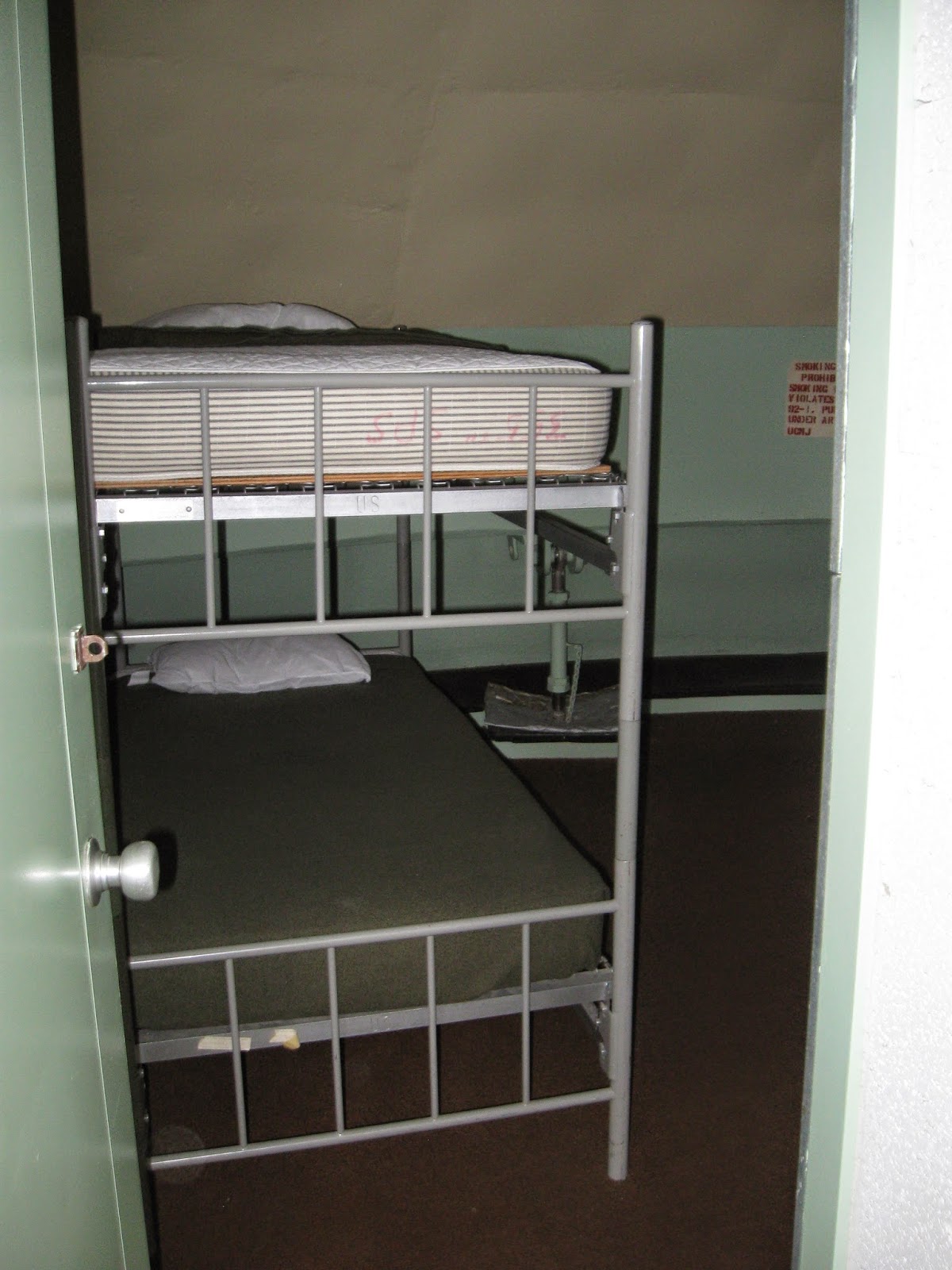 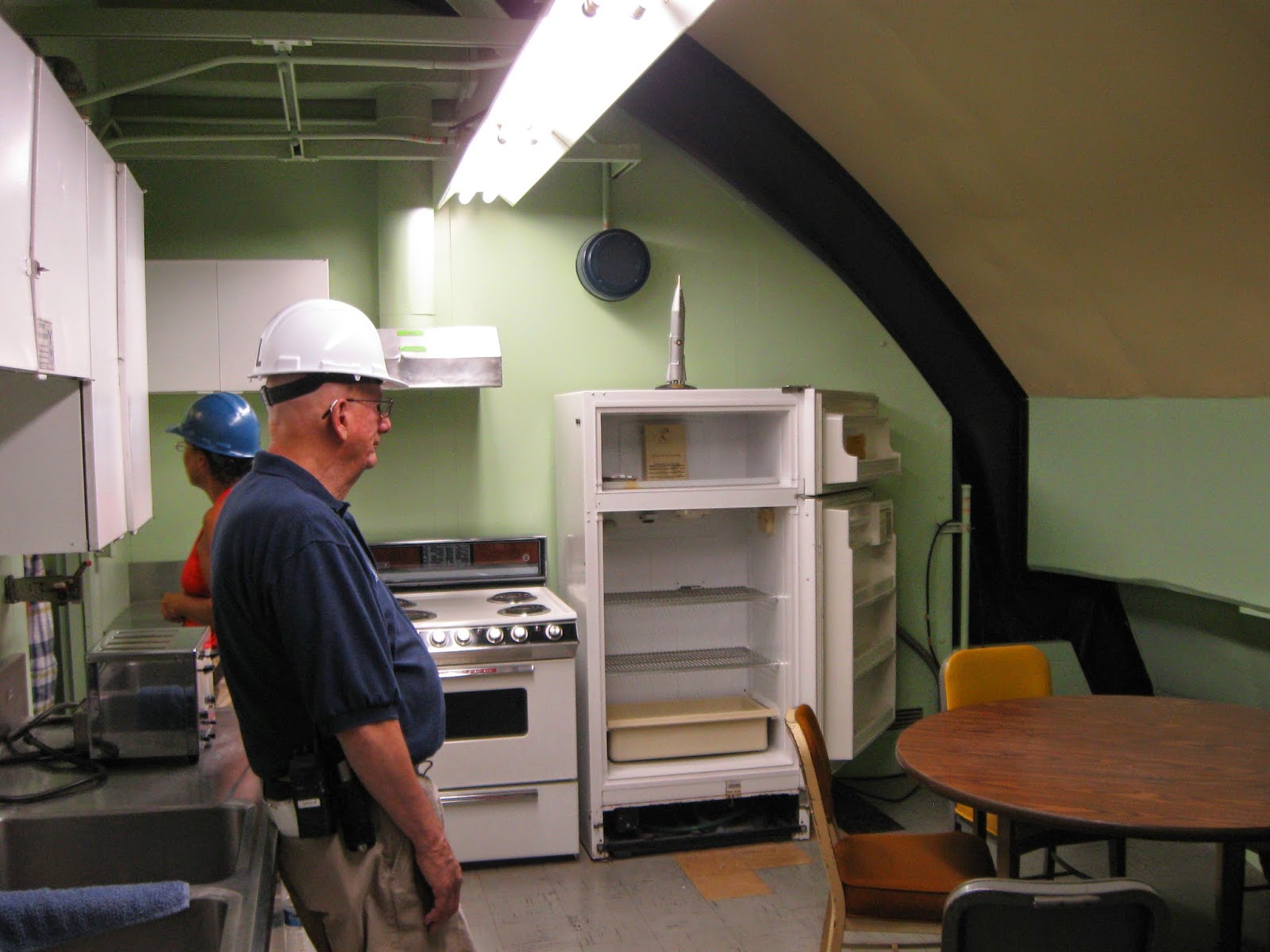 The accommodations aren't much beyond four bunks
and a kitchen.  Very little cooking was done because
everything had to be cleaned to the satisfaction of the
relief crew.  They basically lived on Twinkies and Coke
when on duty.  When females were put on the launch crews
in the late 1970s, the Air Force - in its infinite consideration
for its personnel - provided a modesty screen for the bunk room! 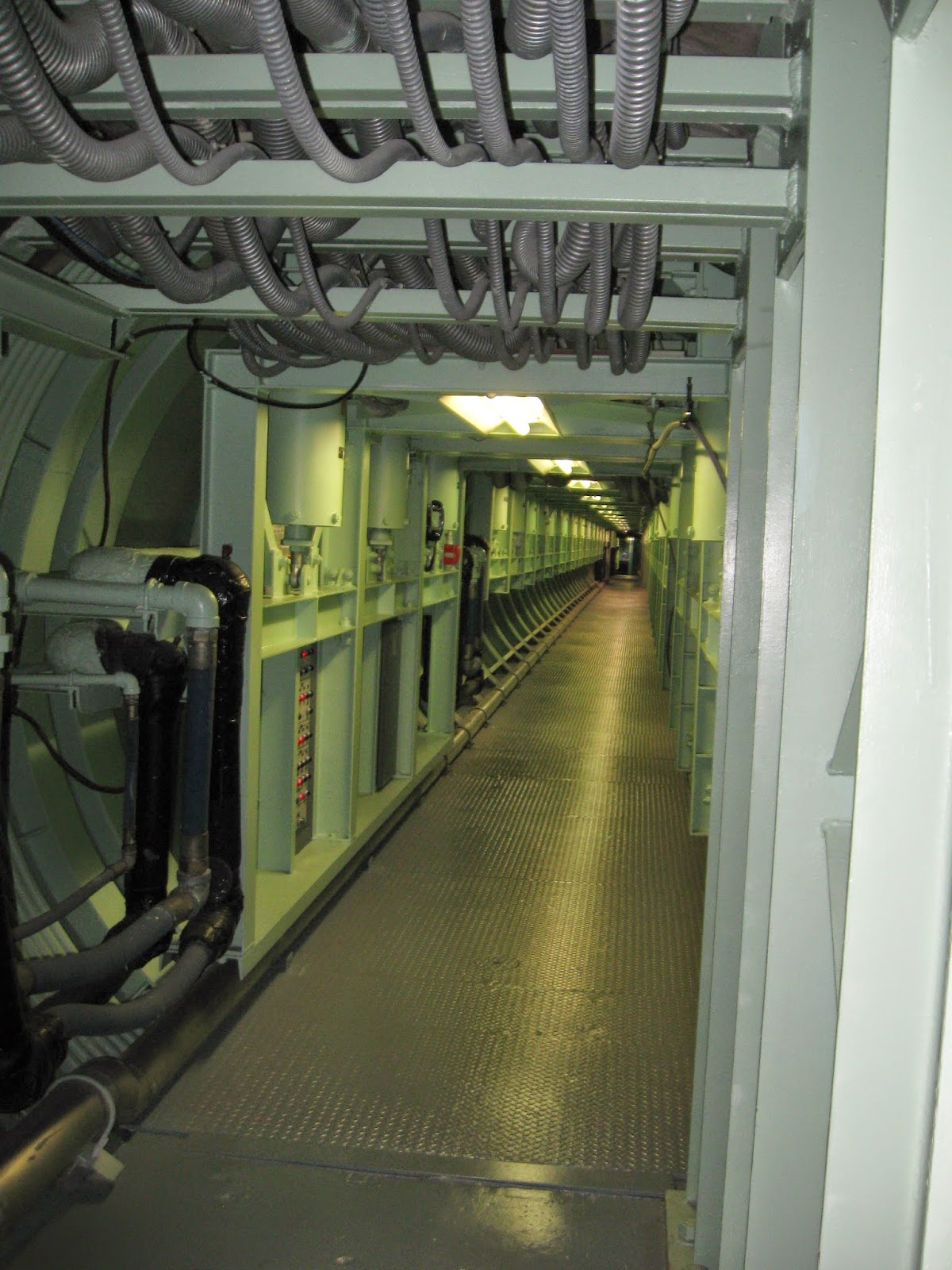 The cableway connecting the command suite to the silo.
I think it was a hundred or so feet - could be more. 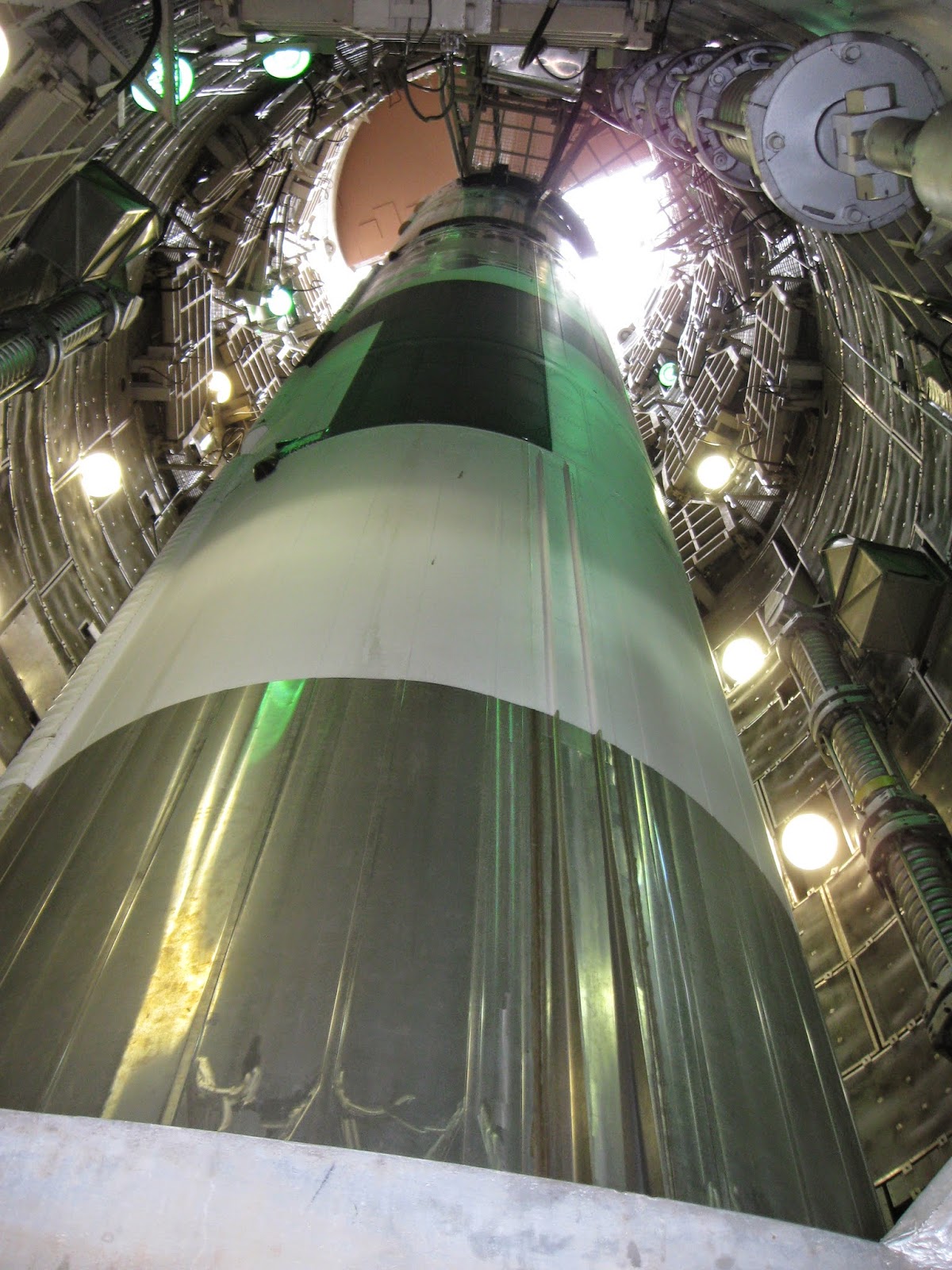 And there she is in all her glory!  From the bottom of the silo.
You can see the silo door is half open at the top of the picture. 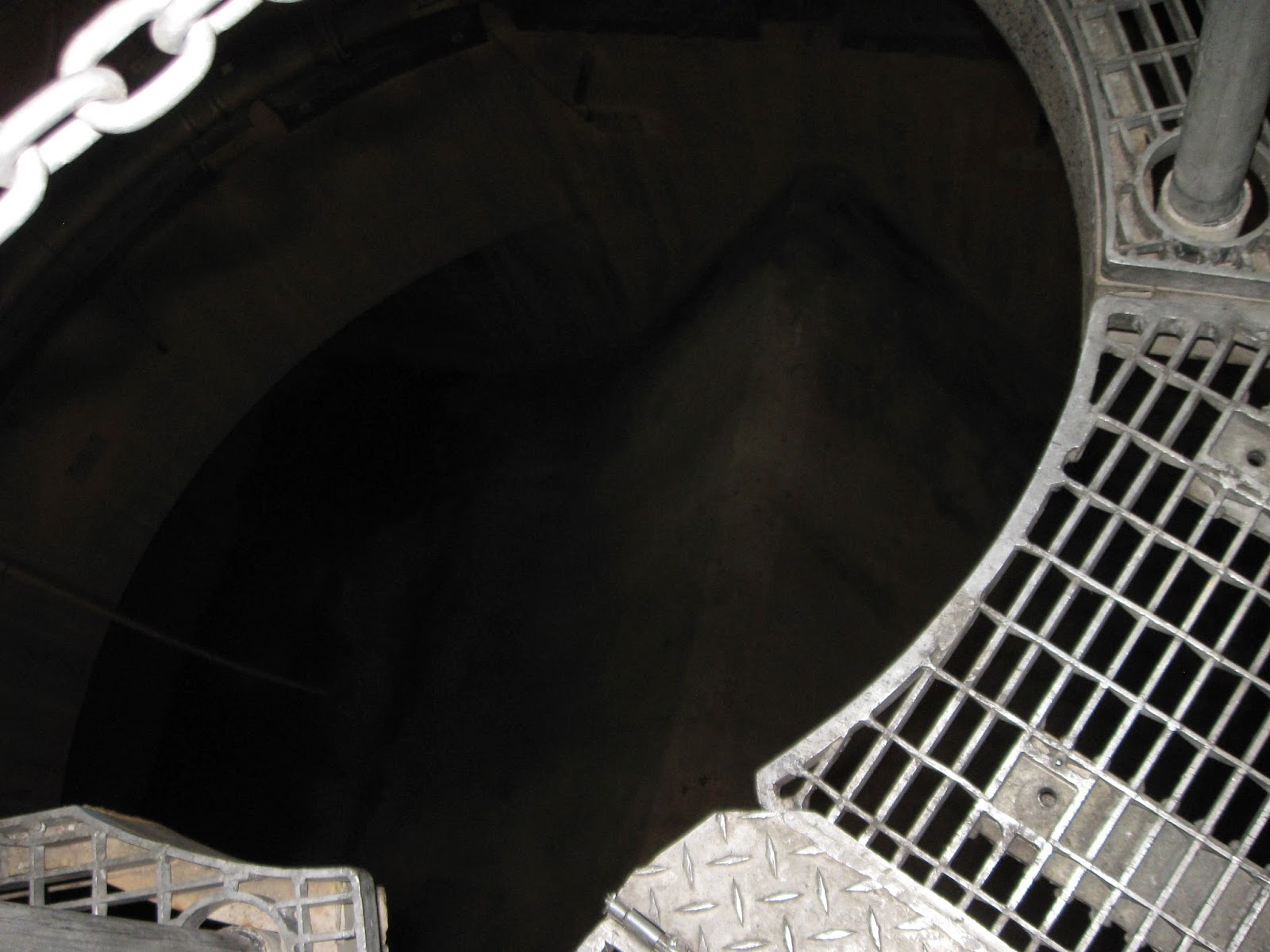 The blast well, which channeled the exhaust, steam (thousands
of gallons of water were dumped on the missile during lift off
in order to dampen the sound and vibration and converted to steam
by the heat of the exhaust), and noxious gases to the surface. 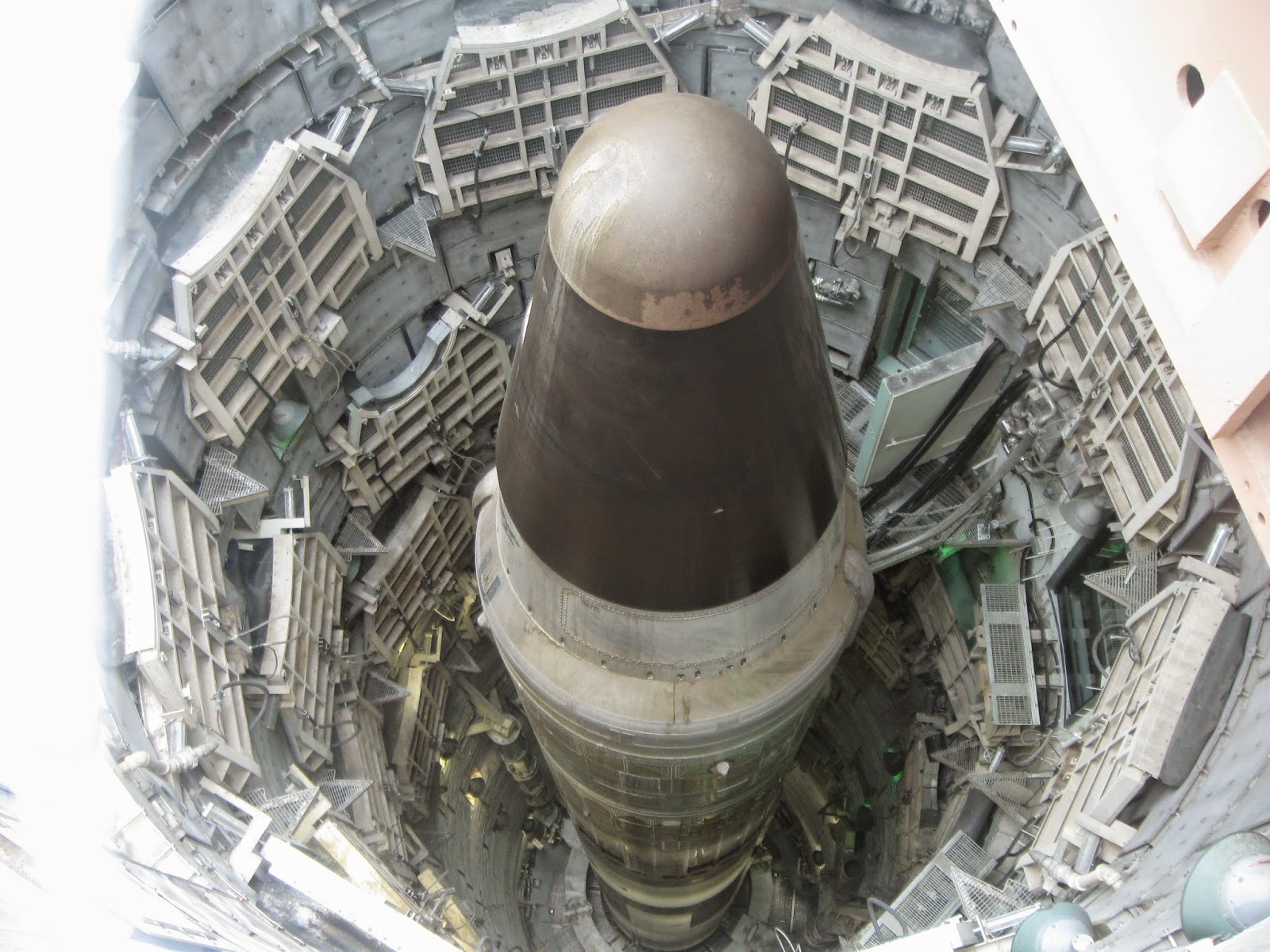 And the business end, looking through the open silo
door - visible at the top right of the picture.  To give
you some sense of proportion the missile is 103 feet
from tip to tail and 10 feet in diameter, although the
engines were removed and on display elsewhere at the site.
Just a side note, although you can't get a sense of the size
of the silo door from these photos, it weighed 760 tons.  It
was claimed that a nuke could strike within a mile of these
complexes and they could still survive to do their duty.
﻿ 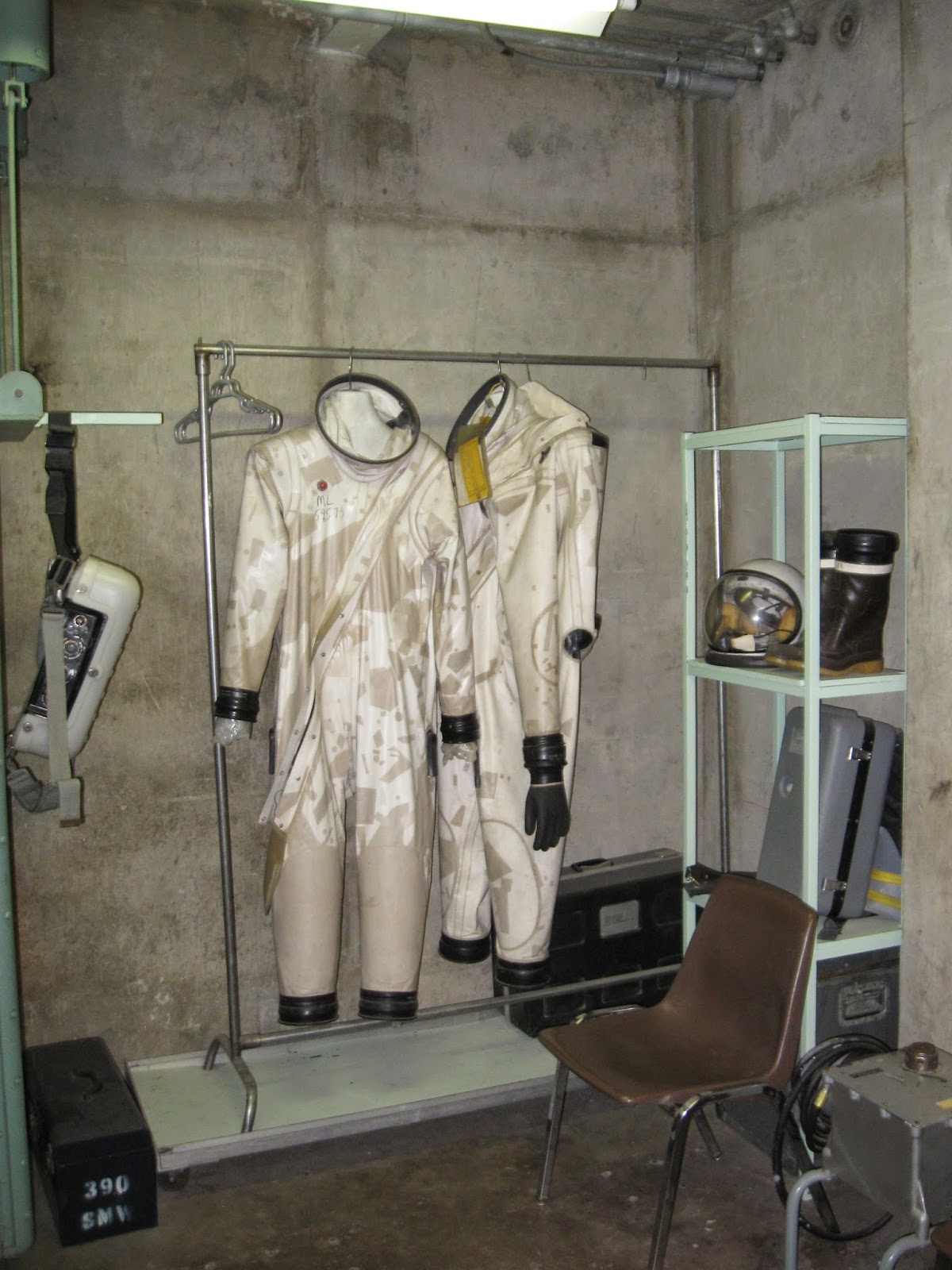 Although these look like John Glenn spacesuits, they are
actually special suits used to handle the fuel, which was
extremely corrosive. 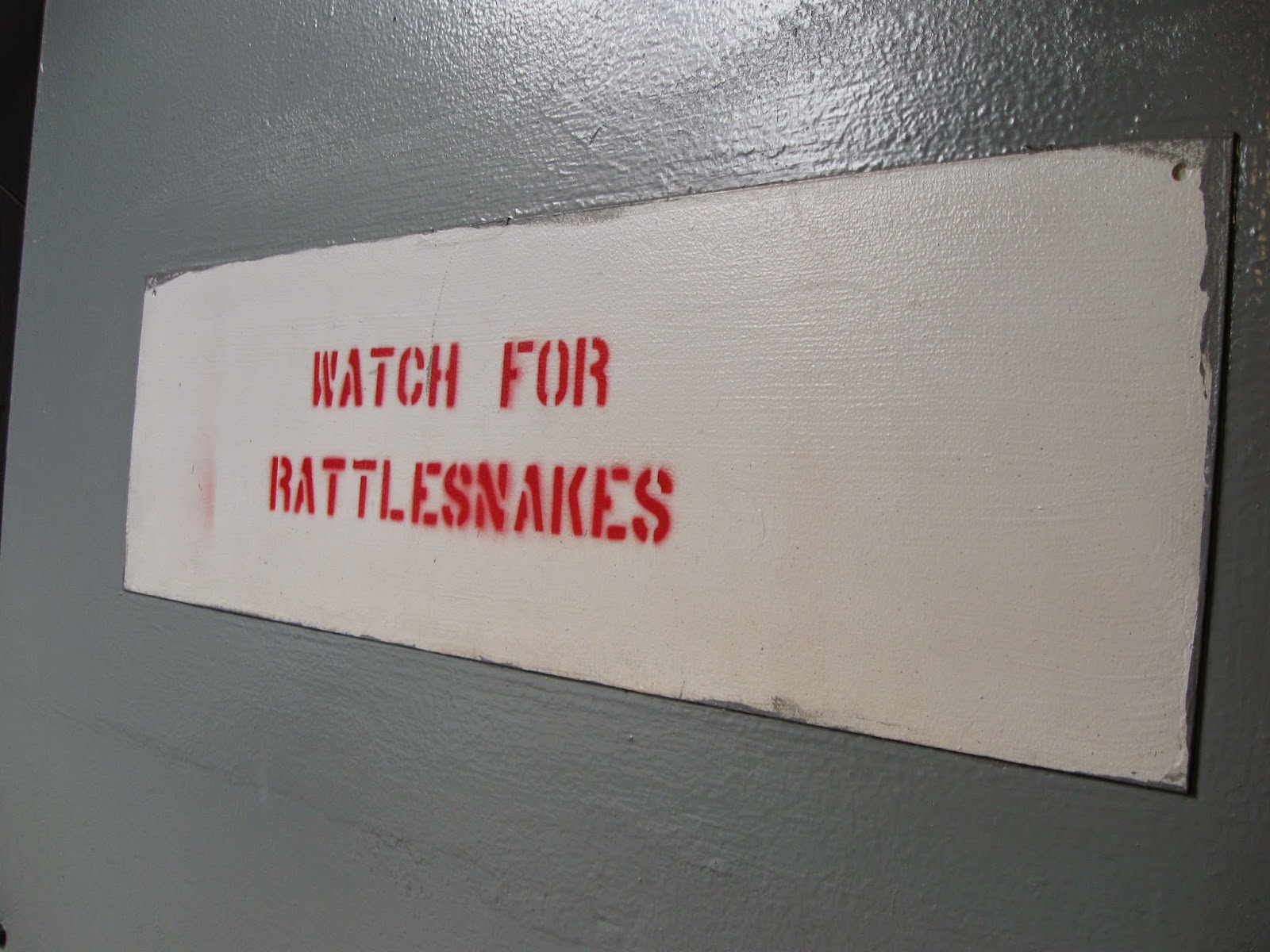 Nothing like surviving another day without mutually assured
destruction, only to get bit by a rattlesnake in the access gangway!
I hope you enjoyed this brief tour of the facility.  If you're ever in southern Arizona, it's well worth the detour to see it.  For more information, please see the Titan Missile Museum's official website here.  Thank you for visiting!﻿
Posted by Sundance at 6:59 PM