Air Battle over the Sinai

Haven't posted for a long time, but haven't played any games with my units in a LONG time, either!  We got in a short Check Your 6! Jet Age game Saturday night, pitting Israeli F-4s against Egyptian MiG-21s.  We used the stock scenario from the CY6!JA rules - First Kill: Phantom.  I had the RF-4, Perry was flying to my rescue with another pair of F-4s, and Doug and Perry's nephew Daniel each had a pair of MiG-21s.

Basically, the scenario has an RF-4 running for home with two pairs of MiG-21s being vectored onto it by GCI.  Another pair of Israeli F-4s are coming to defend it.  The Egyptians started on opposite sides of the playing mat, parallel to each other.  Daniel, being new to the game, could have set up almost on top of the RF-4, but didn't realize it and set up a whole area back from it.  I actually could have escaped, but just for gamesmanship, I suggested we move the planes back six hexes since Doug's playing mat is a little small in terms of number of hexes.  There hadn't been ANY action to that point in the game and didn't think it would be too fun to finish the game without any shooting.  This gave me an extra turn on the board. 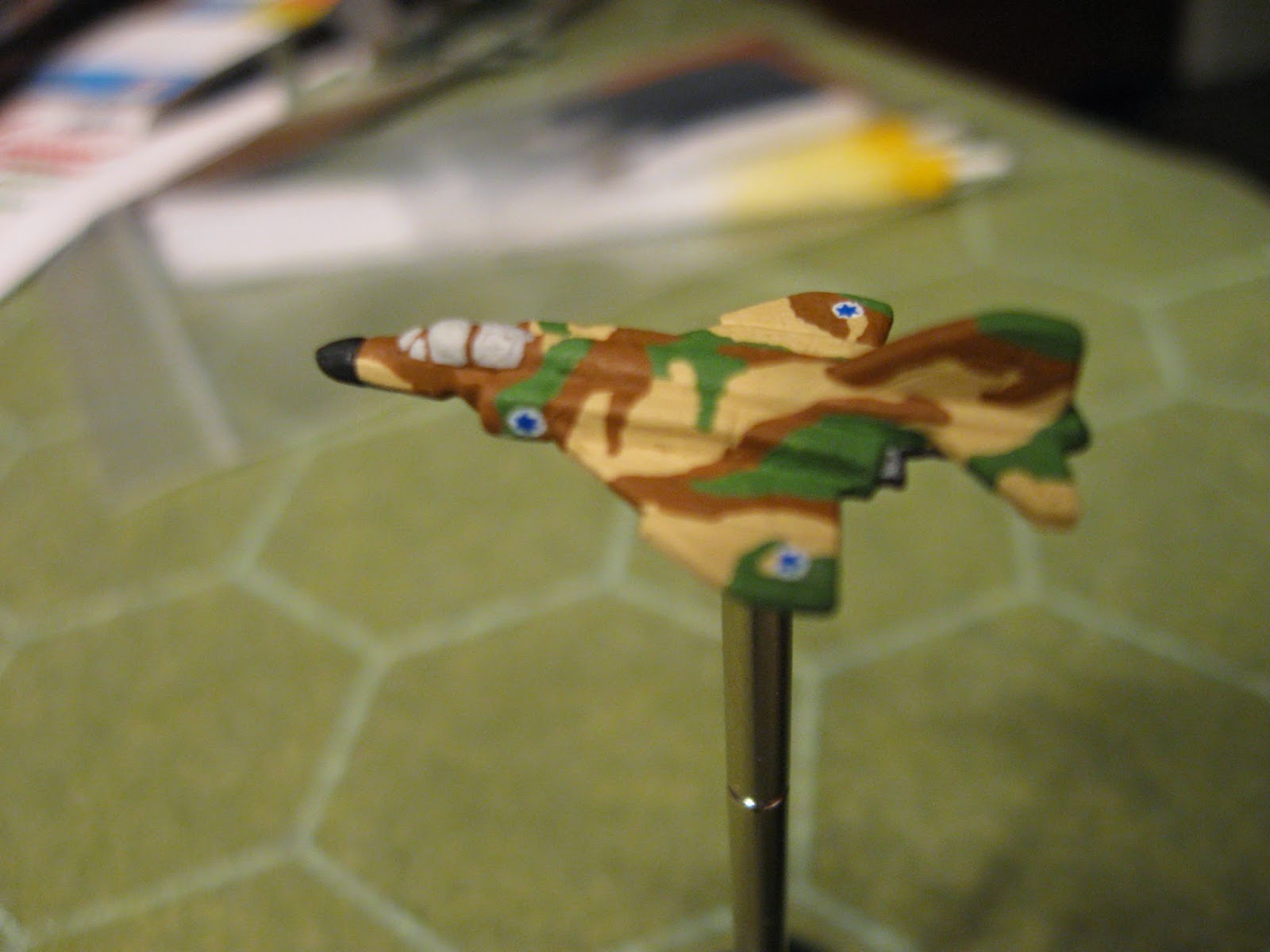 I was running at an angle to the Egyptians.  I couldn't turn away from them.  Although this would have given me the exit sooner, it also would have exposed my tail to their heat-seeking missiles.  They caught up to me, though, and at almost optimal range Daniel and Doug each launched two missiles and Doug's other plane fired his cannon. 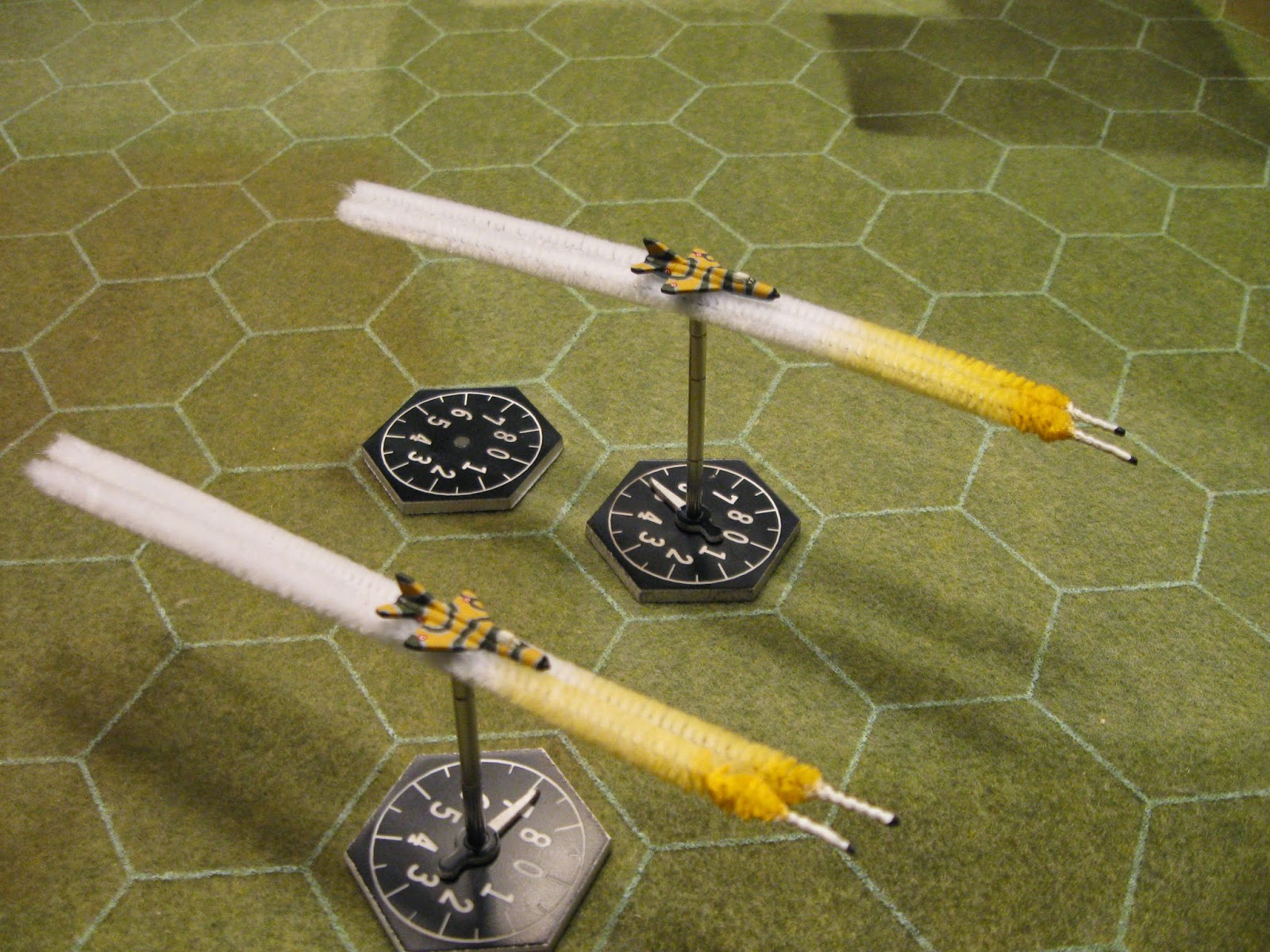 Daniel's second missile obtained the kill before Doug even got to roll.  Perry was on the opposite side of the board from the Israeli friendly board edge so we decided to fight on, and I took over Perry's green pilot, while he continued with the skilled pilot.  I was able to get my revenge and shoot down Daniel's green pilot with my cannon, but his veteran finished me off in a head-to-head shot, while I missed.  And with that we decided to call it a night.  Not a bad tally for me - one kill, started with one plane and ended up losing two! 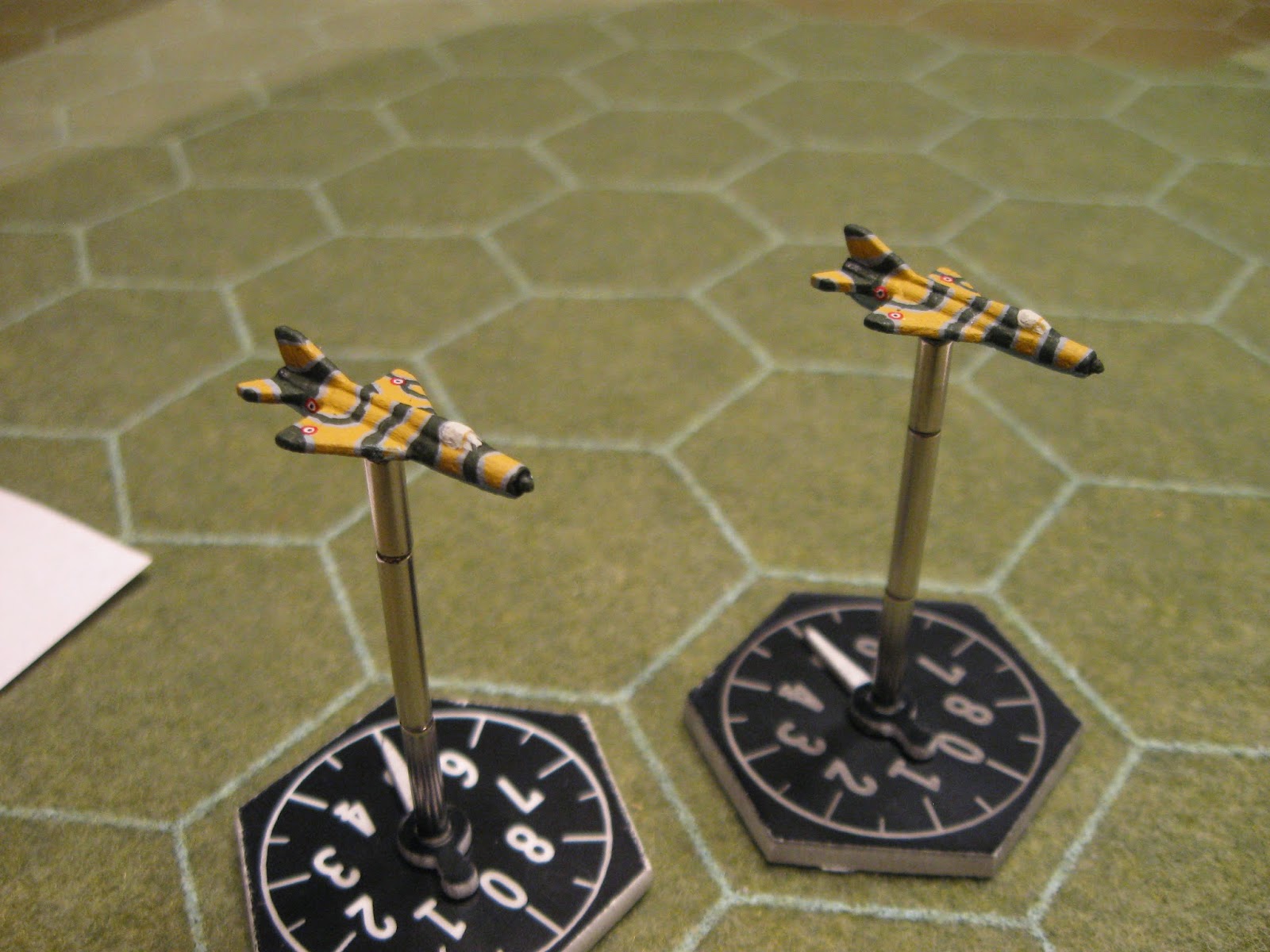 This is the second Arab-Israeli air battle we've done and both times the Israelis have had their hats handed to them.  Not sure how that bodes, but it was fun anyway!  I really like the way my F-4s turned out.  I'm not quite as happy with the MiGs, but they look ok.  It's hard to see in these pictures, but there are thin light grey stripes on each side of each of the dark green stripes on the MiGs.  I have another pair of Egyptian MiG-21s to paint up and they are going to be in Nile pattern camo (which I like much better), when I get around to it.  The aircraft are from Tumbling Dice, and the stands and missiles are from Fight's On!  (And I should mention the decals are from Dom's, of course!)﻿
Posted by Sundance at 4:35 PM