A couple of weeks ago we had another Old West shootout.  Usually we use Desperado, but this time we tried Six Gun Sound since we used NUTS! a few weeks ago for the battle for the Hornet and I use ATZ for zombie gaming.  Seemed to work fine - all we did was sit there and shoot at each other 'til one side was dead. 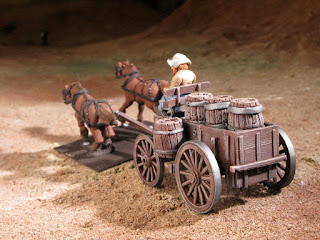 Perry took this very nice picture of my Dixon wagon
(used with his permission).
Basically, two miners were hanging around outside the mine, waiting for the wagon to return from town with supplies when three claim jumpers rode up and tried to finish them off. 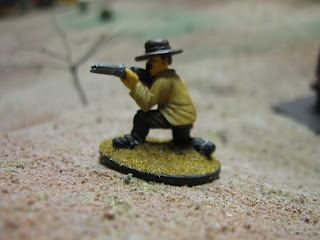 One of the claim jumpers stopped on a hillock in front of the mine (above) to try to hold the miners down while the other two rode up each side to outflank them.  Here's one of them taking cover behind some scrub (below). 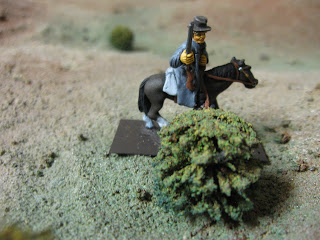 If we had thought it out and done some prior planning, we (I was a claim jumper with Perry, while Doug and John were miners) might have at least been able to run off the miners pack mule, if not gotten control of the wagon and headed it off, also.  ﻿ 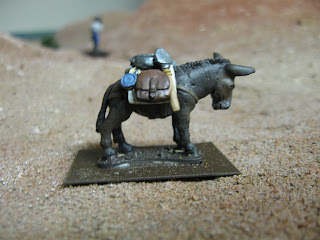 Below is an overall pic of the table, also courtesy of Perry.  This is actually the third or fourth game we played on this particular table set-up, including a 28mm Sci Fi game and at least one other.  The mine entrance is at the top of the picture, behind the wagon, fire and mule.  You can see one claim jumper on the hillock in the center, one behind the bush to the left of the mine entrance and one partly behind the hill the mine is in, along with one of the miners. 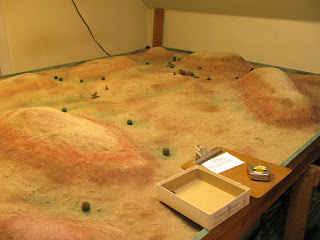 We couldn't play tonight, but I'll be running another WWII game next week using NUTS! so stand-by for more action.  Next week's game will be Brits vs. Germans in Norway...with a twist!  In the meantime, though, happy gaming!﻿
﻿
﻿
﻿
Posted by Sundance at 1:42 PM