I frequently peruse the local Goodwill stores.  You wouldn't believe some of the books I've come across in them and at .50 to $1.50 or so per, it's a good deal for me.  I'm a book junkie and have actually read most of the hundreds of books that I own.  I never stopped to count, but I would guess in my life I've owned well over a thousand books, but have paired the collection down to pretty much just military history and the stuff I was studying in grad school.  My wife says I should get rid of them once I've read them, but I frequently go back to books looking for scenario ideas, details of battles or things of technical interest mentioned in them so I hang on to them.  But I digress.

On my last few trips, I noticed a Stratego game in good condition on the shelf, but passed it up despite fond memories of playing it against my older brothers as a kid.  I finally decided to go ahead and get it, and fortunately it turned out to be complete.  When I got home, I just left it on the piano bench in plain sight.  The kids saw it sitting there but didn't show much interest in it for a day or two until my 6-year-old asked me about it.  I took it out, explained the pieces to him and we set up and played.  I have to admit I slaughtered him, which wasn't too difficult, but each game got a little better and a little more difficult as I explained different strategies to him and he started to put them into play.  This was the final location of all the remaining pieces on our third game.  The little bugger almost got me! 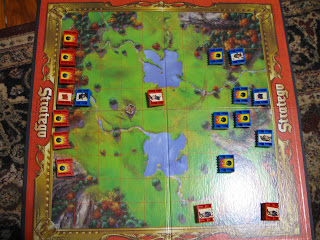 I was blue; he was red.  As you can see, it wouldn't have taken much for him to win.  You can also see, he didn't quite get the idea of 'surrounding your flag with bombs'.  After seeing us play, his 9-year-old sister decided she wanted to play too, so they set up a game and played three straight with him winning each one.  A day or two later he won another one, but she beat him in the fifth game using his own strategy.  She complained loudly that he was putting his best pieces in the front line and killing her with them, because she put her weak ones in front.  I explained to her that rather than trying to make him change how he was playing to suit her, she needed to adapt her set-up and play to challenge him.  Obviously she put that advice to work for her.

I guess some people would question my parenting, slaughtering my kids in games like that, but when I was a kid we were taught to play the game, then you played it to the best of your ability win or lose.  My parents never threw a game for our benefit and we had to fight long and hard to start to win games, which also carried over to playing against my brothers, seven and nine years older than me.  You learned to be a modest winner and not to be a sore loser.  I played my father in chess for five years before I finally beat him at age 12.  It was another two or three years before I could beat him fairly regularly, but no game meant as much to me as that one when I finally won.  I don't remember the placement of the pieces on the board, or the winning move, but I remember how good I felt.

On the other hand, my daughter loves Settlers.  As a family, we have been playing it for a couple of years now and she has won a few games against the rest of us in it.  I think she even beat one of the guys in my game group when he came over to play with us one evening.  That is a source of pride for her.  The little guy regularly gets to 5 or 6 points by the end of the game and typically all he does is build a road in a circle around a tile with two or three settlements on it, then spends all his resources buying pick-a-cards.  He regularly has to or three victory points from that, and sometimes gets the Largest Army card out of it.

I'm getting ready to start teaching the girl some actual war games.  She played a game of Check Your 6! Jet Age with our game group, but it was her first game and she didn't really understand it.  I'm going to start her on the Blue Sky series (actually a World War I on-line variant of Blue Sky, then move on to Blue Sky WWII proper because the WWI planes are slower - I think that might help her learn to judge maneuvers against another moving plane) and work her up to CY6! and then JA.  Although the movement charts are right there in front of you in CY6!, I think it's a little more difficult to maneuver than in Blue Sky and the other rules aren't as intuitive unless you're a little more experienced and familiar with the game.  I also want to teach her Action Stations (mainly because I'm itching to do battle with my 1/1250 Figurehead ships and CAP Aero planes that I've worked so hard to paint).

I have another post I'll put up later this week on the Old West game we played Saturday night.  Until then, happy gaming!
Posted by Sundance at 6:14 PM