Meanwhile, in the Channel...

So it's been a while since I've posted despite having two games in quick succession a month or so ago.  I'll post the first game here and the second game in a separate post.  Unfortunately at this point, I don't remember much of what happened in the first game except that everyone enjoyed it.  It was our second coastal game, but our first using Action Stations (for the first game, a few years ago, we used The Quick and the Dead). 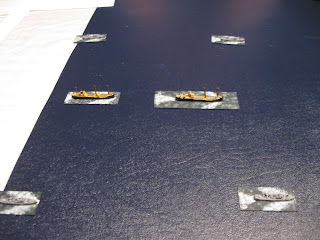 We had a small German convoy, escorted by four R-boats, attempting to transit an area when they were accosted by a British patrol of two MGBs and two MTBs (below). 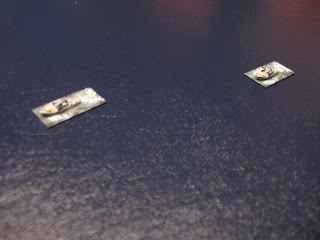 The British came in from the German port quarter and in the initial exchanges of fire, a couple of the R-boats were damaged and forced to slow.
﻿ 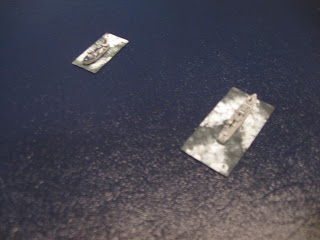 This played havoc with maneuvering and timing, and resulted in the starboard R-boats not even really getting into the action aside from long range shots.  In the shot below, the good order R-boat is trying to pass the damaged one on the starboard, but can't get around it in time to affect the British attack. 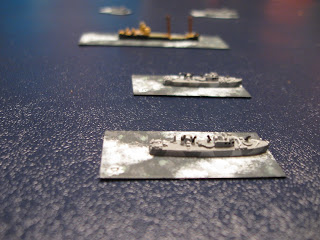 In the end, the MTBs fired torpedoes at the freighters, which either missed or ran deep.  The port-side R-boats were in the thick of things from the beginning and both were heavily damaged in running fights with the British boats.  Here, two MTBs are closed by an R-boat, while an MGB turns away. 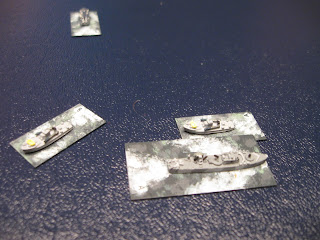 I'm not sure we really decided a victor for this one, but I'd give it a marginal British victory.  They did more damage to the R-boats than they received, but the ﻿coasters - the real target of the attack - received no damage whatsoever.
We'll probably play some more coastal games in the near future.  It was quick and fun - it was actually the second game we played that evening.  Not to mention that I want to learn these rules well enough so that I can use them at conventions.  I have a pretty extensive collection of ships and can put together a convoy of fifteen or so freighters and trawlers, plus escorts, so the variety and replayability are pretty high.
﻿
﻿
Posted by Sundance at 11:54 AM