A Hornisse in their Midst

A couple of weeks ago we played our first all out NUTS! game, based on a real situation that took place in Russia around 1943.  Three Hornets were helping defend a small village against Russian counterattacks.  If I remember correctly, the village had changed hands a couple of times and they had been fighting over it for a few days.  At the point where the Russians were finally going to overwhelm the German defenders, two of the Hornets pulled back, the third having been disabled.  They had knocked out several T-34s amongst the attackers.  Concerned that the Russians might be able to fix the Hornet, or have another one that they could use to cobble together one functional vehicle, the crew volunteered to sneak back into the village that night with satchel charges and completely put the Hornet out of action.  With a covering force of a squad of grenadiers, they snuck in and blew up the Hornet, while the covering force had been discovered and got involved in a firefight with the Russians. 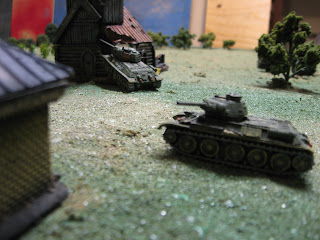 The village included half a dozen buildings and two knocked out T-34s. 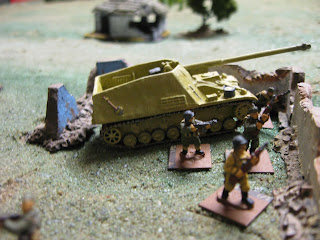 The Russians only knew to expect a counterattack so set up in a 360 defense around the village.  Just by chance, they set up a full squad in the yard where the German objective was located. 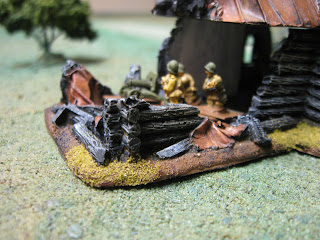 The Russian HMG was located in the back of a smashed church on the opposite side of the village.  It ended up not playing a role as the Russians didn't know what to expect and kept it in place even after the attack started expecting an additional attack from another direction. 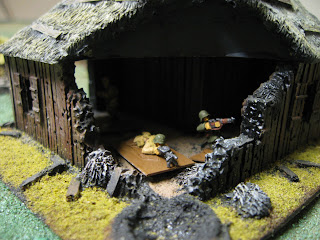 Half of a Russian squad set up in a demolished building. 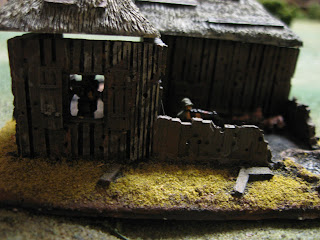 The Russians in the other half of the demolished building.

The Germans made a direct assault with one MG section and the Hornet crew against the wall. Most of the game was trading shots back and forth across the wall (see below).  They shot at each other without hitting anything for a long time.  Then the Russians got the idea to prep grenades.  The Germans beat them to it and one grenade cleared the wall. 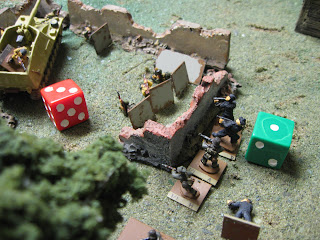 That solved most of the Germans problem.  The Russian in the Hornet pulled a grenade but was shot before he could throw it, dropped it in his death throes and rolled a 2, destroying the Hornet in the resulting detonation of the vehicles ammo.  Game over.  Since the Germans then retreated, both sides accomlished victory conditions of sorts.  It was a fun game and we'll definitely be doing NUTS! again.
Posted by Sundance at 4:20 PM