We finally played a game of Check Your 6! that I've had in the works for about three years.  The planes have been mostly painted for about two years, and I finished them up a year or so ago, but never got them decaled and sprayed until this past weekend.  This scenario is a historic battle in which two Fairey Fulmars escorted six Fairey Albacore in an attack on an Italian battleship (don't remember now which one - I'd have to dig out the source and look it up again).  On the way to their target, they were intercepted by two Ju-88s.  I remember historically, the Fulmars beat off the Ju-88s, but I don't recall the results of the attack on the battleship.


Perry and I flew the Albacore, Perry's son, Calvin, flew the Fulmars, and Doug took us all on with the Ju-88s.  Here's what happened in our refight of the battle:


The Ju-88s immediately turned towards the British squadron, while the Brits focused on the ship.  In the first pass, the Fulmars overflew the Germans, but fortunately remained undamaged - no harm, no foul. 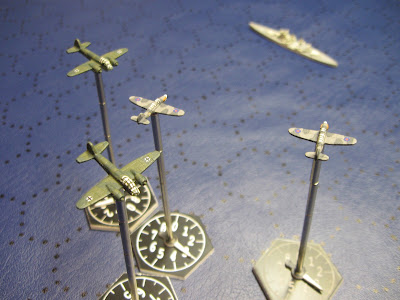 While the Fulmars repositioned, the Ju-88s flew through the first section of Albacore, but drew no damage again. 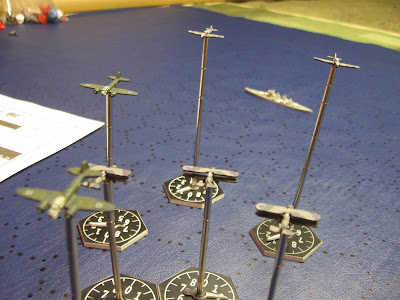 The Fulmars got first blood with an engine hit on a Ju-88, which left the table at that point.  The Albacore are just about in position. 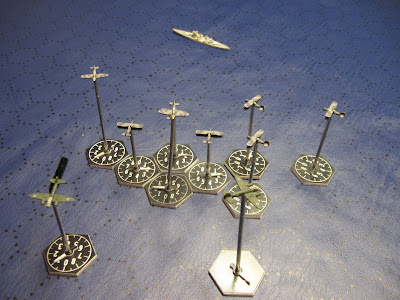 The first section of Albacore line up to drop their torpedoes.  The second Ju-88 took airframe damage, but flew on, hoping to take out an Albacore or two.  ﻿ 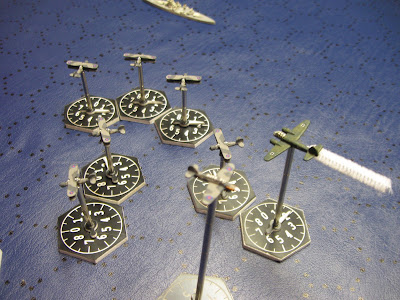 The Albacore lined up to drop torpedoes.  They were too high and too fast coming in and actually had to overfly the ship and turn back in to drop. 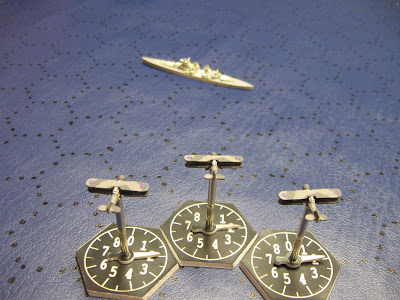 One took an engine hit and had to jettison his torpedo before the attack run. 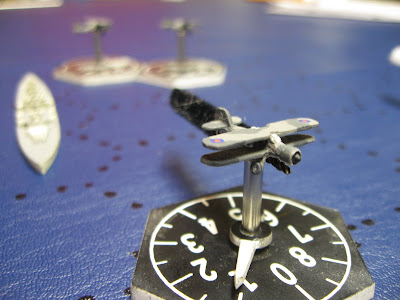 The Ju-88 tried to finish him off, but missed. 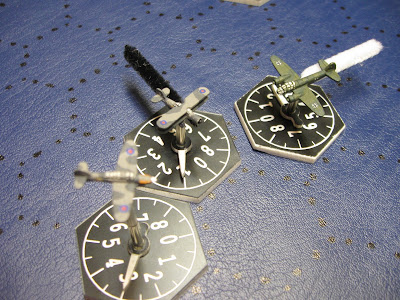 In this turn or the next, the last Ju-88 took his second damage and was lost to the sea. 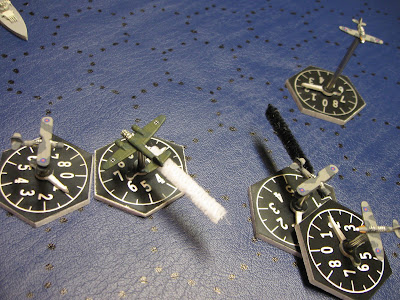 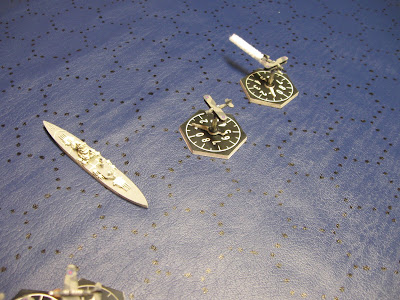 In the end, five of the six Albacore were able to launch and the battleship took three hits, which we determined was enough to slow her down but not enough to sink her.  One Ju-88 was shot down and one was forced off the board with engine damage.  I think three, and maybe four, of the Albacore were hit, all by AA fire from the ship.  Neither of the Fulmars were hit.  I think we miscounted the AA and the Axis should have actually had an additional shot each turn.  It was a fun game - low and slow, but with lots of action.


The planes are by Tumbling Dice.  Pretty much all of my WWII planes are 1/300, but I wasn't about to buy and assemble six Albacore in 1/300, so I went with the 1/600 for this game, at least.  Decals are from Dom's, of course!  The ship is GHQ 1/2400.  Doug didn't have any Italian battleships, so we substituted a Brit.  Shhhh!  Some of you might ask about the game mat.  It's home-made - marine vinyl with hexes marked out with Sharpie.
Posted by Sundance at 7:55 PM