After my daughter left, I had to go out of state for a while with the National Guard.  When I got back, my son came for a few days.  One of the things I wanted to do with him was a LEGO game I had devised using the deep sea exploration sets.  I had a specific idea in mind that I wanted to test with him, but - as with everything - once he got a hold of the idea, he ran with it and I lost all control!

The concept was that there were two teams - the Good Guys and the Bad Guys.  The Good Guys were trying to recover treasure and artifacts for museums, etc., while the Bad Guys are trying to recover the same for their own greed.  In addition, that Bad Guys could take treasure from the Good Guys on a limited basis.  The seafloor was simply a piece of muslin marked off in 6" squares.  Each square had six levels - the surface, the seafloor and four levels in between, represented by clear plastic cups.

When the seafloor in each square was "explored" (by having a bathyscaphe or diver enter it), a chit was drawn to determine whether they found nothing, a shark or octopus, treasure, or both a creature and treasure.   If there was nothing in the square, the chit was left in the square to indicate that it had already been explored.  The creatures also moved each turn along with the bathyscaphes and divers.  The creatures couldn't do anything against a bathyscaphe, but if they ended up at the same level and same square as a diver, the diver got eaten.  That happened a couple of times.

The Good Guys had the recovery ship and the Bad Guys had a Zodiac.  The recovery ship and the Zodiac could move as well.  I think Junior threw in the police boat at some time as well, but I wasn't sure if that would be too much for the Bad Guys since the game seemed to favor the Good Guys.  Of course, he also gave the Bad Guys the underwater lab, so they had a separate base of operations as well.  I foresaw the lab and some of the other features of the sets as separate games rather than throwing everything into one giant game.  The basic concept worked, but was rather muddied by A adding so much stuff to the game that I hadn't intended. 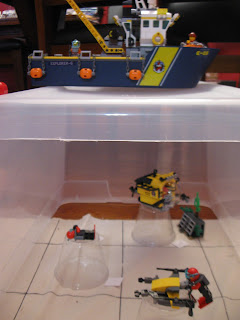 The recovery ship hovers over two divers (one with a dive sled),
a bathyscaphe, and a treasure site. 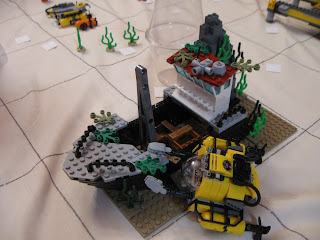 The main treasure, being explored by a bathyscaphe. 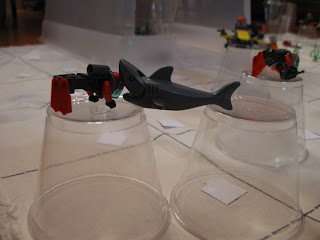 A diver being eaten by a shark, with other divers in the background watching,
no doubt, in horror.

A also likes to play games with my friends, so Perry obligingly came over one night for a game of Seafarers of Cataan.  When Adam was younger - even until the last couple of years - his main strategy was to build a village or two as opportunity presented, but to rely on pick-a-cards for his points.  He'd usually come up with 6 or 7 points at the end of a game that way while the rest of us were within a point or two of winning ourselves.  As a result, neither Perry nor I were particularly concerned about him, seeing each other as our principle rival.  In the end, A won with 13 points!  That's him in the blue on the lower left.  I think I had 10 and Perry had 7 or 8.  J was astounded that he had won, but happily concluded that she would finally have some worthy competition from him!  (She first beat her mom and I when she was about 7, in only her second or third game - and has continued to win fairly regularly since then!) 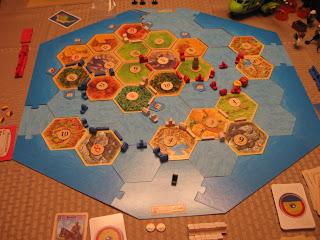