We got three games of CY6! in Saturday evening.  No, we didn't play long.  The games were just that short!  We played two games of a scenario I had read about somewhere (can't find the reference now) of two Me-262s attacking a lone B-17 protected by four P-51s.  In both games with the B-17, the Me-262s attacked as a pair head on and blew the B-17 out of the sky in a single pass.  They never rolled less than the 31+ column for damage.  Those four 30mm cannon are a lethal combination.  In both games, I flew the bomber, while Perry and Doug split the P-51s and Steve flew the Me-262s. 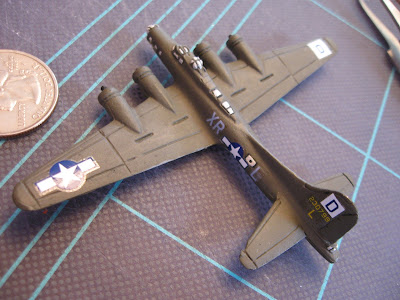 The B-17 decaled up with the bling offered by Scale Specialties.﻿ 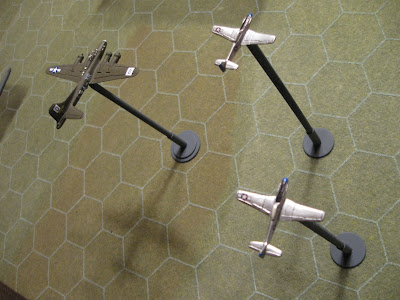 And in flight over Germany with some little friends for support﻿ 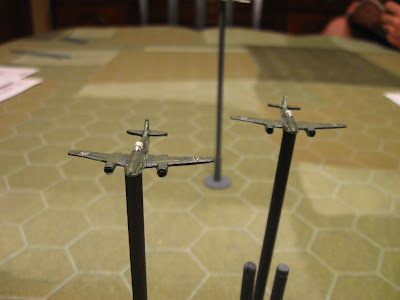 The third game we played was the Heinz Baer scenario from the rulebook, pitting four P-47s against a single Me-262.  Here Steve continued with the Me-262 while Perry and Doug split the P-47s.  I sat this one out and just refereed. 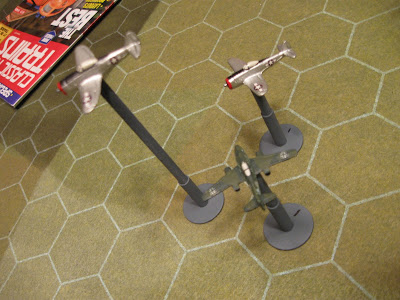 Steve's masterful handling of the Me-262 led to first blood when he got a point
blank shot and dropped one of the Thuds. 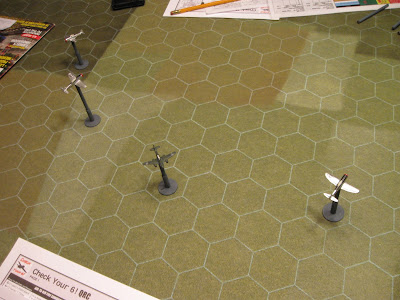 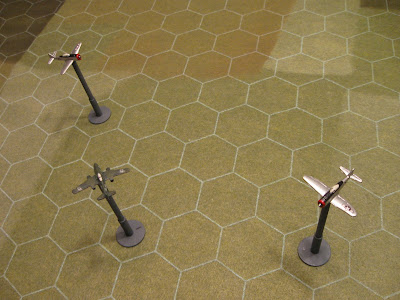 The second Thunderbolt to go down... 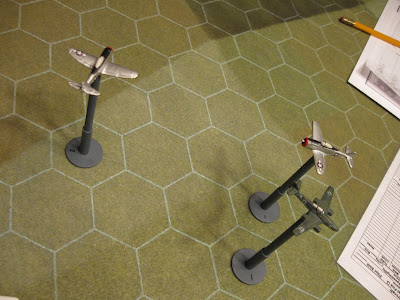 A close pass.  It wasn't long after this the third Thunderbolt hit the dirt and the
lone survivor ran for home.
Steve's masterful handling of the Me-262 faithfully recreated the real life outcome in which Baer took down three of the P-47s while taking no damage himself.  The Thuds got a couple of shots off, but had no effect.  This also saw the inauguration of my home made flight stands.  It's a 1" length of plastic tube glued to a washer, with 1/4" doweling in 1" increments for the rods.  My fighters all have a nail head glued into the underside so I have a magnet on each rod to hold the plane.  The bombers are too big to be held by a magnet, so they have a 1/8" hole drilled in the bottom and I used a pencil sharpener to whittle down a set of dowels enough to fit into the hole and hold the plane up.  Worked like a charm, but some of the dowels are a little snug in the tube and the glue is a bit fragile.  We only had one catastrophe for the night, which wasn't bad.  Heck, I snapped one off just fitting the dowels in it!  ﻿
﻿
﻿
Posted by Sundance at 2:17 PM