We played the Battle of Hubbardton last night using the 1776 rules.  They are an old set, but we like the feel of them.  I've had the figs for this for a LONG time but we just got around to playing it finally.  Doug and I were the Americans, while Perry and Steve were the British.  The British entered down the military road from Ticonderoga with the light infantry in the van to find the American picket blocking the saddle. 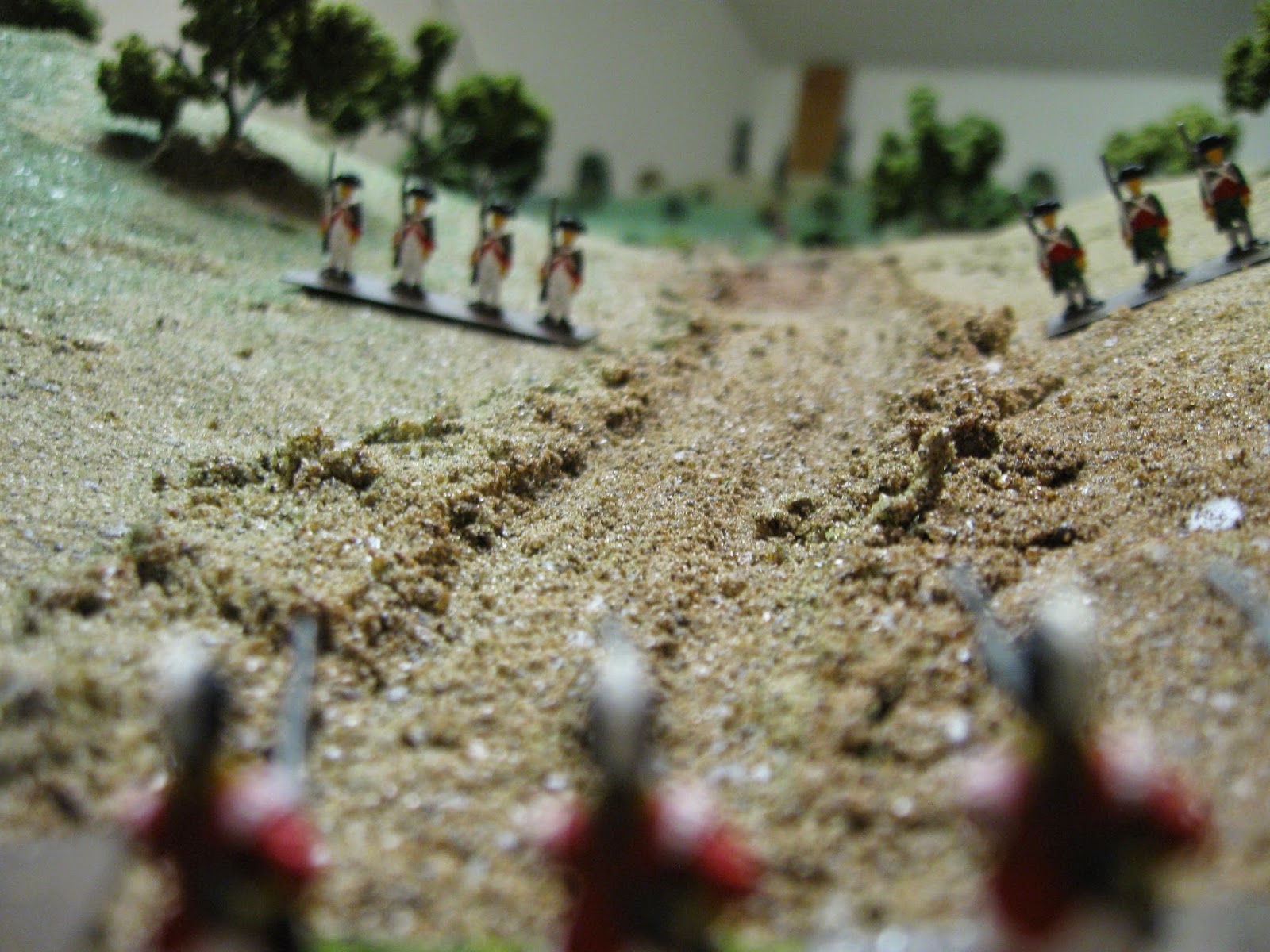 
The main body of the Americans, holding the fence in the field. Unlike the real battle, the fight never got to the field in our game. 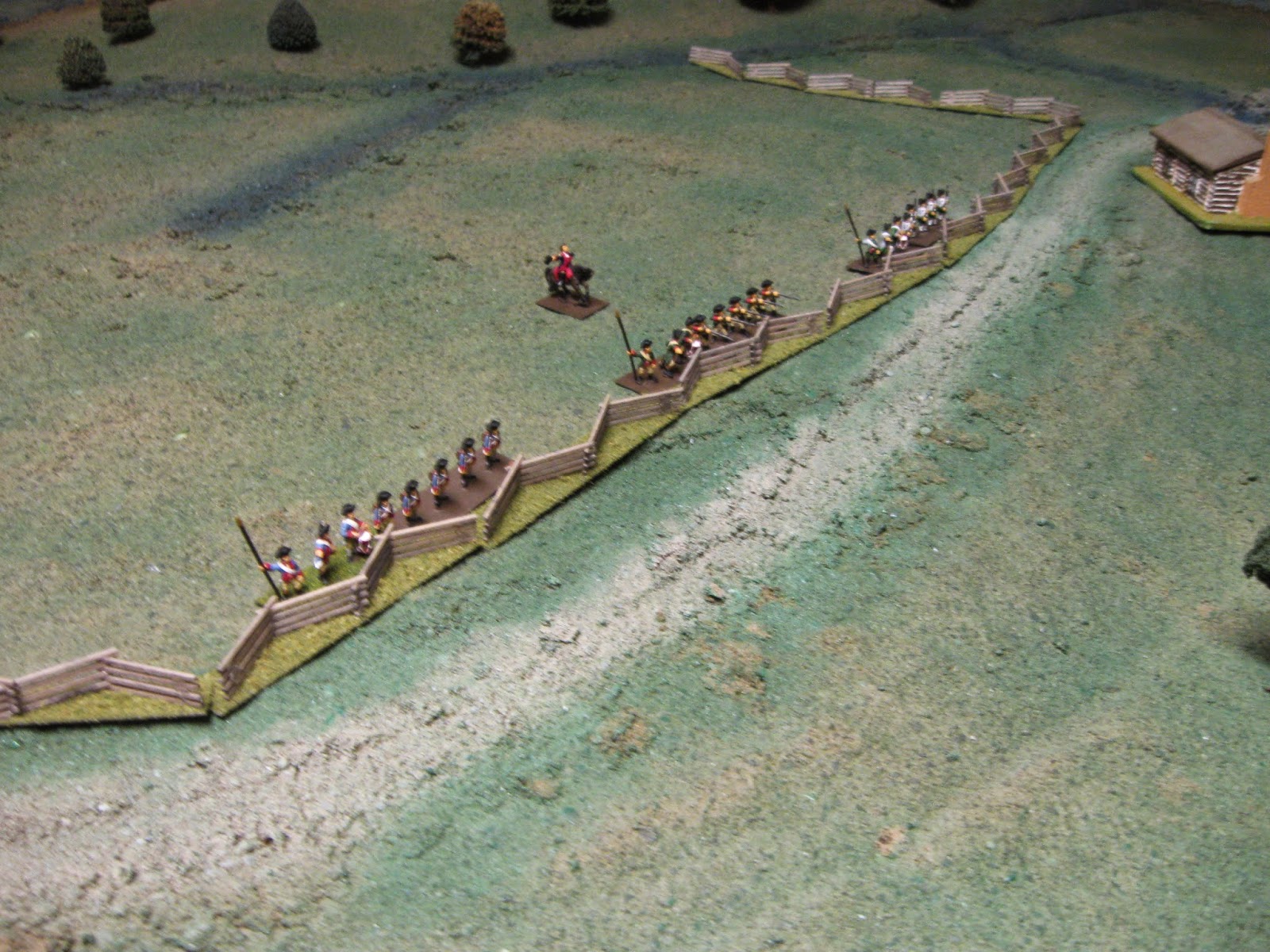 The full British force marching through the saddle after pushing the picket back.  The light infantry are deployed for skirmishing in the lead﻿ 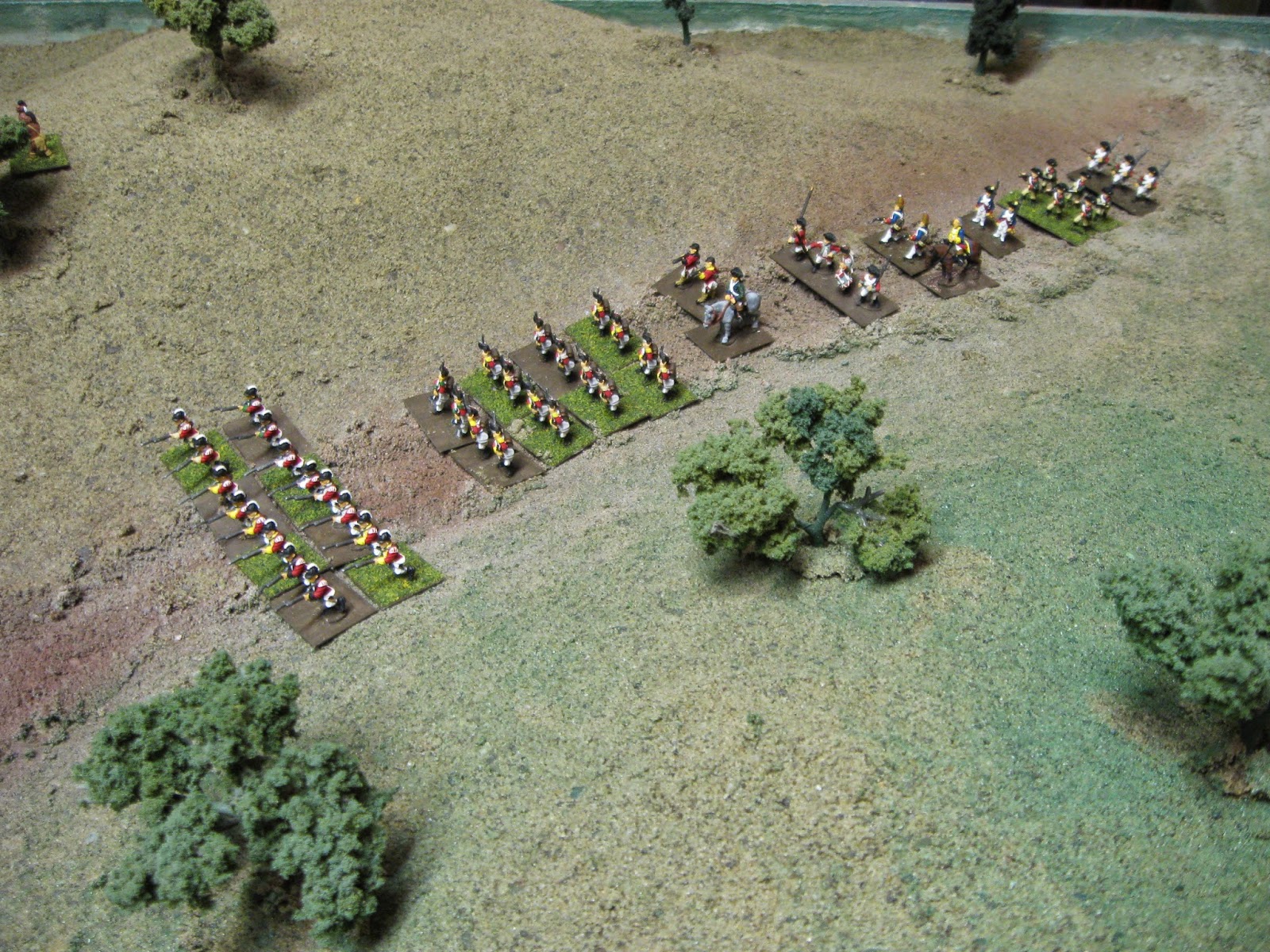 The supporting companies move up to block the British advance, but are chewed up by the British machine in turn!  Here, the light infantry have turned off into the woods and formed a skirmish line (the end of their line is at top center of the picture, just above the grenadiers), while the grenadiers are formed to attack against the scattered Americans.﻿ 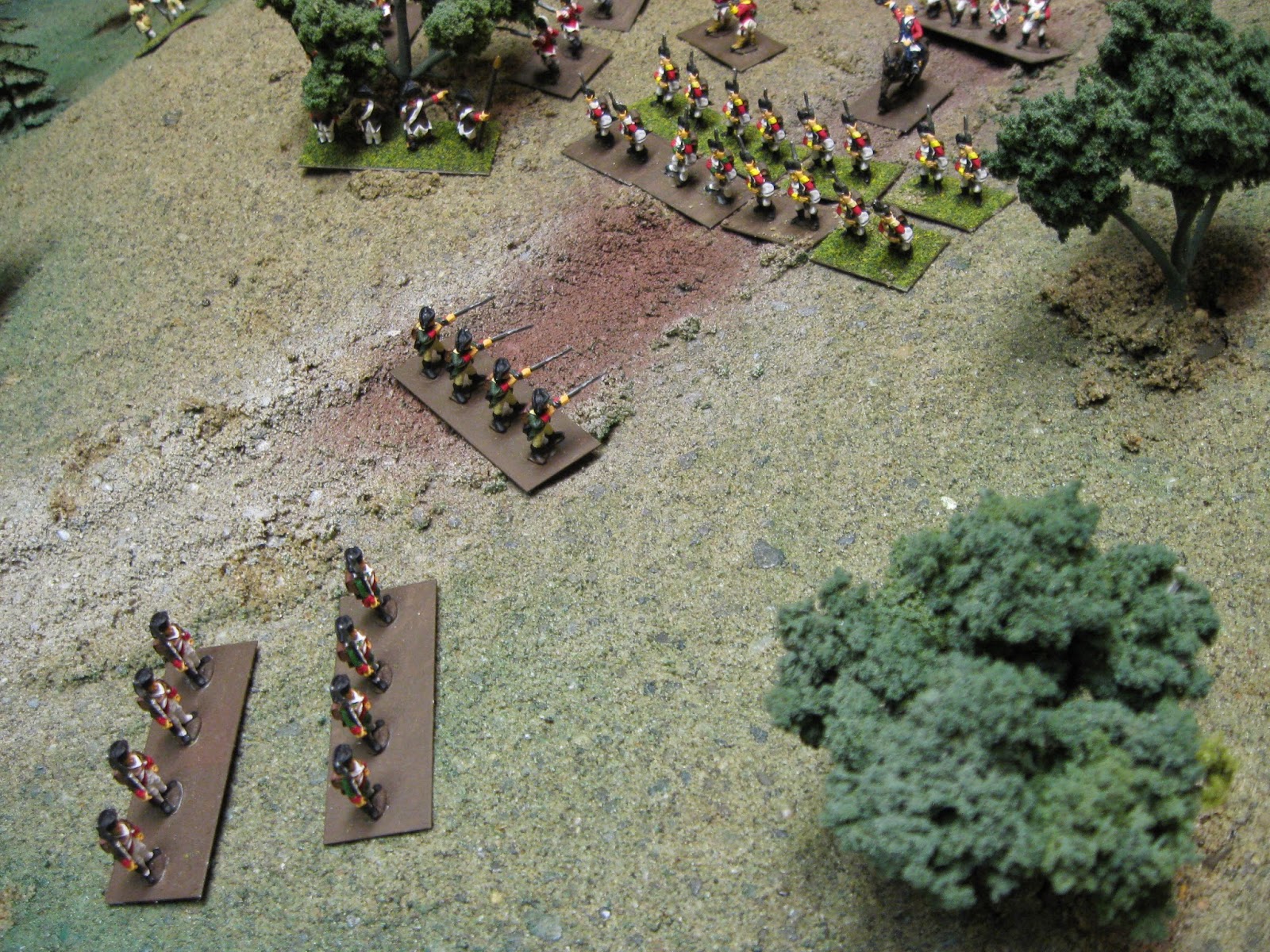 Here is the light infantry moving through the undergrowth with the formed grenadiers in the background.  In the foreground, the Indians are giving the American militia fits with their fast movement through the woods. 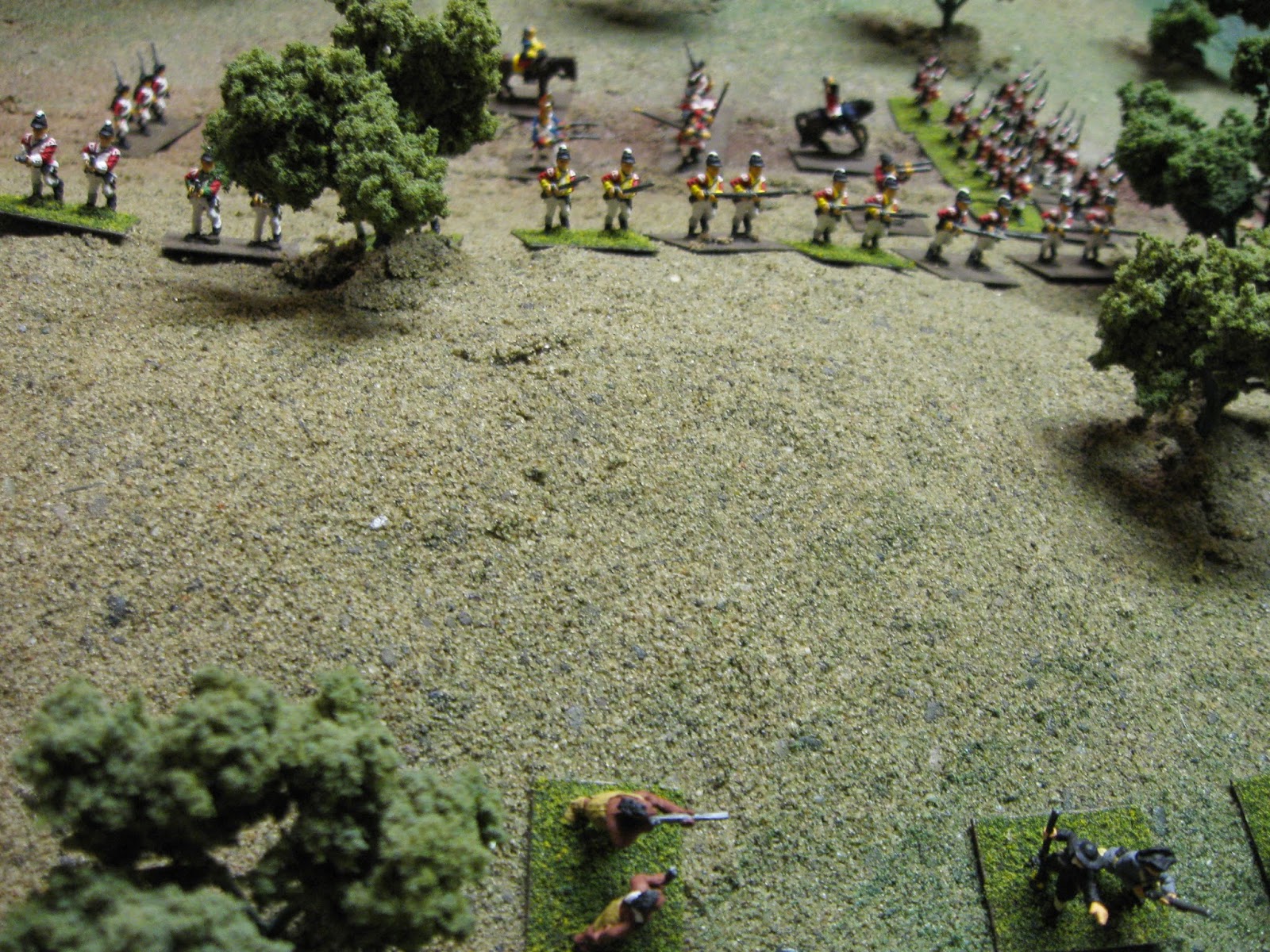 2nd New Hampshire managed to gather its scattered forces and line up to hold the brook. 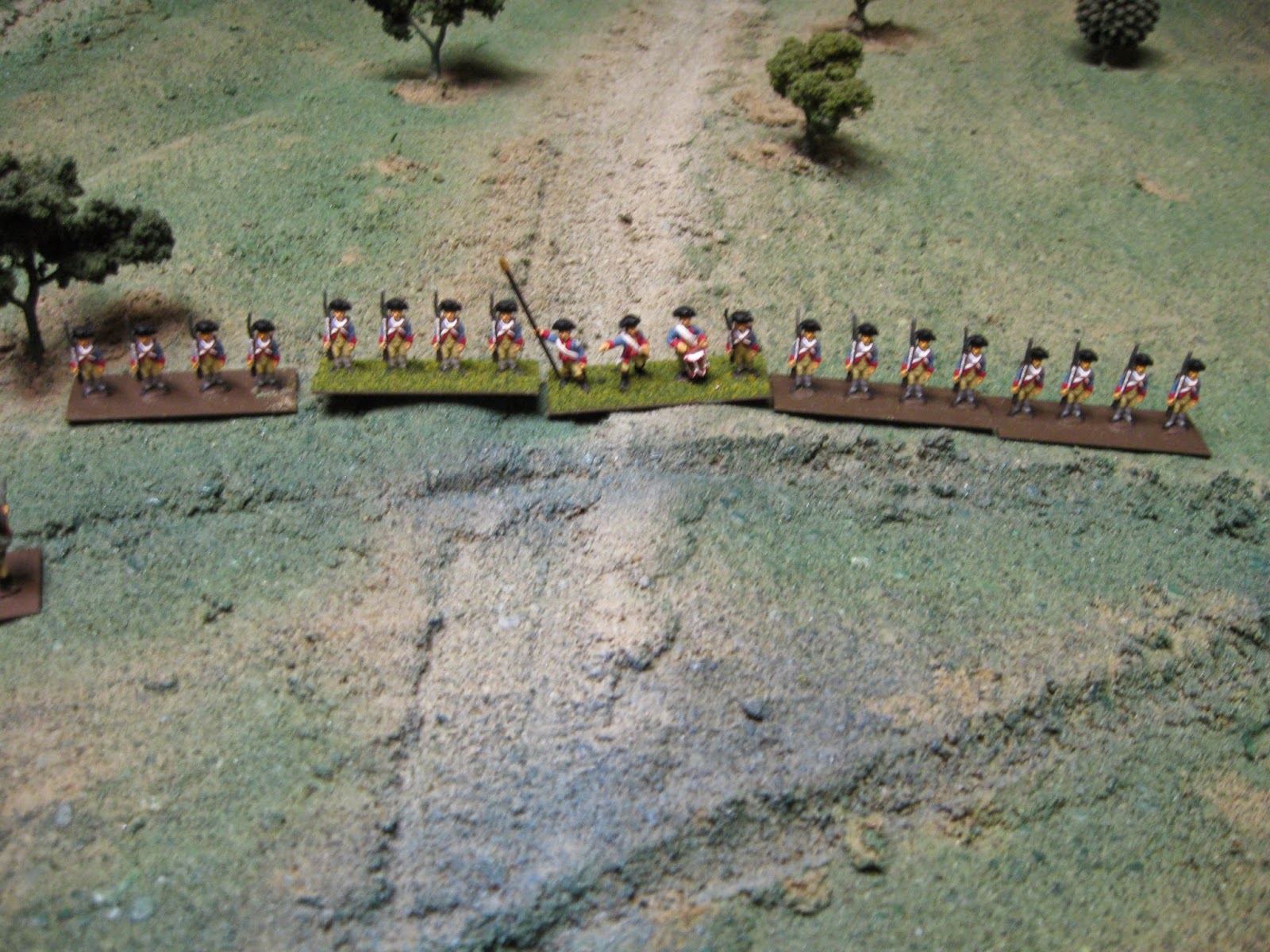 The light infantry moving down the hillside clearing the woods and pursuing the militia.  A couple of supporting companies were able to harry the light infantry's flank and killed a couple of figures, but the formed battalions of light infantry and grenadiers were pretty much unstoppable. 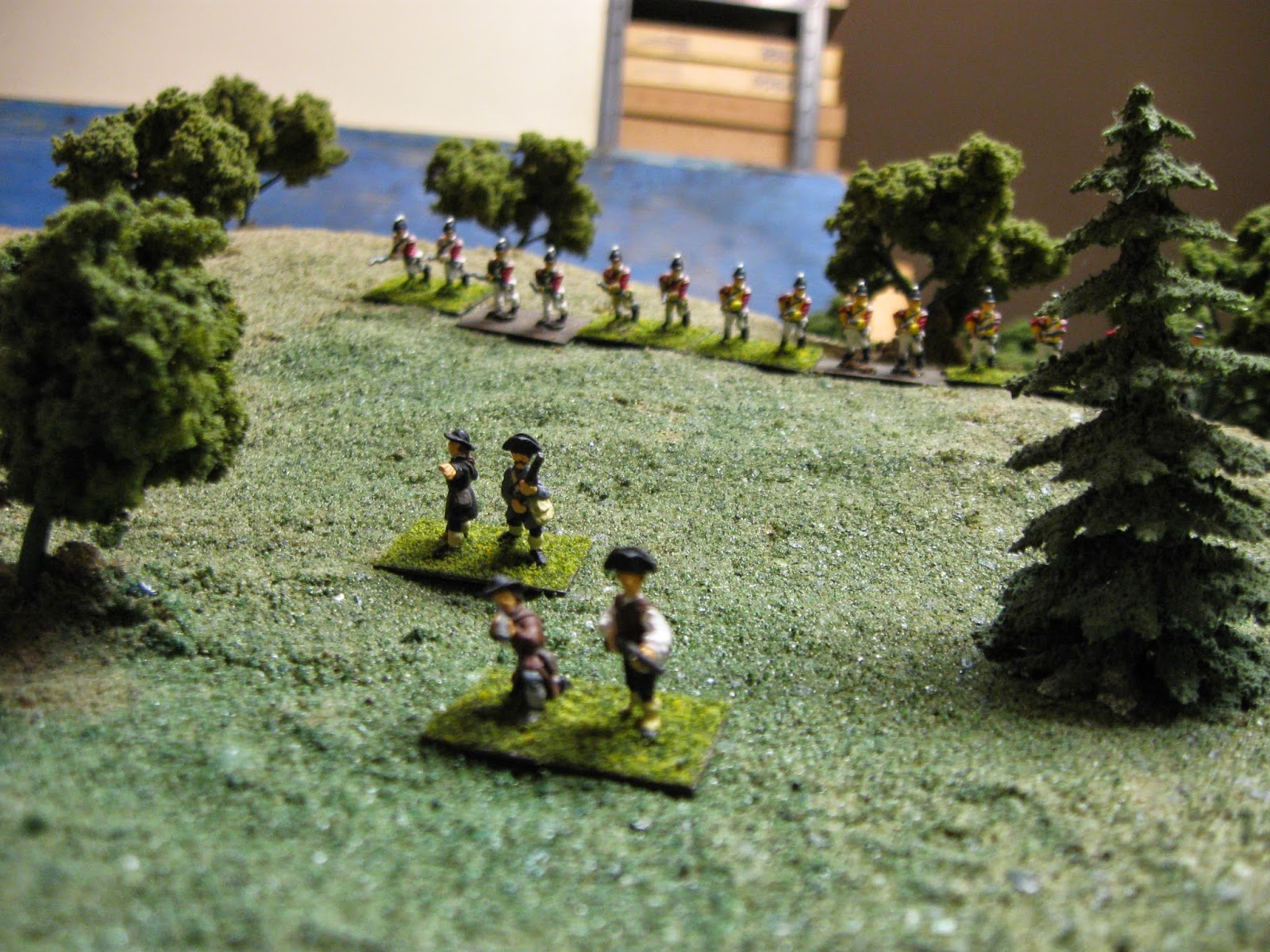 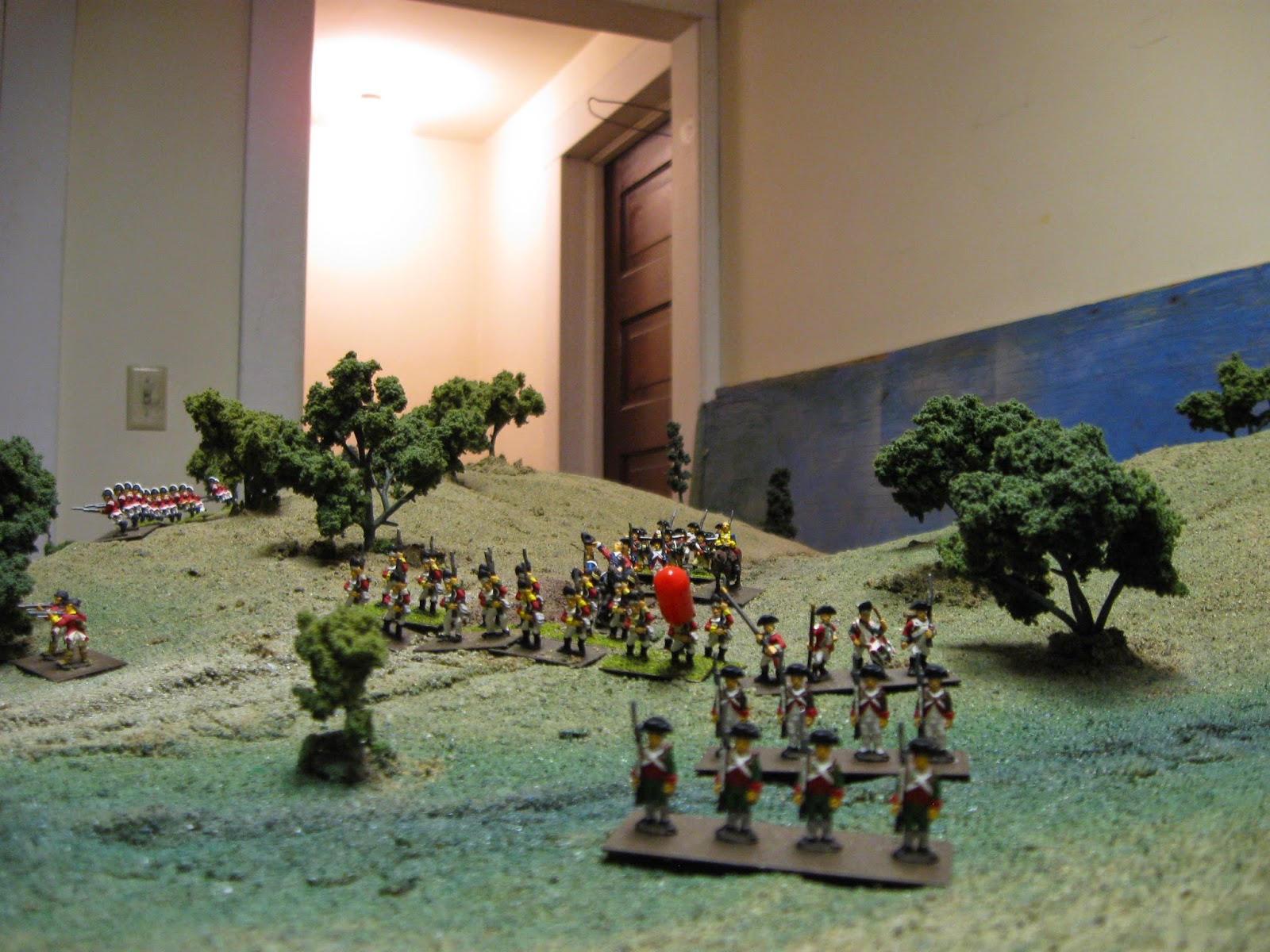 Steve and Perry masterfully handled the British and Hessians.  Here the British are just about fully in line: from top left, the light infantry, the Corps of Marksmen, the grenadiers with Simon Fraser and Peters' Corps right behind them, then come the Hessians with the jaegers at the brook, while the Hessian grenadiers and light infantry have crossed to pursue the retreating Americans, along with a detachment of the 24th Foot.﻿  The 2nd New Hampshire is lined up to receive them. 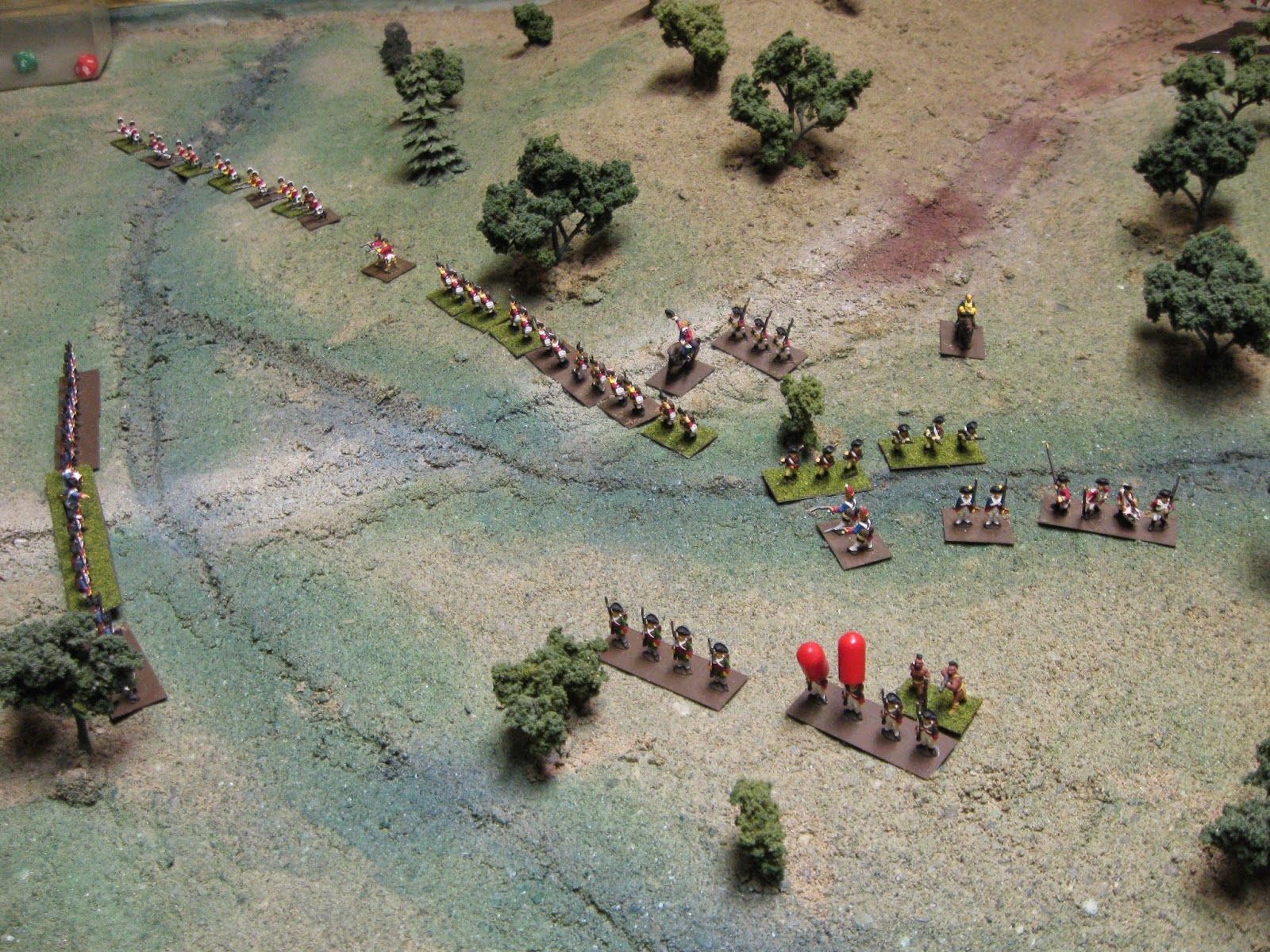 3rd New Hampshire is racing along behind the 2nd to try to hold its flank.  I didn't expect the light infantry to be on me so quickly and should have reinforced much sooner.  I could have wheeled the 2nd back, but it would have taken time and I would have been facing the full weight of both the light infantry and the grenadiers.  It's my own fault for waiting so long to reinforce the line. 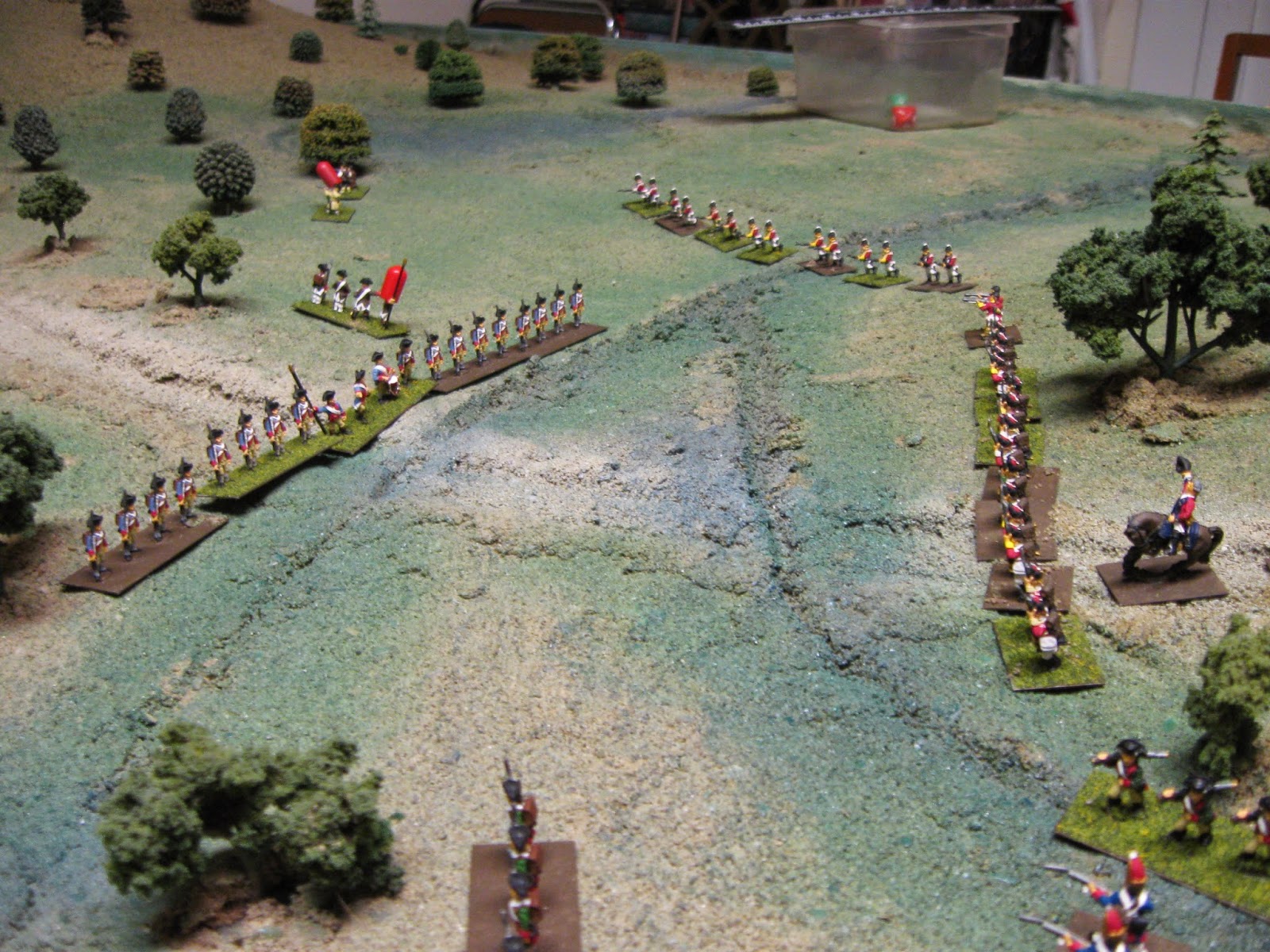 At this point we called the game.  Doug had to go and it was getting late.  It might have been different if I had moved up another regiment or two from the fence.  I think the picket and the supporting companies should have fallen back faster, rather than trying to stand toe-to-toe and giving ground slowly - basically, it might have worked if they had led the British into the field.  At any rate, it was a fun - if frustrating - game.  There were few casualties for the number of shots fired.  The vast majority of them were low percentage shots because of being in the woods and most of the units were in skirmish order.  Perry was in unusually fine form, however, single-handedly doing the most damage with a (for him) rare performance of dice handling.  He killed several figures and at one point the Americans had three units in rout, although at the end, two of them began to improve their morale.  All in all, though, a good time.  Unfortunately, at this point, I have to paint more figures to do any more Rev War battles.
Posted by Sundance at 8:25 AM