We did a fairly large ACW naval game today that I have been planning for a long time.  The basic set up is that the Union is blockading the mouth of a river and receive intelligence that Confederate naval forces are on the move, heading downstream towards them.  The Union forces assume they Confederates are trying to break out of the blockade, but in reality, the Southerners are coming to escort a couple of blockade runners into to the river.  The board was set up as a large ox-bow with a small fort and some individual gun positions watching the river.  The Union had the Kearsarge and two Itasca/Unadilla-class 90-day gunboats, along with a pair of mortar schooners and the river gun positions.  The Confederates started with the Morgan, Gaines, General Moore, Nansemond and Hampton coming down the river.  Rolling randomly, the Alabama, Banshee and A D Vance entered from the ocean side on turn 7 or 8.  By then, the Union ships and the Confederate river flotilla had joined action. 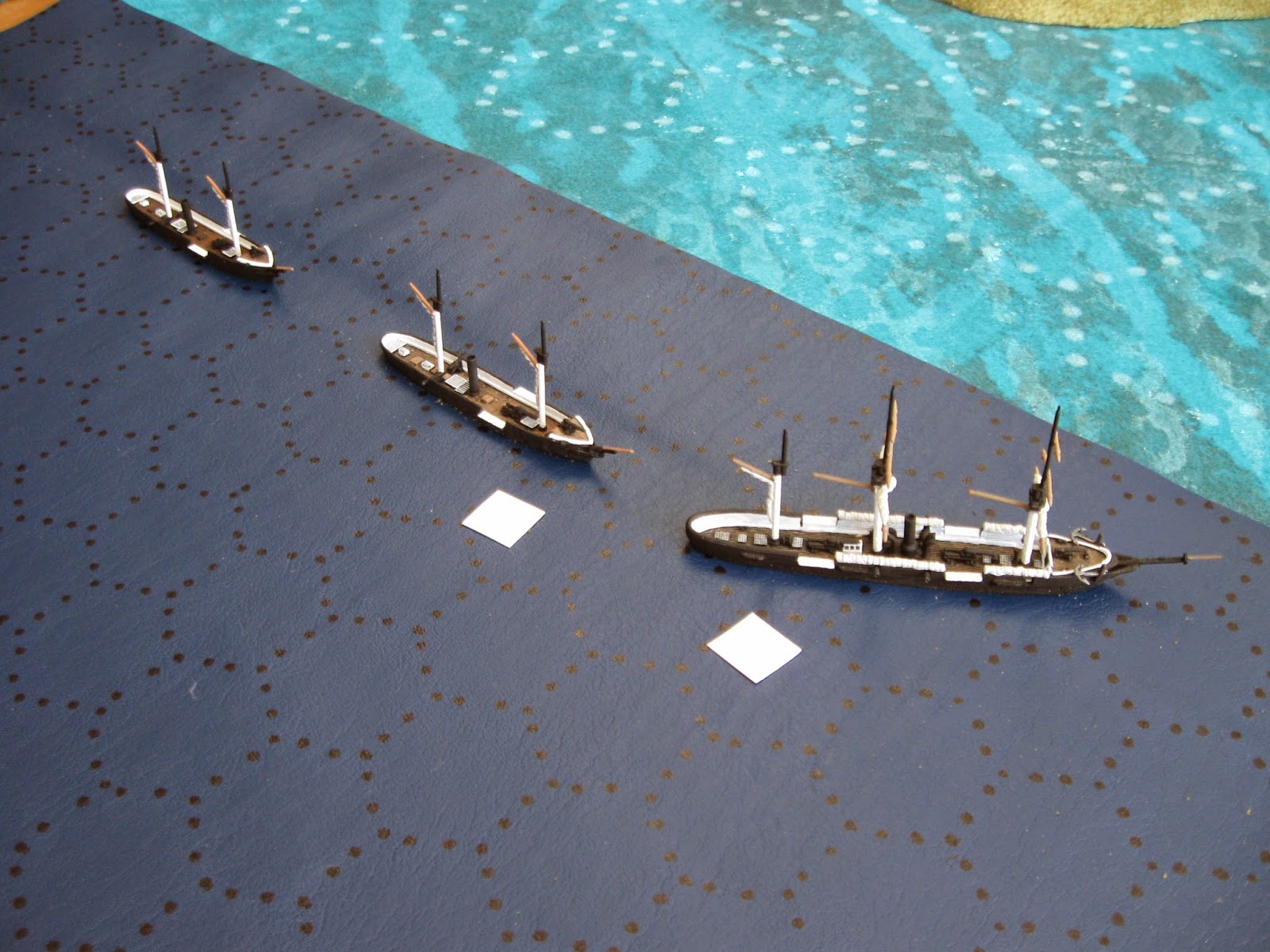 The Union patrol just off the coast. 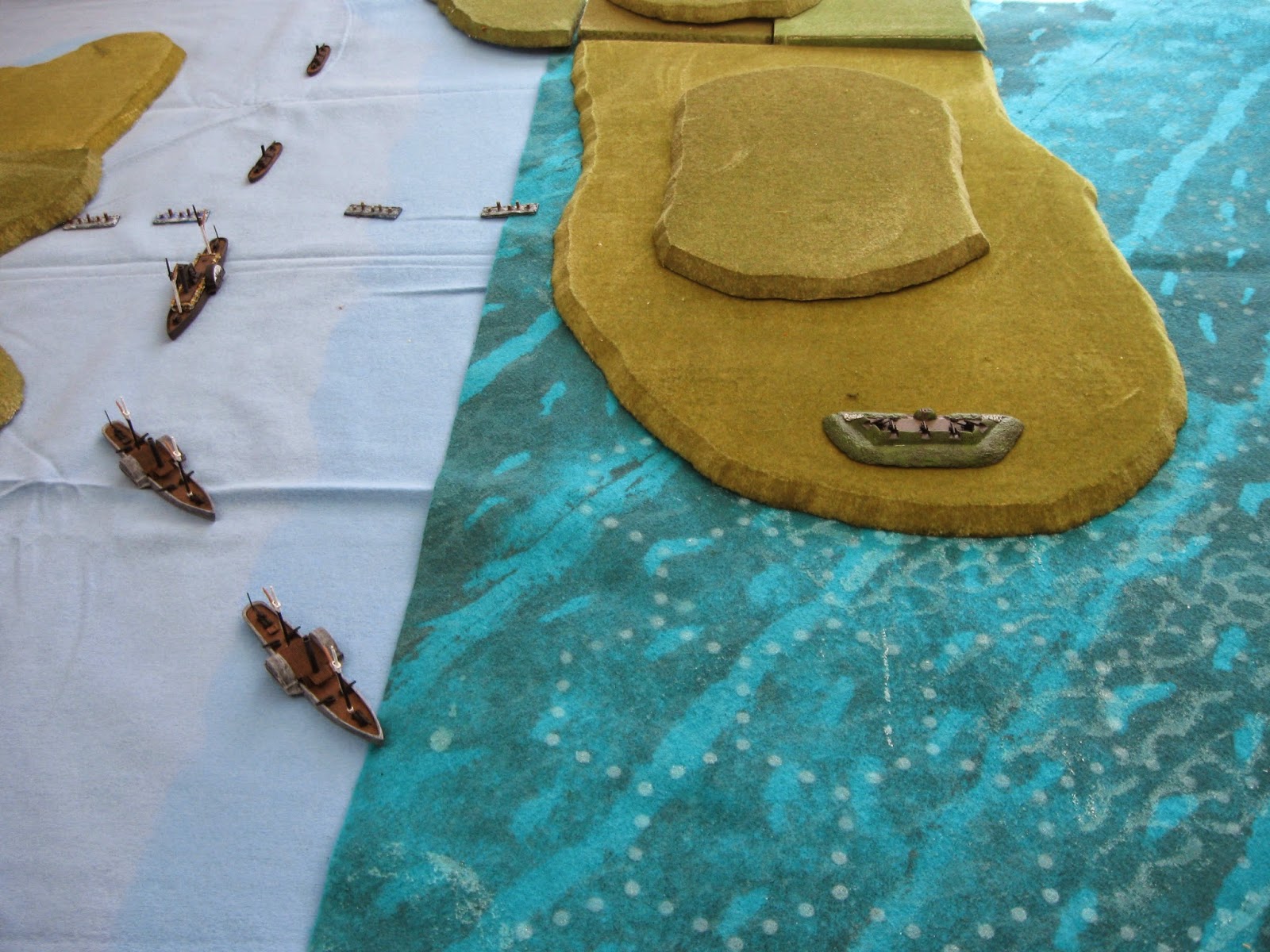 The Confederate battle line rounding the ox-bow, with a small Union
fort on the point. 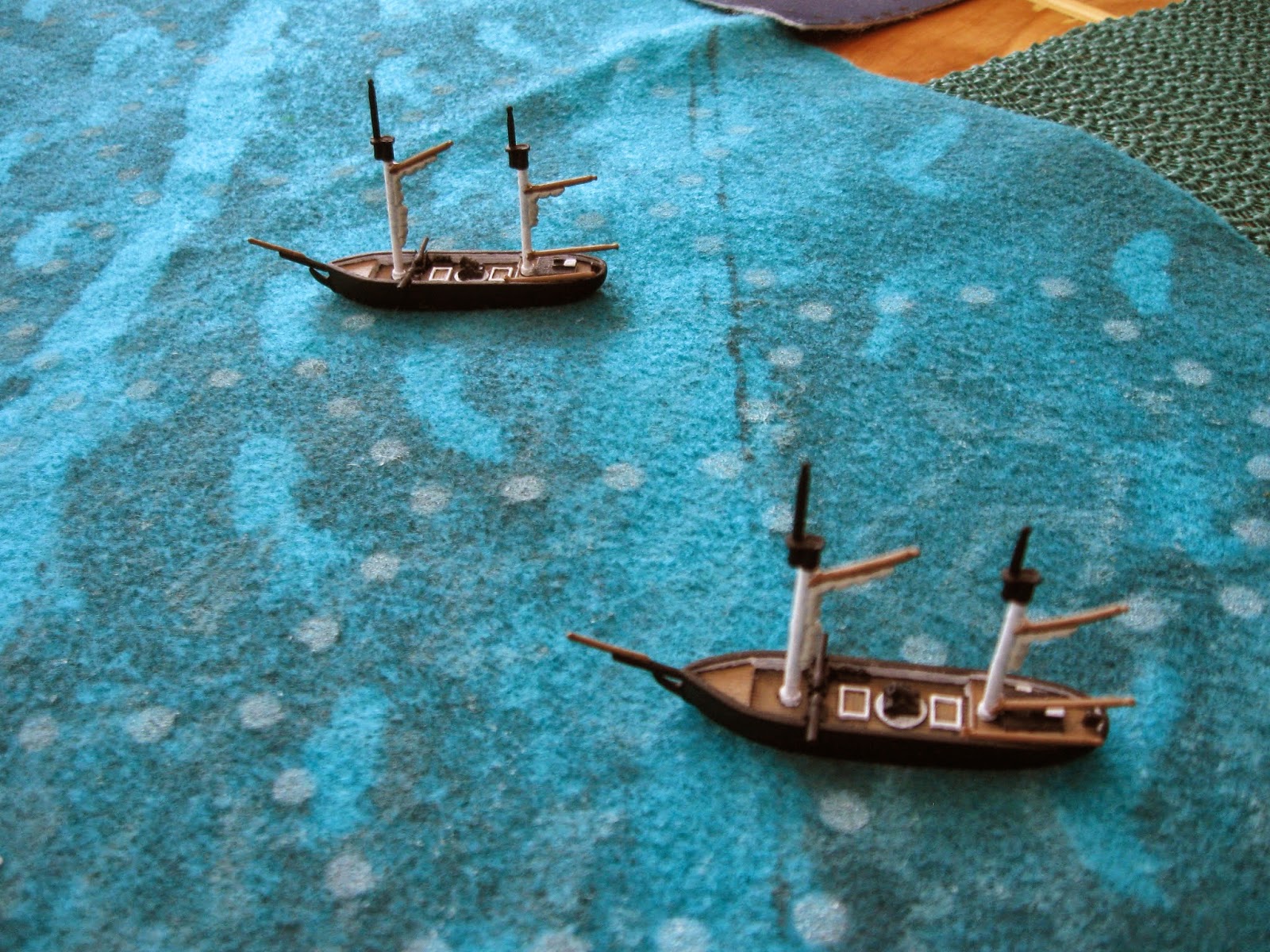 The Union mortar schooners, waiting for a target. 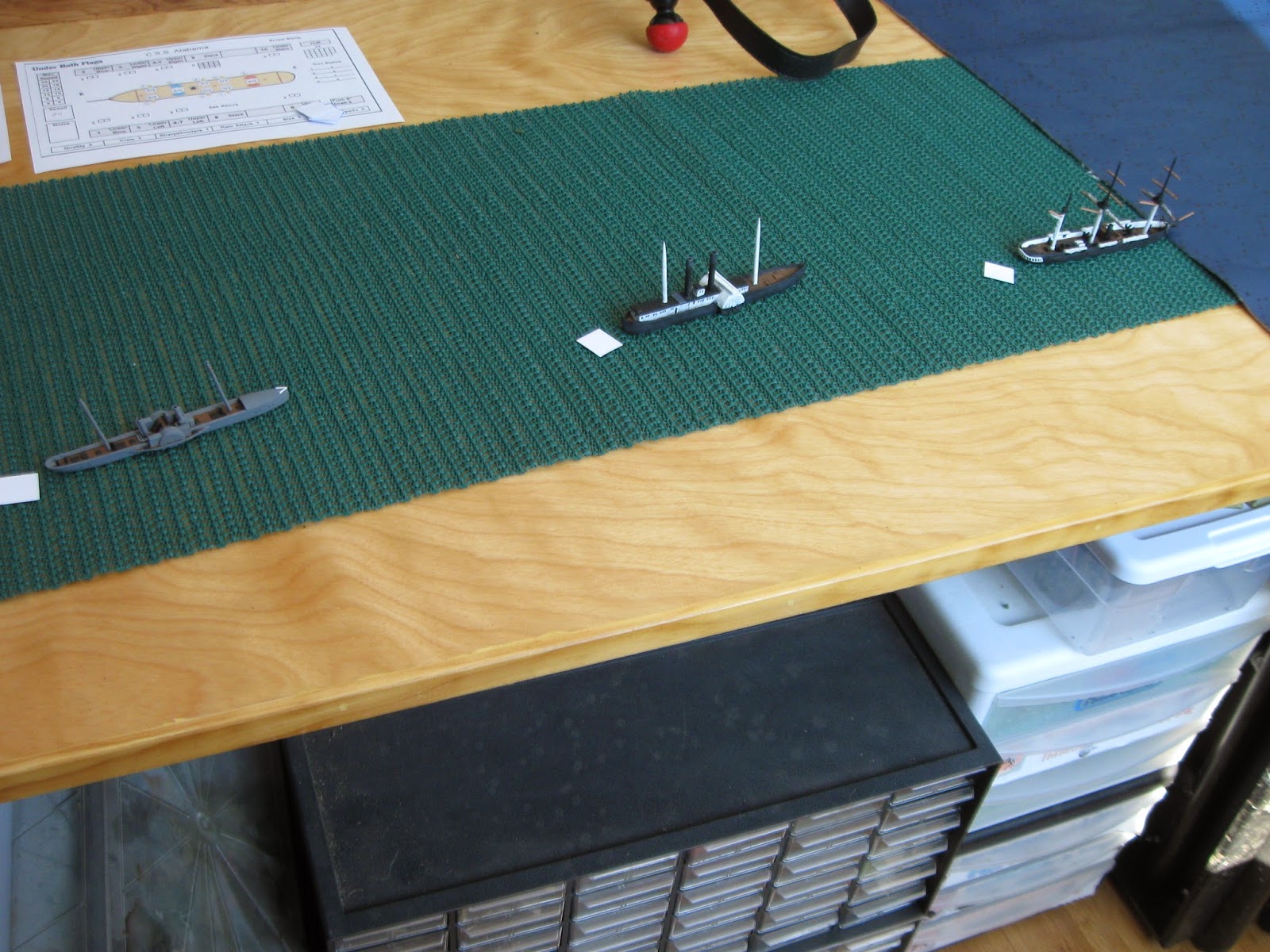 Alabama, A D Vance and Banshee (r. to l.) entering the battlefield.
The battle became such a swirling mess that at this point, I couldn't even recap the highlights!  Everyone was shooting everywhere.  It was a tough slog for the Union, though.  The Confederates had more ships, but there was an even number of guns and the Union had a slight edge in weight of shot.  The Confederates were pretty confident from the beginning, but did become rather concerned when these little guys popped up on the table - three torpedo boats and their tender, an armed tugboat.  ﻿ 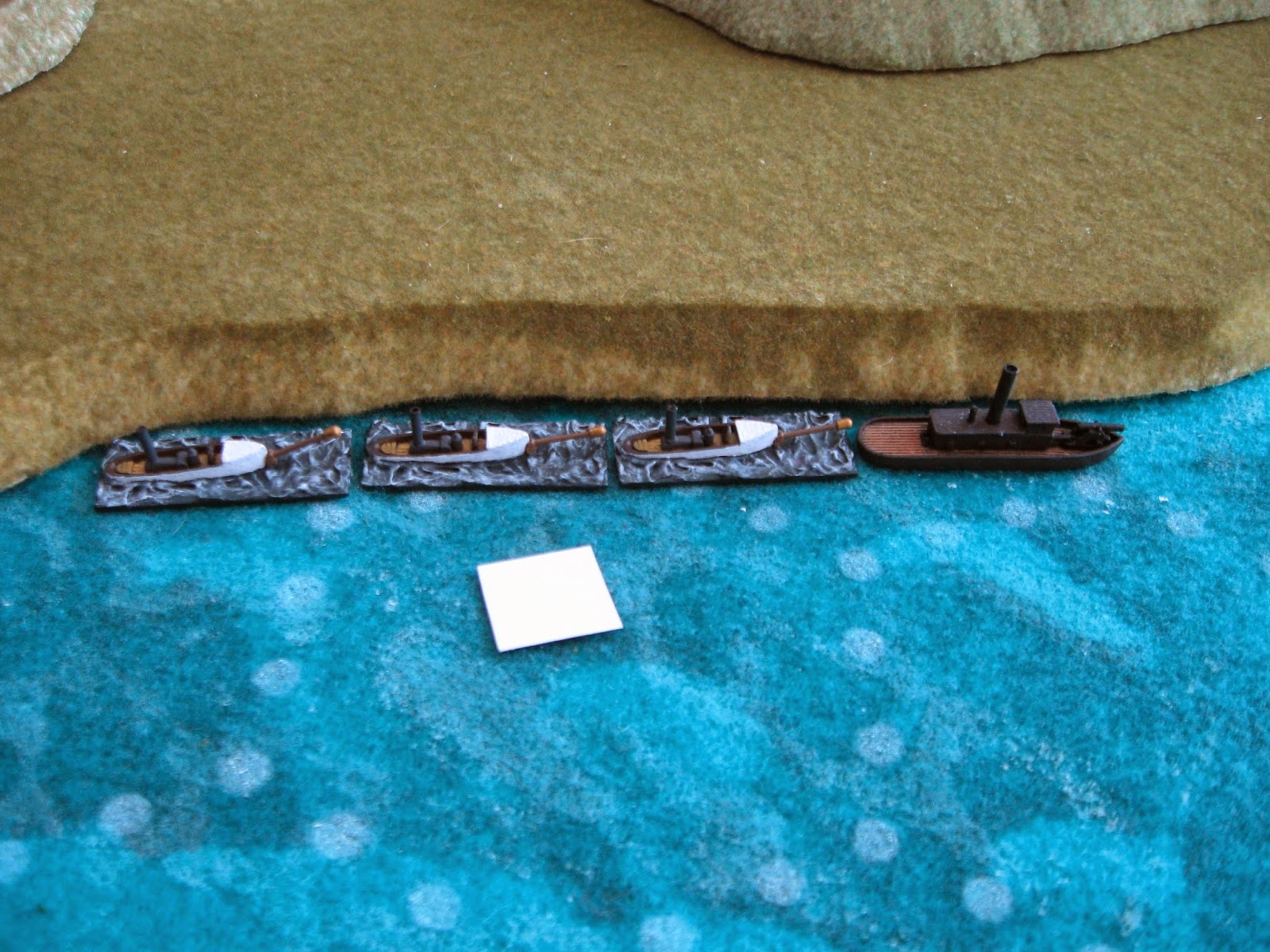 The shot of the game probably came when one of the mortar schooners dropped a 13" shell right down Alabama's stack, demolishing her stack, cutting her speed in half and enveloping her in smoke for the duration of the game.  The schooners hit General Moore at least once as well. 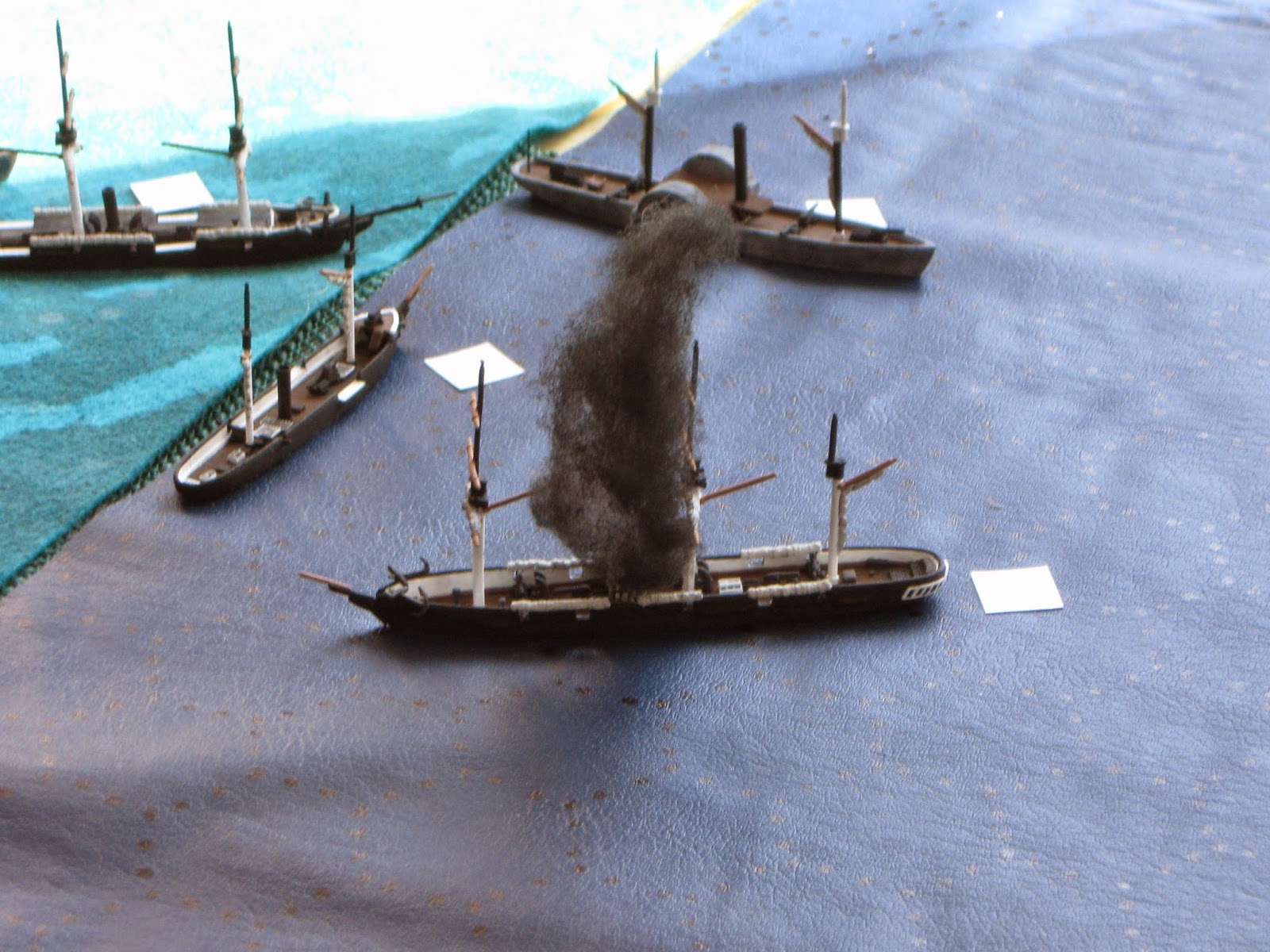 There was a lot of action and finally, towards the end of the game, ships started getting worn down to the point where damage was getting critical.  The Gaines was badly hit by the Kearsarge and the gunboats, to the point we thought it might sink or be forced to surrender from morale failure.  Neither happened.  The Nansemond surrendered to the armed tug a turn before the tug was sunk, and then was grounded on the shore.  One of the gunboats tried to cut off the General Moore, only to rammed and sunk. 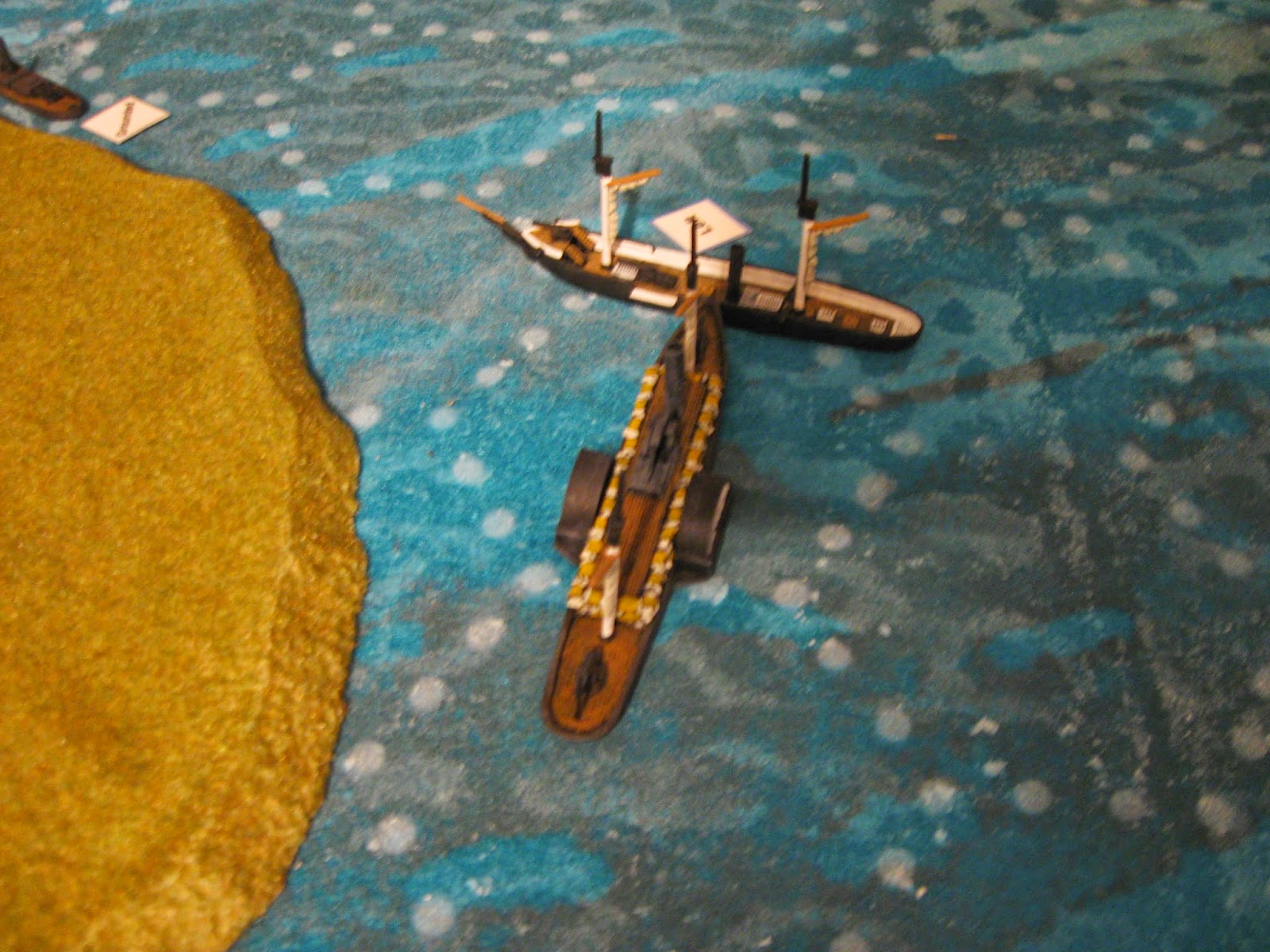 The torpedo boats were unfortunately ineffectual.  One was sunk by gunfire.  The second was rammed and sunk.  The third made two attacks, missing with the first and the second was ruled a dud.  The A D Vance and the Banshee made it to the river none the worse for wear - the Vance had minimal damage, while the Banshee was in danger of being sunk.  If only the Union gunners in the fort hadn't been celebrating their victory a little prematurely they might have been able to do a little more damage as the Banshee screamed past.  ﻿Here, the Vance (left - one of its masts was accidentally knocked off) and the Banshee race of the safety of the pilings.  Banshee won by a nose with the last Union shot chasing them around the bend.  The Confederates had done a number on the gun positions, as well.  Two of the individual positions had been destroyed, and the small fort and remaining gun position were damaged. 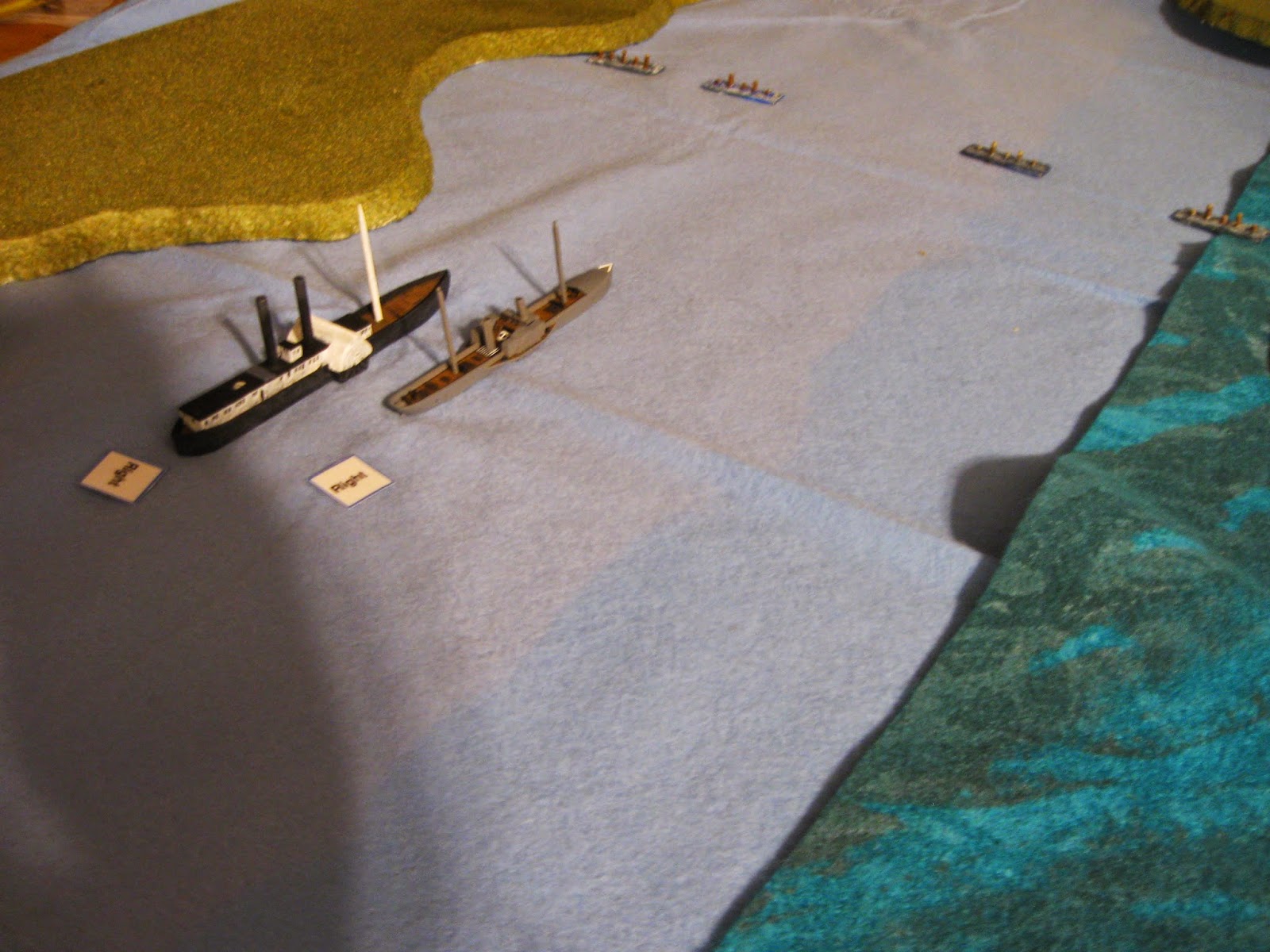 It was a fun - but LONG - fight.  Turned out to be about 8 hours of gaming or so.  I have two more ACW naval battles planned - neither as involved as this one, though hopefully as fun.  All of the models are from Thoroughbred except for the A D Vance, which is from Peter Pig.  We used Bay Area Yard's Under Both Flags rules, which, despite its flaws, we still find to be one of the most playable sets we've tried.
﻿
﻿
﻿
﻿
Posted by Sundance at 8:09 PM