I bought X-Wing a few months ago and it's been sitting in my dining room awaiting an opportunity to play.  I brought it with me, along with the Millennium Falcon, when I visited my kids in Idaho, knowing that my son at least would like the game.  We played our first game on Friday.  Actually we played our first four or five games on Friday.  The first game was a standard two Tie fighters versus the X-Wing.  I gave the two Ties to my son thinking that it would give him a bit of an advantage.  It was a very close game, but I ended up winning that one although the X-Wing was down to 1 or 2 damage points remaining. 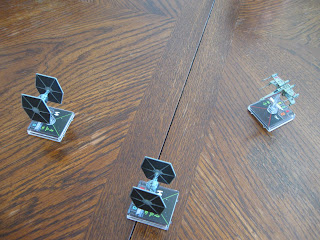 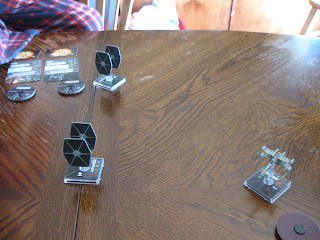 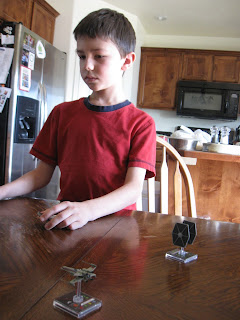 The master plotting his move. 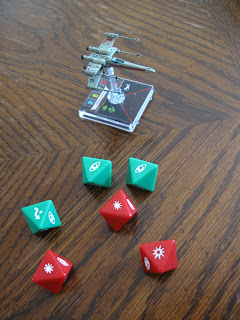 The final dice roll.
The second game was the Millennium Falcon against the two Ties.  This time, the boy was the Falcon and I had the Ties.  The Falcon was down to just a couple of damage points remaining when he blasted my second Tie.  ﻿ 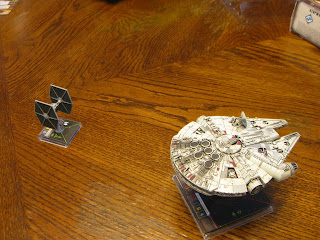 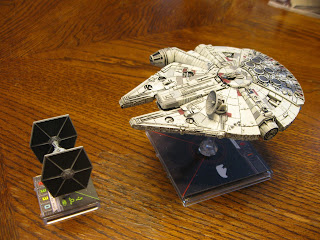 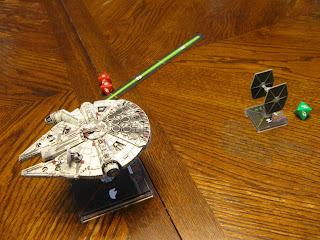 The third game, I think, he insisted on playing with two Ties against an X-Wing and a Y-Wing with some asteroids scattered around.  I warned him that it was unbalanced in favor of the Rebel players, but he wanted to do it anyway.  In the end, I think the Y-Wing had lost a couple of shields and maybe a point or two of damage when the second Tie bit the dust. 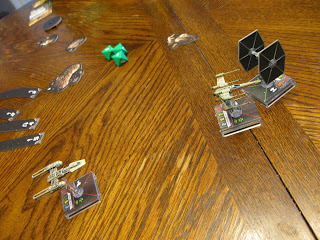 Felt like we were playing the game all day.  It was a lot of fun, though.  We tried the advanced rules but they didn't really stick with him so we didn't really get the full effect.
He got sidetracked part-way through playing by the Nerf guns that I had sent earlier in the week so we could chase each other around the house when cabin fever set in.  We spent a lot of time having Nerf wars in addition to X-Wing.  Productive weekend, all-in-all.
﻿
﻿
﻿
﻿
﻿
Posted by Sundance at 3:05 PM