We usually try to set New Year's Eve/Day aside to hang out and play games with the kids.  While they were watching a movie, I got one of my favorite games out and reread the rules, then cut up some cheese and sausage to have with crackers while playing.  I got a Dubliner, a mild Gruyere and a Gouda, along with some summer sausage and a mild salami (the girl doesn't like strong flavors - in the end, she didn't like the cheeses except for the Gouda).  I really liked the Dubliner and the Gruyere - can't remember having had them before, surprisingly.  The Gruyere, if I recall correctly, had a very milky flavor, while the Dubliner was more of a buttery flavor.  Both were hard cheeses, which was a nice contrast to what we usually have around the house.

Anyway, enough of that.  I haven't played Formula De for at least thirteen years, but figured the boy was finally old enough to give it a shot and I've had a hankering to play it for a while now.  We used Zandvoort No. 1 from the Netherlands. 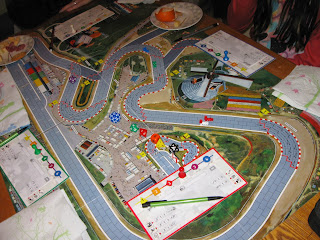 In the picture above you can see me in the red car and mom in the white car with the red fin running neck and neck on the straightaway in the middle of the photo, with two turns to go before the long straightaway to the finish line.  Unfortunately, for the girlie, mom caught on pretty quickly and the boy got some expert advice from dad after struggling through most of the game, so she ended up in last place while dad won the first race.  The boy gets the concept of the gears, but not enough to plan what gear he should be in a turn or two in advance to safely corner so he tends to get some amusing results when moving.

This morning, I was trying to get some job applications done so mom played a game on Zandvoort No. 1 again with the kids.  Julia showed what she was made of, beating mom and her brother.  The boy still wasn't done, though.  We played another game (minus J who was raced out by that point) on Monaco.  I won again, but mom stalled at the start and so was basically a turn behind the whole game anyway, while Adam had some trouble negotiating the curves. 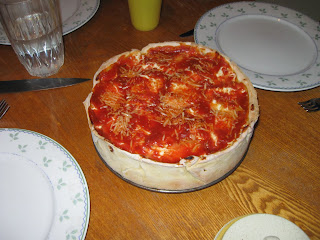 I think this was the best one I've ever made. 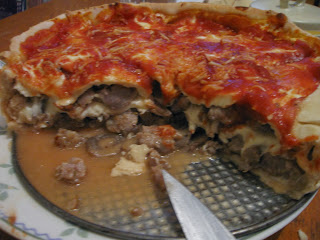