Snap Shot: a Blast from the Past

Last week the boy asked if we could play a game.  "Sure," I said, "what do you want to play?"  He goes up to my room and brings down Snap Shot.  I tried to explain to him that it's a pretty complex game for a 7-year-old, but he would not be deterred.  So through the week we set up the characters and the animals (we played the introductory scenario, where the animals escape from their cages on the scout ship).  This morning, we finally had time to play it.  He decided he wanted to be the animals, so I was the four crewmen.  Since their starting positions are set by the scenario, there really wasn't a lot of choices to make, but I did make sure that the three crew with heavier weapons were in the forward part of the ship, while the guy who only had the snub pistol was in the drive room, since he was likely to either be attacked first, or get locked in the drive room when the iris valves were shut from the bridge. 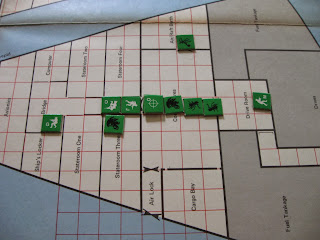 The boy didn't have a bad strategy and I was able to lock one animal in a stateroom, although they had full control of the Common Area.  One also got trapped in the Air/Raft Berth by the closing of the iris valves.  Once my crew had weapons, I opened the stateroom to work on taking out the beast in there only to realize that I was too close to effectively hit him with the weapon that I had.  Same thing happened when I opened the iris to the Common Area and started fighting the animals in there. 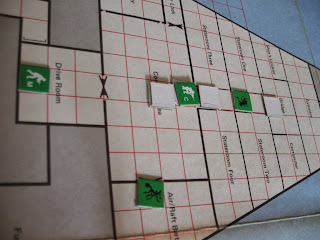 A little later in the game, you can see the guy in the Drive Room and the beastie in the Air/Raft Berth are still whole, while there has been a lot of action in the corridor between the staterooms and into the Common Area.  The counters that are upside down show the unconscious animals and crew members.  I think, crewman C had escaped the corridor and closed the iris valve, unfortunately sacrificing one of the two crewmen in the corridor. 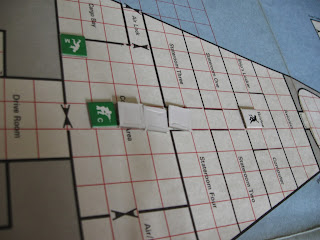 In the end, I had one crewman dead, one unconscious, one wounded and one unwounded, while he had two animals dead outright and four unconscious, which I was able to finish off at my leisure.  It was a fun little game and the boy enjoyed it.  His first question after the game was, "Now can we play Traveller?"  I am afraid that will have to wait for another day, but I'm thinking of ways to cut it down to a 7- and 10-year-old's level so the kids will enjoy it and want to play it over time, growing with the game so to speak.  I'm sure he will keep bugging me about it until we do play it.
Posted by Sundance at 7:23 PM