Had a small battle with an unusual force three or four weeks ago.  Here's the set-up:

Two HMPS trawlers (His Majesty's Patrol Service - made up of fishing trawlers converted for M/S and A/S work) are anchored on opposite sides of a narrow inlet in a fjord, when they are surprised by a Ju-52 fly across the inlet - almost directly on the line between the two trawlers.  In the few seconds they have, they open fire with their Lewis guns and are quite surprised to see the Ju-52 begin to smoke as it clears the second mountain range and disappears from sight.  They think nothing more of this, aside from gloating that it was their fire that hit the plane, but a short time later, a Norwegian fishing trawler sails up, hails the boats and announces that they saw a German transport crash and asks if the Brits would you like to investigate the wreckage.  The HMPS sends six armed men (five with rifles and one with a Lewis gun) from each trawler, all under the command of a lieutenant, on the Norwegian boat and it takes them to the site of the crash (on an island in the fjord), where they hope to capture the pilots, if they survived.  It chugs up to the shoreline near the plane, which, aside from having skidded some distance on its belly, appears to be amazingly intact. 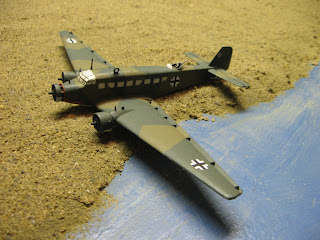 As they begin to disembark, all seems eerily quiet around the plane and they are disappointed, believing that the pilots must have died in the crash.  (This was a real event - described as closely as I can recall it.) 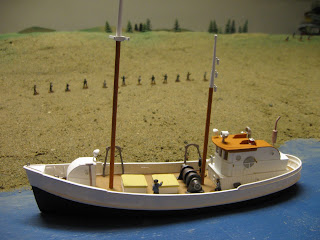 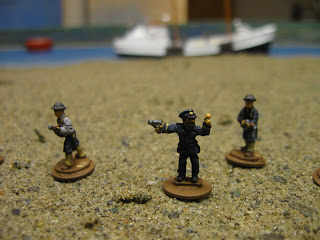 As the HMPS men get halfway up the beach, they see German heads disappearing from sight over the crest above them and begin firing. 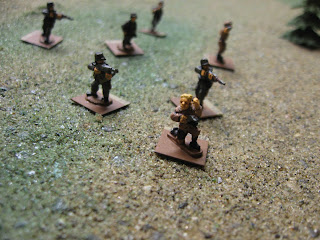 The Germans return fire with gusto and the British sailors, stalwart though they are, find themselves stonewalled, and eventually, they begin to get Out of the Fight results at an alarming rate as the firepower of the MG34 begins to tell. 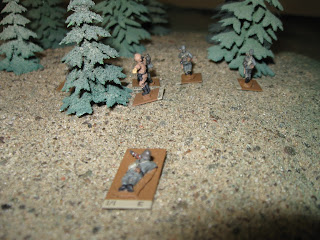 As it is the British are outnumbered 3 to 2, but since the Germans completely misread the situation and set up two-thirds of their force on the plateau above, and only one-third on the crest, it looked like the sailors might have a chance.  Unfortunately, in the end, the British are almost wiped out to a man advancing towards the crest and trying to take down the German half-squad that they can see, while the Germans only lose most of the men on the crest.  The Germans had two more half-squads, plus the three aircrew (one of whom was wounded) from the Ju.

That's pretty much what happened in the real battle as well.  All of the sailors were captured or killed, except for two who jumped back onto the Norwegian trawler as it pulled away from the shore just after the fighting started.

In the pictures above, you might notice a couple of Germans in light brown coveralls - those are Peter Pig German aircrew.  The British Lieutenant, highlighted in the picture below the trawler, is a repurposed Peter Pig U-Boat officer.  The HMPS sailors are Eureka Early War US Marines.  I cut the American canteens off their heinies, but otherwise painted them up as is and they worked wonderfully as sailors in civilian clothes (the 'uniform' of the HMPS) and enough kit to get themselves in trouble with.  The Tante Ju is from Armaments in Miniature and the trawler is an HO scale resin model.
Posted by Sundance at 7:55 PM