So, as you know, I've been a couple of weeks late in reporting my gaming.  Something that I have finally been able to remedy this week.  First of all, here is the reason that I was unable to report at least one of the games earlier: 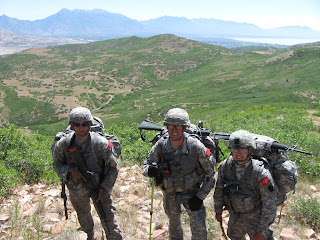 This is me (in the BCGs) and two of my guys on top of the 'hill' that took us two and a half hours to climb.  This was when we were about to descend it after a 28-hour mission (that unbeknownst to us was about to turn into a 36-hour mission and which followed a 24-hour mission with a 2 hour 'break' in between) - thus the joyful looks on our faces.

I do have to admit that we at least had some nice scenery to enjoy while feeling like a rewarmed pile of miserable doggie doo-doo. 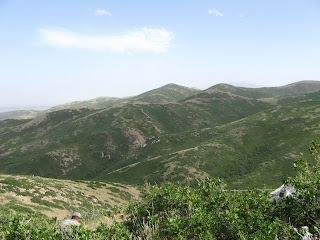 And the week did start with a 20-minute 'insertion' by Black Hawk. 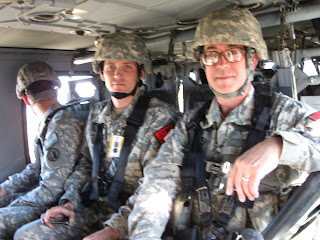 Funnily enough, I was not told we were being 'inserted' prior to the flight so it came as something of a surprise when I was told to determine my location and call in the 8-digit grid for a pickup.  Instead we just told them we were at the village and ready to be picked up, but then got lucky when a passing motorist on a different mission gave us a ride back to base. 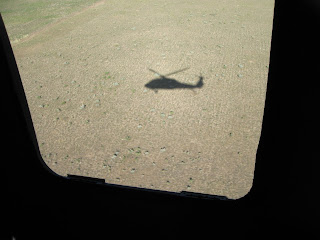 The week after that, I traveled across the country to attend a class then returned home.  The class was held on a joint Army-Air Guard post and I never bothered to venture onto the Air side of it, but passing the Air side on the outside, there is a B-29 sitting near the gate.  Next time I'm there, I'll have to take a pic to add to my collection.  So that was part of my big adventure and why I was unable to post at least of my game reports on time.  But enough of that.  The real reason I was posting here today was to tell about some more family gaming.

The day after I got back (late Friday night - so on Saturday), my 6-year-old wanted to play a game.  When I asked him what he wanted to play, he said, "Robo Rally!"  Really?  We had tried playing it once before and decided it was beyond both the 6- and the 9-year-old (perhaps a year or so younger at the time), but my wife and I both love it.  Well, I thought, we'll see how long this goes on.  I pulled out the game and set up a simple 3-point race covering  two boards.  I also modified it so that instead of laying out all five segments (a difficult concept for a 6-year-old brain to keep track of) I let him play his cards one at a time, based on the results of his previous move.  The result?  The little bugger almost beat me!  I got to the final flag one segment ahead of him!  He was then enamored with the game and spent the next two days laying out impossibly difficult courses.  We tried to actually play one of them and several hours later we still weren't done.  He eventually put the game away on his own initiative admitting that he needed the table space for a game of Milton Bradley's The Lost World: Jurassic Park with the daytime kid-sitter.

So, as pleasant as that turned out, even more heart-warming was my 9-year-old daughter asking me that same evening if she could go to game night with me.  You see, she had had a sleepover spa party with several of her friends the night I got home (it was actually for her birthday, which isn't until August, but one of her bestest friends is moving tomorrow and she wanted to make sure the girl was included) and was so wiped out, she spent most of Saturday afternoon asleep.  When bedtime rolled around she was wide awake.  I recognized this dilemma and consented to taking her to game night with me.

At game night, there were only five of us, including her, and we ended up playing Risk - one of two choices that were decided upon prior to us arriving.  This was her first experience playing Risk.  She had decided a few weeks previously that she didn't want to play it with her brother and me.  She ended up doing all right and holding her own for most of the game.  Unfortunately, she was strongest in North America (which wouldn't have been a bad choice for a base) and Asia (which, as everyone knows, is almost impossible to hold early in the game).  She tried to reinforce everything evenly across the board and ended up thrown out of North America (by a sixty-something-year-old man who found it appropriate to taunt a 9-year-old girl when he beat her by the luck of the dice).  She and I were peaceably cohabitating in Asia for the moment so I built up my forces and quietly trashed North America via Alaska.  The boob sat there dumbfounded as his superiority failed him and he lost all but one possession.  Doug, bless his soul, knocked out the last possession in his turn immediately following mine.

Anyway, we ended up calling the game a few turns later as we were playing on the porch and she was both chilly and finally feeling the effects of tiredness.  Looking at the board, we proclaimed Perry victor (his base was Africa and he had just taken South America from Doug, had a solid presence in Europe and was holding firm to the Middle East; while I held Australia and roughly half of Asia, Doug having thrown me out of North America in turn).  Fortunately she enjoyed the game time with daddy and his friends (the second or third time she's played with us).

So, the point is two new gaming experiences resulted in positive results for the kids and a lot of fun.  It won't be long before they are both gaming more hard-core games.  Unfortunately, I didn't get any pictures of either of the games described above, but I assure you they were as described.  I don't know when I'll have another battle report - I'm training for a new job and they're working me nearly 60 hours a week for the next couple of weeks and at the same time, I'm supposed to start some extensive on-line military training.  At any rate, Happy Gaming and I'll see you around the table.
Posted by Sundance at 7:54 PM