I finished up the truck and 20mm AA guns.  This will be pretty easy since Perry wants them in early war gray.  First, I prime them with whatever's handy.  I used to mostly use Testor's gray primer, but it's hard to cover with some colors.  I can't tell you how many coats of white I had to put on to cover my AWI figures.  Flesh tends to be a problem with the gray primer as well.  I was out of Krylon flat black, which I also use to some extent, especially with aircraft and microarmor, but I had some Rustoleum brown so I used that. 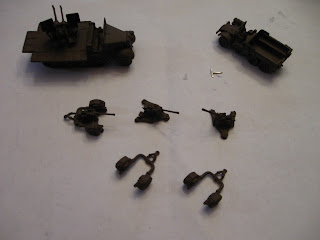 Then I gave everything a good solid basecoat of Vallejo German Grey. 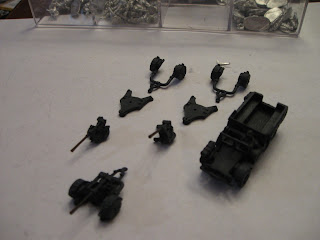 Even so, I find as I paint along that I often have to touch up spots I missed with the base color as I go.  After the base coat, I add some white to the German Grey and drybrush the equipment to lighten up the color and highlight the details on the model.  Couldn't get a good picture of this so we'll just move on.  I think you can see it to some extent in the last picture.

Since Perry likes the 'lived in' look that I give my vehicles, I dabbed some Vallejo Green Ochre in the wheel wells to look like dried, caked on mud. 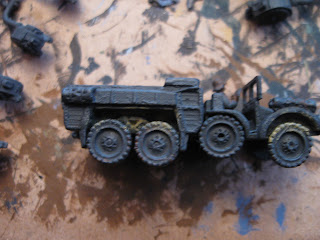 I then painted the tires on the truck and the AA gun trailers Vallejo Black Grey, and the guns themselves Gunmetal Grey. 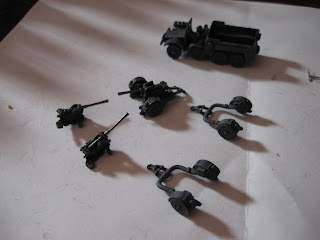 I then dabbed some Green Ochre on the wheels and chassis to simulate splatter. 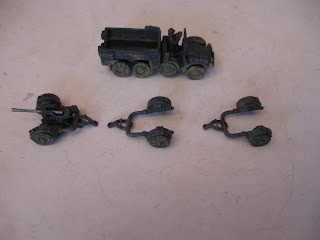 Finally, I picked out the details on the truck, such as the seats, the driver, the tarps, Jerry can, and other stowage in various appropriate colors.  When finished, I sprayed them with a matte fixative.  I think I used Grumbacher Matte for artists, which seems to work pretty well.  I've used Krylon's clear matte and Testor's also.  The Testor's tends to be a little finicky.  I haven't had too much trouble, but I did have a batch of ACW I was painting for on commission turn white on me and I pretty much had to start over.  That was frustrating as all get out. 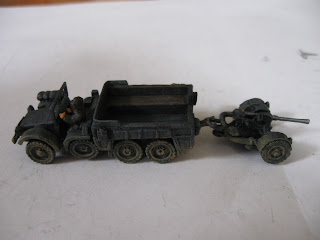 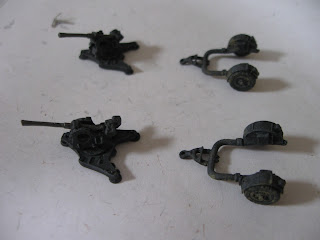 Next, I'll finish up the Sdkfz. 7/1 in the same way.  Perry and I tentatively talked about crews for the AA guns, as well, so I might have a Painting, Part III, showing how I do the figures.
Posted by Sundance at 11:44 AM