Yesterday I started a small commission job for a friend of mine.  I had really envisioned the blog as just a place to put games played or items of interest, and I've been tempted to put up pics of minis I've painted, but just focused on the games.  But he asked if I could do a step-by-step of the models I'm doing for him so he could get an idea of how I do it since he has a pile of miniatures, but is pretty much a beginner when it comes to assembling and painting.  I'm going to do this as a two part series so we'll start with cleaning and assembling in this post, then do the painting in the next post.

He brought me a Krupp 4 x 2 Boxer, a package of 3 Flak 30 20mm AA guns, and an Sdkfz 7/1 - that's the real flashy one with the fold down sides and the quad 20 on the back (the Flak 38).  These were all by Quality Castings/Battle Honors sold by Old Glory 15s.  The Krupp and the 7/1 went together surprisingly easy (still working on the quad 20 for the 7/1).  The Flak 30s took me a little bit of time because there were no instructions (such as Old Glory 15s instructions are) and I had to study some on-line photos to make sure I had a handle on how to assemble them.  There were three Flak in the box and we decided to do one in travel position and two in firing position.

First, we need a work area.  My work area is the last foot or so of the dining room table.  My computer and job search stuff occupies the adjacent one foot edge so it's handy for when I get frustrated and need a break. 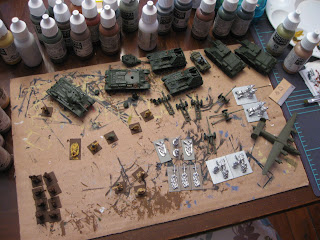 Second, we need our tools.  I have a couple of sets of hobby files, though the best ones I've found are the Xacto set.  I just can't afford it at the moment.  I also have a flush nipper, three different pairs of tweezers, single edged razor blades, a craft knife, superglue of one brand or another, toothpicks and miscellaneous other items. 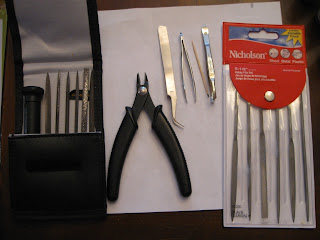 With this, we can get a start on cleaning and assembling the models.  First thing I do is use an appropriate file to clean flash and molding lines off the models as much as I can.  Sometimes you really have to look and poke and prod, because some of the stuff that needs to come off can look like it belongs there - until you start to paint it and you suddenly realize that you should have filed this or that bit off - and some of it can look like it should come off when it doesn't.  I always like to check out photos of the real thing so I have an idea of what belongs on the model and what doesn't.  I also try to fit the pieces together to see how well they go together and to see if I know where they go as well.

EDIT:  From a comment left for me on TMP, I should add here that after cleaning up the parts, you should check the fit of the parts to make sure they go together properly.  Sometimes you have to file a piece down a bit to fit properly.  Thanks for the suggestion, Marcus!

Here are the truck and AA guns cleaned and ready for assembly. 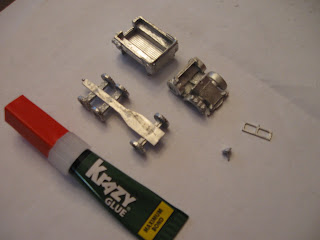 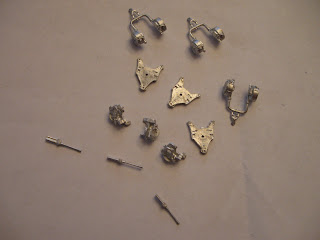 I put the wheels on the undercarriage first (as can be seen above).  Turned out to be a mistake as the one wheel was too far to the inside for the cab to fit over it.  I actually had to break the wheel off (Shhhhh!  Don't tell Perry!) then glue it back on once the cab was in place.  The gun barrels went on the frames pretty easily.  One I glued all the way down for the travel position, the others, I tried to point skywards at various elevations within the limitations of the molding.  They don't look too bad and you get the idea that they are shooting upwards.

The cab and truck back went on pretty easily. They just glue down to the chassis. There is a slot in them that fits the chassis fairly well. 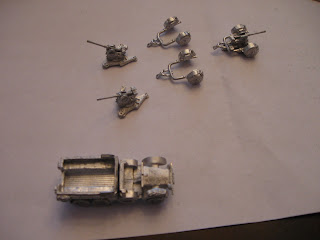 After the cab and back were secure, I glued in the driver and the windshield and the Krupp was done. 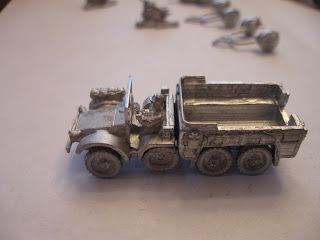 Next we assemble the 7/1.  First thing is to clean the pieces. 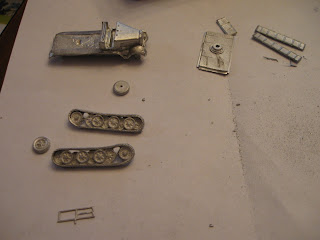 Then we assemble the halftrack body and the the gun platform. 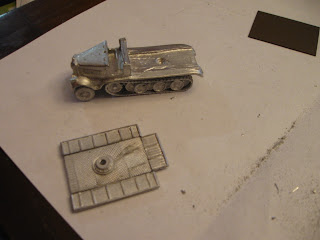 Once the two separate pieces are dried, I glued the platform to the back of the halftrack. 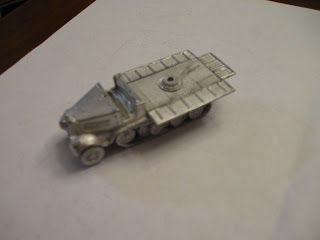 Finally we add the details to the halftrack and assemble the gun. 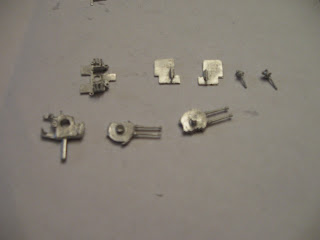 Glue the two gun halves around the center console.  I keep trying to glue this so that the guns can elevate, but so far, I've been too heavy handed with the glue and always glue the guns to the console. 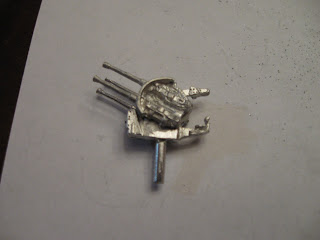 Then we glue the gun assembly to the floor plate. 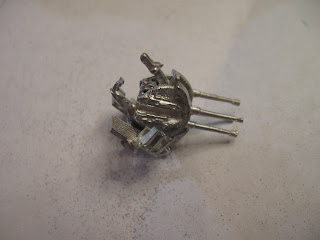 Next, we add the gun shields and the ammo handlers' seats. 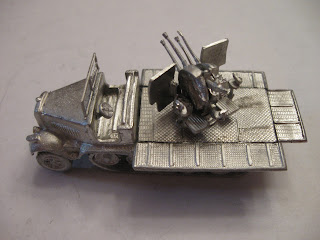 Voila!  We're done with assembly.  Next time we'll work on painting the models.
Posted by Sundance at 11:52 AM