I know I haven't posted much lately on here.  Between the military and my computer screen going and forgetting my camera when we do play one of my games (we played a Check Your 6! Jet Age game of Jordan vs. Israel a couple of weeks ago and I forgot my camera - Perry brought his, but he didn't really take any close-ups so I didn't see the point in posting) I haven't had much to post for a while.  But now I have a sort of a wargame to report on.

Well before Christmas I purchased David Okum's Snowball Wars from Wargame Vault.  I figured since I'd be home with the kids over Christmas break, it would make for a nice diversion.  For a variety of reasons, I didn't get it printed out and put together until today so tonight for Family Home Evening, we played our first game.  It took everyone a couple of turns to get the idea of how to move and throw snowballs, but it didn't take long for the mayhem and carnage to start.  Mommy got the first kill, hitting Adam with a snowball right off the bat. 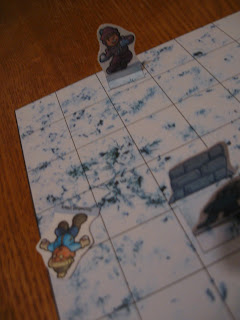 The game is actually a neat little game for what it is.  Players start the game by taking turns placing "terrain" (pine trees, snowmen, snow forts and fences).  Then they start the game.  Each turn each player rolls a die for activation points, which they can then spend moving or throwing snowballs.  There are a couple of special rules which allow players to dodge snowballs or do other things that don't cost activation points, but we kept it simple tonight, giving the kids (and Mommy) a chance to figure out how the game worked.  It went pretty quickly - about 1/2 hour or maybe 45 minutes from start to finish.  Adam was the first guy out of the fight followed by Julia.  Mom and Dad faced off in the end with me hiding behind a tree while she hid behind a fence. 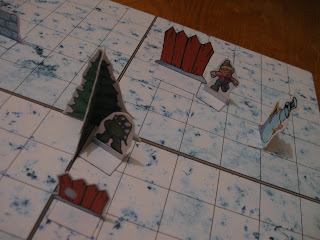 There wasn't much we could do, though.  It came down to us giong face to face as though we were in the Old West.  After three turns of facing off against each other, Mom got the magic die roll and finished off Dad with a snowball to the face. 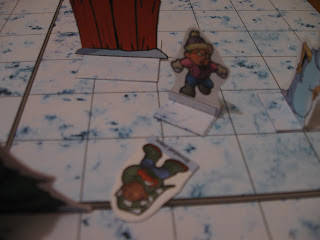 The only shortfall I found to the game was that there was no explanation of how to use the terrain for cover.  because of the nature of the game, we went with a simple line of sight.  If the los crossed the terrain, you couldn't see them (unless it was a snow fort of short fence, for which we gave a bonus to teh defender).  If you want to pick up the game, you can find it here Snowball Wars for $5, and for another $1 you can find the expansion pack here ﻿Elf Help .  Can't beat the price.  We would have played more but it's a school night so maybe this weekend...