Last week we played an air battle in the Falklands using CY6! JA.  The game started off with four Argentine A-4s barreling in to bomb a British ship, while two Harriers attempted to intercept.  Randomly, two more Harriers would join the fray as well as four Mirages.  As it worked out, the Harriers took out one A-4 on the ingress, but the Skyhawks were able to drop their bombs and beat a retreat with the second pair of Harriers entering while they were over the target.  One managed to hit the ship.  One was damaged on egress, and even turned back to take a gun shot at their pursuers, but the original Harriers had already turned for home.  The Mirages came on in a gaggle and managed to lose two planes before we called the game on the assumption that the tighter turning circle of the Harriers could keep the Mirages from getting the flank or rear shot they would need to fire missiles.

My 9-year-old daughter has played a couple of games of WotC Pirates! and Wings of War against her 6-year-old brother in the past few years, but this was her first actual wargame, playing with the grown-ups.   She flew the Mirages and certainly deserved better advice from me than I gave, but acquitted herself admirably and the other guys even said she was welcome back.  I just didn't have my head in the game or it might have turned out differently.

Unfortunately, I forgot my camera, but my wife was able to get a pic of the best photo op in the game when she randomly dropped in to check on our girl.  I got a couple of pics of the Mirages with my daughter's camera, which my wife brought in from the car, but she hasn't downloaded them yet.  I was having trouble figuring out her macro, but if any turn out decently, I'll add them later.  At any rate, here's the third A-4, hotly pursued by two Harriers, as it bombs the ship. 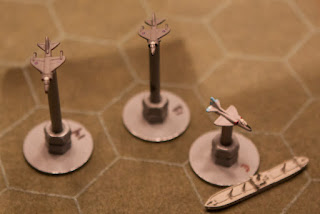 I'm away for some military training for the next few months, so there won't be much action on here.  I brought Traveller and Snapshot to do some solo gaming and I'm running an e-mail campaign for my game group.  I also brought ATZ and some of my zombie gaming stuff so there will be a couple games put on over at Wanted: BRAINS! in the next few months.  Unless I have something interesting happen in a solo game of Snapshot and decide to put it up here, I'll see y'all when I get back!
Posted by Sundance at 2:58 PM