So last night we did our first space ship fight using Full Thrust.  I've read the rules a couple of times and liked them for their simplicity without being beer and pretzels.  We've all played Star Fleet Battles and various other space battle games - in fact, we played a (for me) big game of SFB last week with four Romulans vs. four Feds.  I've never seen a Fed Command Cruiser explode with one shot before.  Now I have.  But I digress.

I just couldn't take the taunting that I perceived everytime I looked at GZG's webstore.  "Buy us!" they said.  "Buy us!"  Both the space ships and the 15s.  So I did.  I got the two fleet starter set and two packs of 15s.  Total came to about $60 with postage, which isn't bad considering they had to ship from England to the U.S., which is usually quite expensive.

Anyway, I painted up the ships - took about 3 or 4 hours to clean, assemble, prime and paint up the 16 ships between the two sets.  In each starter set you get a battlecruiser, a heavy cruiser, two light cruisers, two destroyers and two frigates.  These ships are about an inch long (the frigates) to about three inches long (the battlecruisers).  We used the six smaller ships in each set for our battle. 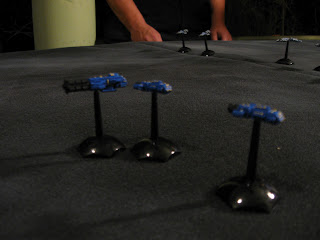 Two UNSC frigates and a destroyer.  ESU ships are in the
background.
The pictures are a bit dark because we were playing at night on Doug's front porch.  ﻿Should be a good effect for a space game, though! 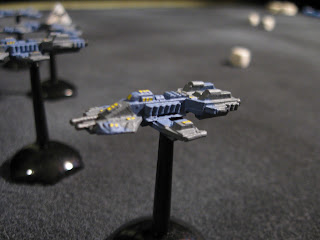 The ESU destroyers with the light cruisers in the top left
background.﻿
The ESU closed the gap quickly and while several of their ships took hits on the first turn of contact, they focused on one UNSC destroyer and wiped it off the map.  In the second turn of combat, the same things happened.  But then the tide started to turn and the damage caught up to them.  Very rapidly 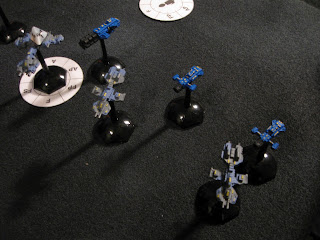 A strange picture.  The ships have crossed each other's
battle line and are turning back on each other.  The four-
sided die on the ESU light cruiser is simply to identify it. 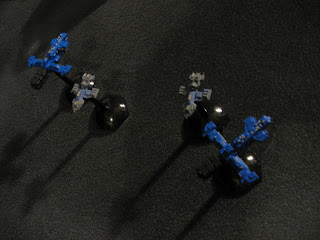 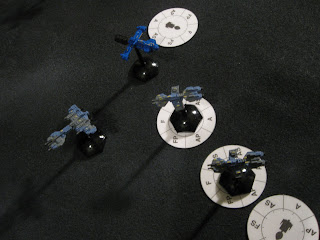 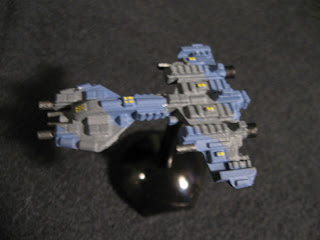 I'm very pleased with the way the ESU paint job turned out.
This is the light cruiser, one of my favorite ships of the
fleet - the other is the ESU battlecruiser.
I made the play aids by photocopying the fire arc diagram from the FT Light rules, then enlarging it so that the base fit inside the inner ring.  I copied it onto cardstock and laminated it for a little durability.  It actually came in very handy during the game - for turning especially - though a few of the ships still got off on some wonky courses.  There were a couple of cases ﻿where the firing arc diagram also helped us to judge if a ship was in the arc or not so I thought it worked out well.
Everyone enjoyed the game and the rules.  We had a couple of questions that we were able to generally resolve pretty easily.  One element that Doug commented on particularly was the movement.  He appreciated the way you had to use thrust to speed up, slow down and turn.  We all agreed using vector movement probably wouldn't add much to the game while slowing it down appreciably.  I like the damage rules.  Most of the ships in the game died before they became crippled via the threshold rule, but a few still ended up pretty disabled.  All of them had some kind of damage at the end of the game.
We all agreed that this is a great set of rules and everyone is thinking about which fleet to invest in themselves.  I'm looking forward to getting some more ships and expanding the games and rules we use.  As you can tell, I can't say enough good stuff about this game, the models, and the manufacturer support.
Posted by Sundance at 3:52 PM