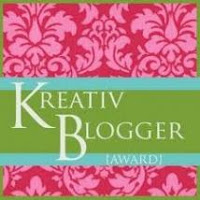 My imagi-nation, the Democratic Republic of Yerbouti, received an award - the Kreativ Blogger Award - way back in May and I just noticed the other day.  D'oh!  You can go click the link to the right to read the latest news on Yerbouti, which, by the way, I need to update as I promised an interview with the workers in the sweatshop newly established in the capital city of Wacca Jawacca by none other than the smokin' hot, bodacious Kathy Lee Herself (and yes, we capitalized that on purpose).  Yes, it's frilly and flowery and pink, but it's pretty cool to have someone say, 'Hey, neat idea - great job!'

So, as part of the award, I'm supposed to tell all of you ten things about myself that you don't know, which should be pretty easy since with very few exceptions, none of you know anything about me, and I'm also supposed to pass the award on to six other blogs, which will be much more difficult as I don't generally read blogs, though there are a few that I like to peruse on occasion.

1. I speak Arabic.  The Army taught me.  I volunteered for it knowing that was the language I was getting and I didn't have any choice of language.  Oh, well.  It is kind of cool - sort of like a party trick.

2. I fly.  No, really, I do.  At least I used to.  I have my private pilot's rating.  Just can't afford to do it anymore.  I was half way through my instrument rating when I ran out of money.  Hopefully someday I'll be back in the air again.

(This is harder than I thought it was - trying to come up with at least interesting things for you to read . . .)

3. I am a 'fan' (I guess you could say) of the Red Baron.  I have every book I've been able to track down about him (including Snoopy vs. the Red Baron) and original Sanke postcards of he and his brother.  I've been fascinated by him since I was a kid of about 9 or so.  (You should see a pattern being established here - my first love in life was aviation, developed at a very young age.  Fortunately - or unfortunately - my 5-year-old has of late developed a similar love for both air and space.)

4. I just recently got my 15 year pin as a Boy Scouts of America volunteer, although it's actually been more like 17...

5. I have had the great fortune to meet some interesting characters in my life.  Among those I've met that would be of interest to you have been a survivor from the Bismarck, one of the Bock's Car crewmen, a crewman from the U-505, a Stuka pilot and a Ju-52 pilot, a couple of Rangers who scaled Pointe du Hoc, my wife's great uncle who fought as a Canadian in the 1st Special Services Force in Italy (my own uncle was with the Canadian engineers at Normandy), and various and sundry old timers who fought in WWII - all with interesting stories to tell, including two guys who were my dad's close friends in the Marine Corps during the war, but lost touch after they came home.  I count among my friends Cory Wells of Three Dog Night, who is also a wargamer.  In fact, that's how we got to know each other - we used to play Avalon Hill's Air Force by mail.

6. One of my coolest vacations was to Japan for my brother's wedding reception.  While there I got to go to Chiran, the kamikaze base.  It is a sobering and amazing place to visit.

7. As you've probably guessed, I have close ties to Canada.  My ancestors settled Quebec (I hope the rest of you will forgive me for that), and my mom and wife are both Canuckians.  I was actually made an honorary Canadian by the Winnipeg ASL Club several years ago.

8. I have way more figures than I can paint in a reasonable amount of time.  Bet you never saw that one coming.

8. One of the coolest places I've ever lived (which only include four places - Chicago and one of it's surburbs, Johnstown, PA, and . . . ) was Monterey, CA, while attending the Defense Language Institute learning said language Arabic in number (1.) above.  Got to go to Laguna Seca (for free), got to hang around Pebble Beach (for free too - nope, couldn't play, just got to hang around), went whale watching (had to pay for that one), did the usual tourista thing, got a couple of free boat trips, saw the house that was U.S. Grant's headquarters following the Mexican-American War, and did a few other cool things there.

10.  I used to be a part-time cop.  The town I worked in had something like 15,000 hotel rooms, a major concert stadium/sports arena, a theater and a conference/convention center so they needed lots of part-timers to direct traffic, etc.  Fortunately, they liked me, I worked hard and didn't cause any trouble for them, so I was able to get into some cool gigs like patroling the village in a squad car and on a bicycle, I was on an emergency response team for crowd control, etc., and did some other neat things.  I got to meet a few sports and music figures through that job as well and had lots of fun doing it.

So there.  That was a lot harder than I thought it would be!  Probably boring stuff for you to slog through, but hey, it was the rules of the game.  Now comes the really hard part - passing the award on to six other blogs.  OK, the first two are easy:

1. Bongolesia, by Mike Murphy, my inspiration in creating Yerbouti in the first place - not to mention that Mike is an awesome guy.  Fact is, I think he's won this one before, but IMHO he deserves another ribbon!

2. The Angry Lurker.  He was one of my first followers (if not the first) and always has some interesting or creative things on his blog.

And number 3 wasn't too hard to come up with either:

3. Have to give one to Shelldrake's Zombie Wargame Blog where you PBB (Play By Blog).  IIRC, you send in your moves each week or whatever the period is and he updates the battlefield, calculates the fights, etc. and you see if you live or die.  I thought that was incredibly clever.  I've played by mail and played by e-mail but never by blog.  Outstanding idea!

Now it gets tougher.  Like I said, I don't really read many blogs so I'm now going to have to hit cyberland to find the ones I do read that I especially like.  This isn't to denigrate anyone else's blogs - I just don't surf that much.  My wife is really the blog reader in the family.

I think that will have to suffice for now.  I have three more to give away and will amend this as I surf around and find that ones that really impress me.  Thanks for reading and for your support!
Posted by Sundance at 7:46 PM