I realized it's been a while since I did anything with any of my blogs and figured it's time to post SOMETHING!  Not last Saturday, but the Saturday before we played a game of Roman Seas.  We really like the rules even though there are a few glitches.  A little logic irons out the problems and it does create a fun game.  We had four large Saxon raiders up against a Roman fleet of two scout ships, three hemoilas and a Liburnian command ship. 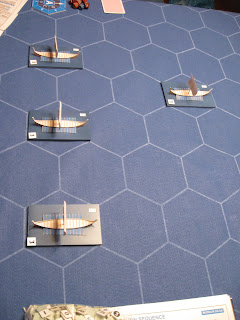 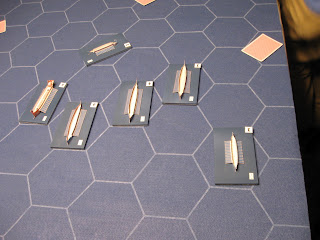 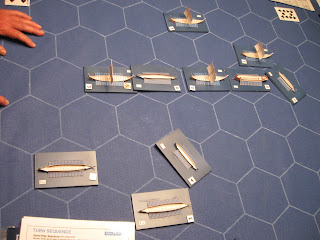 The points for both fleets were almost identical, but the Saxons, whose crews man the oars and fight, had significantly more manpower for combat than the Romans, who have separate rowers and marines.  The Saxons would row up to a Roman ship then grapple it, using their greater manpower effectively in hand-to-hand combat.  The Saxons completed hosed the Romans (thus the title of the post), who only escaped at the end of the game with one or two ships with relatively intact crews. 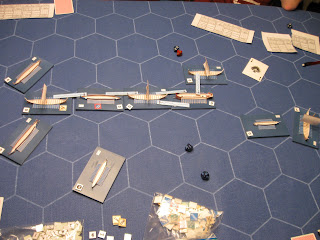 I think this was the final position, or close to it,
of the ships.

This was the second time we played the game and had a good time both times.  The first time, we used the boardgame that comes on the disc with the rules.  It uses cardboard counters for the ships rather than the miniatures.  We did use a bunch of the ships playing another set of rules, which was ok, but Roman Seas were more fun. 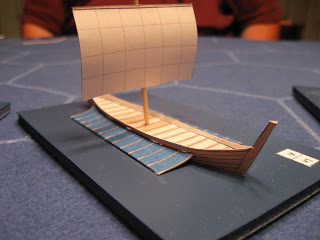 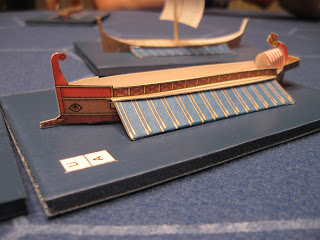 The ships are mounted on foamcore board that's been spraypainted dark-ish blue.  You can get blue foamcore board but I already had some green board and some blue spraypaint and I didn't want to spend more money for the blue board.  I mounted my first set of ships on artist's mat board, but the bases all warped from the spraypaint and disfigured the ships or pulled free from them.  This seemed to work much better.  It takes me about 15 minutes to cut out a ship, and I cut out several then glue them in turn with Elmer's glue applied sparingly with a toothpick.  It dries pretty quickly that way and doesn't make the color run.  In this way, too, I can assemble four or so ships in an hour and a half to two hours.  I forgot how I had done the inboard details so only one or two ships got that, but now that I'm back up and running, the next batches will all get it.


Next time we play, I'm going to create counters for the marine units so that it's easier to keep track of who's doing what, which was rather tricky.  You can use 6mm figures with the ships, but I don't have any, can't afford them at the moment, and really don't feel like painting them right now anyway!  We'll also do a more traditional Romans vs. Carthaginians battle so both sides have more or less equal ships and crews.  All in all, though, we had a good time.
Posted by Sundance at 5:19 PM