Yes, you read that correctly - we played a battle between trucks in the desert.  Specifically, it was a battle between T Patrol of the LRDG and the Italian equivalent, the Auto-Saharan Company, which took place on 31 January 1941 north of Bishara.  T Patrol found the well at Bishara destroyed and fresh tracks, so they headed north to hide in some low hills for a bit. 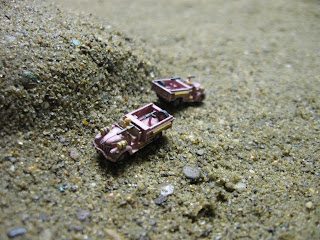 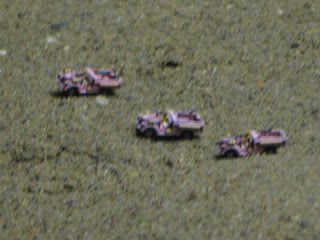 ﻿
﻿
Yes, I know not all LRDG trucks were pink, but I like the
look of them.  It's sort of the quintessential LRDG look.
Of course, my wife made fun of me while I was painting
them and the last thing Steve said after the game was,
"No more pink trucks!"﻿

The Auto-Saharan Company spotted them and charged in to attack.  The LRDG had eleven trucks and 44 men, while the ASC had seven trucks, four of which were armed with the 20mm Breda, and 28 men. 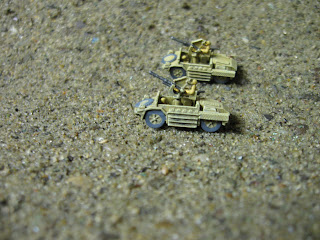 Two of the ASC trucks with the 20mm Breda.

About half of the LRDG trucks survived and escaped, with no losses for the Italians.   ﻿In an incredible story of survival, four of the LRDG men walked about 150 miles over nine days across the desert before being found, starting their march with only two gallons of water.  Along the way they found a two pound can of plum jam that had fallen off one of the trucks on the way in.

In the game, the Italians tried to sneak up on the LRDG from the north, sending three trucks up behind a hill to do some reconaissance, while the four Breda armed trucks tried to stick to the shadows of a low ridge to their right.  They were discovered and the fight went back and forth for some time.  In the end, both sides had one operable truck left, though I think the British had more surviving crews so they got the victory.  The Italians didn't call in their resources, including air support and a pair of AB-41 armored cars, all of which were used historically and probably would have guaranteed them the victory. 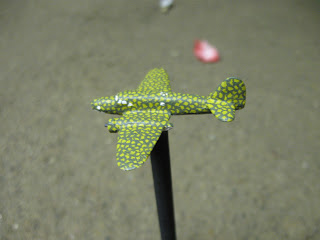 ﻿
Although this is a Ca.310, the ASC had dedicated air support
in the form of three Ca.309s, but try finding a 1/300 model
of the Ca.309.  Can't be done.  And yes, I realize that I don't
have decals on it.  I just finished painting it about an hour
before the game and I keep forgetting to order the Italian
decals from Dave at I-94.

﻿
We used a set of homebrew rules that I had been pondering for some time, but finally knocked together just a few hours before the game.  The basic concept worked all right so I have some work to do to round them out and do some playtesting.  All of the vehicles and dismounted crews (British and Italian infantrymen, respectively) were GHQ 1/285, and the aircraft, I believe, is a Scotia 1/300.
﻿
Posted by Sundance at 8:42 AM