OK, I figured it's about time to post another old game on here.  We played Spencer's Ordinary (Virginia, 1781) this past weekend, but there was one little glitch.  Well, actually two.  First, I forgot my camera.  I haven't gotten in the habit of remembering to bring it whenever I ref a game.  Second, The Americans nicely moved up the road and got into line in the edge of the woods opposite the tavern, while the Queen's Rangers lined up along the hedge adjacent to the tavern facing the Amis.  The Americans took one casualty from the 3-pounder sited on a hillock adjacent to the road, but they were unfazed by the loss.  Then the American cavalry decided to charge the cav of the QR.  The first time they did it, they were simply bounced.  The second time they tried to do it, they completely failed their pre-charge morale check and ROUTED!  This was bad enough, but they probably could have rallied at the end of the turn due to their elite morale.  To add insult to injury, though, their rout move carried them off the table.  Game over.  This is a tough enough scenario for the Americans, but without their cavalry, they are pretty much done for.  I think Perry got some pictures of the set-up at least so I'll see if he'll let me post a couple of them.  Not much to see anyway.  Move along.

One of the guys in our game group wanted to know why we didn't play a Zaitzev vs. Koenig type of scenario.  We explained that if played properly, neither sniper would ever see the other one and we could play hours without ever being able to take a shot.  However, I had a scenario up my sleeve that I'd wanted to play for a long time and offered it up since he wanted some sniper action.  It is pretty close to an actual event.  In the fall of '44, some armed civilians from the village of Beauchamp, Belgium, showed up at a US Army cavalry HQ.  They had been trading potshots with four German snipers in the village all day and were getting tired of the cat-and-mouse game.  They wanted some professional help and some heavy ordnance.  Troop HQ and an M-10 accompanied the civilians back to the village and, along with the locals, proceeded to hunt down the snipers, finally cornering them in a shed and summarily dispatching them.  I didn't have firm numbers on the civilians, but I had the M-10, the HQ section and the snipers.  In fact, they are featured in the photo in the heading of the blog.  We used the Tactical Commander rules with a couple of small modifications, which I don't remember now, but basically reduced the movement rate. 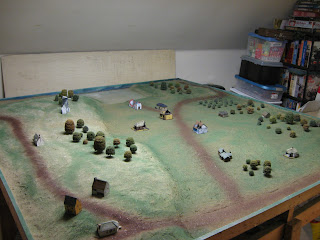 The layout.  Not knowing what Beauchamp looked like, we
just went with a generic layout of village in center, wooded
ridge to the left and woods and orchards to the right, with a
bit of river at the far end.

The Germans were allowed to set up anywhere on board.  Three of the snipers began on the ridge with excellent crossfire opportunities.  The fourth sniper﻿ set up in the large tree in the woods at right.  His plan was to create confusion by shooting into the rear of the Allied forces.  He never got to fire - the Americans were too close the whole time, entering adjacent to the woods and remaining adjacent or in the woods the whole game.  The Resistance entered through the woods and orchard farther up the right hand side of the table.  This is Doug's sand table, by the way.  We play most of our games here. 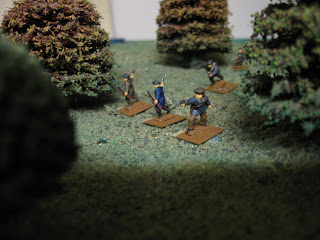 Some of the Resistance fighters about to leave the woods
and reenter the village. 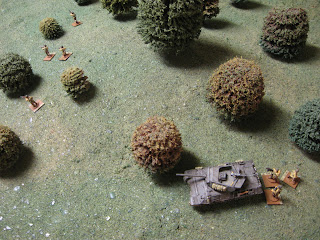 An aerial view of the M-10 and troop HQ.  One of the
snipers began the game in the large tree at top center.
The game was over before the Americans moved far
enough to let him safely open fire. 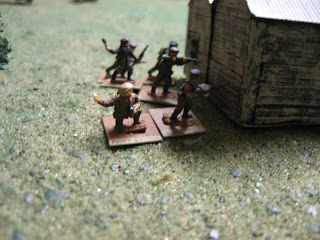 Some of the Resistance hunkered down behind a garage.

The game transpired fairly interestingly with both the Americans and the Resistance using sound tactics.  Problem was the snipers were just too good and the Allies didn't coordinate their efforts.  The Americans didn't advance fast enough, prefering to reduce every potential hiding place with the M-10 before the infantry would show themselves, while the Resistance advanced through the center of the village and took a heavy beating from the snipers as they crossed open spaces and tried to see around buildings rather than taking cover prior to the next advance.  This was especially deadly in light of the German's cross-fire ability.  In the end the Americans were just coming around the end of the woods into the village proper when the Resistance was already in the center of the village and pretty much dead, having taken 50 to 66% casualties - I don't remember the exact numbers now.  At that point we pretty much figured the snipers had won.

No game this weekend as we'll be heading out to Cold Wars on Saturday, but next weekend we'll try another - larger - AWI game.
﻿
Posted by Sundance at 8:26 PM