Played a game of the skirmish at Gloucester Point using 1776 on Saturday evening.  In this action, Tarleton and his men have been out foraging and as they're returning to the encampment, they are set upon by the Duc de Lauzun and his men.  The goal for the British is to get the wagons off the board.  The goal for the Allies is, of course, to stop them.  The sides are pretty much even - both have 12 figures of cavalry, and about 24 figures of infantry, give or take.  At start, Tarleton is set up in a field to the west of the road, and he has the 17th foot and some of the Queen's Rangers infantry in a wood to the east of the road.  The British also have a battery of 9-pdrs in a small redoubt about 1/2 or 2/3 of the way across the board.  The wagons enter on turn one, followed by the Duc on turn 2, then the Legion Etranger infantry and some Virginia militia on turn 3.  The British infantry shifted laterally towards the road on this turn while waiting for the bigger action.

On Turn 2, the cavalry squared off letting the wagons gain some ground up the road and the British infantry in the woodline shifted towards the road again.  Trading shots, the French cavalry took two casualties to one for the British. 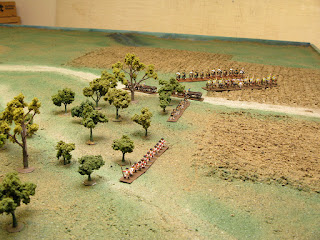 Here you see the British infantry in the woodline, the
wagons on the road, and Lauzun's Legion facing the
British Legion in the distance. 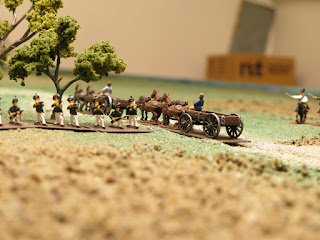 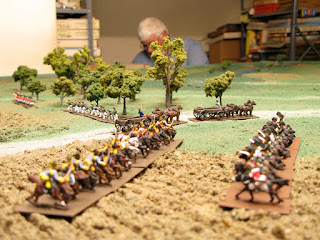 The cavalry lines, just before the charge.

On Turn 3, the both cavalry declared charges, but the pre-charge morale test resulted in the French Halting for 1 turn, while the British Legion charged.  The American infantry entered and exchanged shots with the Queen's Rangers riflemen to no avail - no damage on either side.  When the charge melee was resolved, however, Lauzun lost and routed.  Unfortunately, again, since they were so close to the board edge that they routed right off the board.  Since the infantry had no hope of catching the wagons, it was game over in the British favor.  I just realized that I miscalculated the melee numbers for the British - I based their numbers on 12 figures, but they only had 11.  I don't think it would have mattered though, as they rolled low enough to beat the required roll.  I once again forgot my camera so thanks to Perry for the pics!  Over time he's become our de facto game group photographer.

All of these figures are Essex, and they don't make some of the specialty figures needed for this battle.  All of the French are Revolutionary Era figures.  The British Legion are Napoleonic Era dragoons, with the chest cordage filed off - you can still see the stand up collar and waist sash, though.  The Queen's Rangers are actually modified American light infantry.  I cut off the bayonets, filed off the cap brim and glued bits of string to the hats for the decoration.  If I'd had photos from the battle at Spencer's Tavern a couple of weeks ago, you would have seen the Queen's Rangers in all their glory.  With all the good lines of AWI in 15mm available now, I guess it's time to start replacing my old Essex with newer, nicer figures.  Maybe a unit at a time or so...

Went to Cold Wars last week.  Lots 'o' fun.  Spent most of the day in the flea markets and the dealer hall.  Picked up three sets of rules and five or six books for about $20.  I call that a stellar day!  Unfortunately, the game we really wanted to play - Pirate Raid on a Spanish Convoy, by Rick Stakes, was cancelled due to lack of participation.  He wanted twelve players, needed six at least and we three were the only ones to show up.  It looked like a blast and we spent a good half hour or 45 minutes talking to Rick anyway.  He hand builds all of his sailing ships.  They are beautiful, though comparatively simple since they are for gaming rather than display and he uses his own rules, which are also elegantly simple but very well done.   (We heard a LOT of games were cancelled due to a lack of participation.  Seemed to us attendance was way down.  It was not crowded at all.  No doubt, HMGS will be raving about another record turn-out in no time, though.)  We ended up in a game that sounded good on paper, but turned out to be rather mediocre at best.  CAUTION: **RANT AHEAD**

In the PEL the game was billed as a historical battle, but when we got to the table it wasn't: the forces had no resemblance to the actual battle at all and the terrain only resembled the actual battle in the vaguest Picaso-esque way.  OK.  Once I adjusted to that, the rules were computer moderated.  Now, I've always been rather dubious of computer moderated rules, but now - having played them - there was nothing that I saw that would interest me in purchasing, or even playing, them again.  I might try a different set, but certainly not this one.  EVERYTHING in it seemed to be random - and I don't just mean combat results or morale tests - I mean EVERYTHING!  At the end of the game, looking at the disposition of forces, it looked very much like the enemy had won.  According to the computer, though, we won.  Things happened in the game that we couldn't make heads or tails of, and we're fairly well read in this period of history - in fact, this particular period was my major area of study in grad school.  The computer and GM had units doing things that would NOT have happened in this war let alone in this battle.  Oh, well.  After another bad experience a few years ago, I swore I'd be more careful in picking games.  We should have joined Patrick Hreachmark's shoot-out on the riverboat.  Patrick is another outstanding GM - never had a bad game with him.  I'm sure that would have been a blast!
Posted by Sundance at 7:57 PM