Although I already have two blogs I can't keep up with, I thought I'd add a third one to highlight the usual gaming that I do.  My first two are an imagi-nation - the Democratic Republic of Yerbouti - and a zombie gaming blog.  This one will show everything else that I do.  Which is a lot.  My wife just shakes her head.

Mainly, I want to highlight my figures.  Some of them are pretty ordinary, but some of them I have to admit I'm very proud of, having put a lot of work into them.  I'm almost embarassed to admit that some of my 15s take almost an hour per figure to paint (I'm a slow painter anyway - even with a cruddy paint job I can only finish about five of the little buggers an hour on average), and the Old West 25s can take up to three hours depending on the complexity of the figure.

My WWII figures in the header are a good example of why it takes me so long to paint.  I brought them to the shop of a friend who's a professional painter once.  He opened the box, glanced at them, said "Oh, I see you paint all the unnecessary details," and closed the box.  He took a better look at them later and agreed they are beautiful figures.  But yes, it takes me forever to paint them.

I have some catching up to do, since I intended to start this a few months ago. I do have a couple of games to post so I will go ahead and start with an Old West shootout that we did a couple of months ago.  Basically, we each picked a location in town where our characters began and just started shooting and moving from there.  We were using the Desperado rules and it didn't take long for the blood to start flowing. 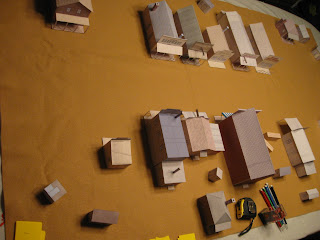 I'm having trouble rotating this image, but it shows the
layout we were using.  The buildings are all Whitewash City
on a plain 3 x 5 tan felt mat.  The big building at the bottom
right is the saloon (seen below), with the sheriff's office and
bank to it's left. 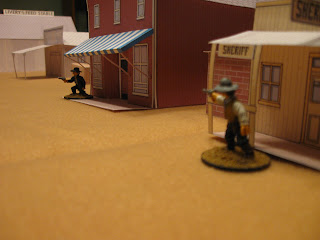 At this point I don't even remember who was who.  I think
Doug was in front of the saloon.  I remember I was in the
second floor window above him.  When he got wounded
he dove through the window behind him. 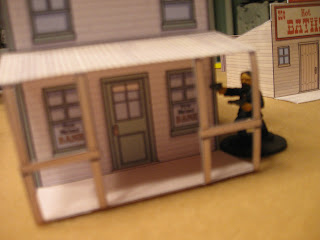 This was me coming around the corner of the bank after
running out the back door of the saloon and around behind
the sheriff's office and the bank.

Just so you know, no one won the game!  If I remember correctly, Doug and I were the last two standing and we bled out on the same turn.

In my other blogs, I put a list at the right of the websites of where I get my wargaming figures and such.  That would turn out to be quite a list without a narrow focus but I will include that information in the body of the post.  All my Old West guys are Dixons, the buildings are all Whitewash City as noted above, and we used the Desperado rules.  I have several other sets, but I'm most comfortable with these for the Old West.

Looking at these pictures now, I'll have to make sure I do a better job with the photography from now on so the figures are clearer and can be seen close up.﻿  Anyway, I'll post some more later.  I have a WWII battle on film (or at least on digits) and another Old West fight with Apaches attacking a mining camp, and in the next few weeks we'll be doing an AWI battle and a WWII coastal battle or two.  Somewhere in there we're heading off to Cold Wars as well.
Posted by Sundance at 8:07 PM